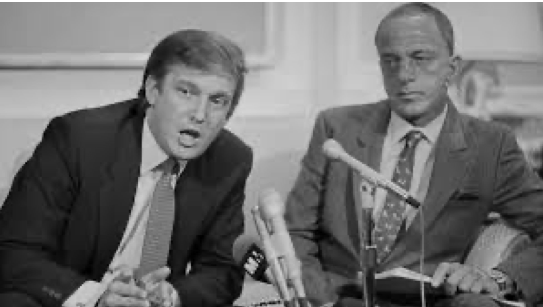 INSIDE POLITICS---At one point when he felt under siege by possible indictments and impeachable offenses, the president whined petulantly, “Where’s my Roy Cohn?”

The question became the title of a documentary on Cohn’s life and career that made one feel after viewing like taking a long hot shower. Cohn blithely represented a number of high-ranking organized crime capos—as well as the president of course (in his younger day -Cohn died in 1986). His reputation for ruthlessness was surpassed only by his reputation for hypocrisy as a closeted gay man who, when he worked for Senator McCarthy, had no problem trashing the reputation of other gay men.

Now the president has found his Roy Cohn -- in Lamar Alexander, Lisa Murkowski, and all the other Republicans in the Senate who voted to end the first ever impeachment trial that subpoenaed no witnesses and requested no documents. As e.e.cummings once wrote:

“A politician is an ass upon

Which everyone has sat—except a man.”

Women, too—here’s looking at you, Lisa.

But politicians do not have to be sat-upon asses devoid of principles. I don’t know about you, but in the heroic eloquence and poise of Adam Schiff, I saw something presidential. Maybe not this cycle, but down the road.

It was hard to choose the most outrageous aspect of this Moscow-like show trial -- McConnell’s brazen partisanship even though he swore himself to impartiality; Dershowitz’s cockamamie “arguments” that came right back down to Nixon’s “if the president does it, it’s not illegal”; the general weakness of the defense’s rationalizations of the president’s behavior; the abject, feckless refusal to interview Bolton; or the fact that the president’s lawyer, Mr. Cipollone, continued to defend the president even as it emerged that Cipollone was in at least one meeting that made him a direct witness of the president’s perfidy.

Polls suggest that 75 percent of Americans wanted witnesses. That statistic, given myriad other evidence that the polarization around Trump is more like 50-50, is arresting. It suggests something hopeful about the body politic—that, unlike the Republic senators, even for Trump supporters, basic fairness trumps mindless cultism.

(Winslow Myers, syndicated by PeaceVoice, is the author of “Living Beyond War: A Citizen’s Guide,” serves on the Advisory Board of the War Prevention Initiative.) Prepped for CityWatch by Linda Abrams.