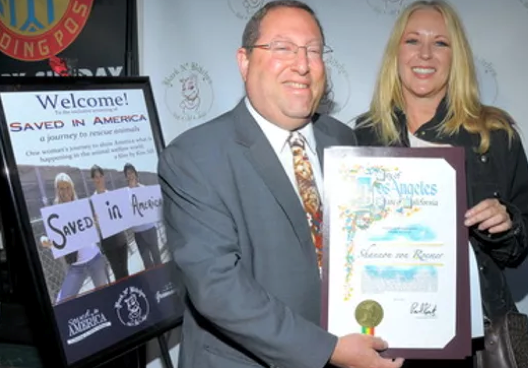 A second such honor was also issued to its owner Shannon von Roemer. (photo above)

Bark ‘n’ Bitches, a licensed, 7-day a week adoption and retail pet supply operation, has saved thousands of homeless animals’ lives since it opened in May 2006. Its outreach program has generously helped scores of lesser experienced rescuers find loving homes for strays that they find across the city.

But two weeks ago, LA Animal Services (LAAS), Mayor Eric Garcetti’s deadly, high-kill impound, seized 17 healthy, clean and adoptable animals from the store because it decided a few months ago not to renew its permit after a decade-and-a-half of successful, lawful and compliant lifesaving.

A few months ago, as Bark ‘n’ Bitches staffers readied the store for the day, including the cleaning up of the dogs’ overnight mess, LAAS showed up unannounced and cited the store for “unhealthy” conditions. LAAS has refused to show to this column photos of those alleged conditions. It subsequently decided that that warranted a non-re-issuance of its permit, without even a hearing to address the issue, even though LAAS at the time had already accepted a renewal fee for its permit.

For LAAS to show up and cite the store while staffers were cleaning up and preparing for the day is akin to citing a mother for her baby having a dirty diaper-- just as she is changing it.

Tragically, four of the seized dogs from Bark ‘n’ Bitches were recovering from spay/neuter surgery the day prior, and one of the dogs, Cossette, a tiny 10-week old puppy was about to be adopted and go home with her new family that very day. The adoption consequently fell through. Also, LAAS has refused to allow the dogs to stay in the homes of Bark ‘n’ Bitches staffers, including an elderly Labrador, Rudy, who I offered to foster in my home for as long as needed.

Instead, these dogs are now languishing in putrid and stressful LAAS kennels at taxpayer expense.

Putrid, as in the LA City Council committee which Koretz chairs, Personnel and Animal Welfare (PAWS), recently launched an investigation into hideous conditions at LAAS. This includes dogs being soaked in their own feces and urine, without a place to lie down due to it being mixed with puddled rainwater that won’t drain, as well as enduring the flies and fleas that thrive in those dangerous conditions. For years, Koretz has ignored other insufferable LAAS conditions, including green and brown “drinking” water. However, even he could no longer ignore LAAS’s most recent troubles, thanks largely to social media posts like those on Citizens for a Humane LA’s page on Facebook.

This smacks of retaliation for Bark ‘n’ Bitches being an alternate place for people to adopt animals who are saddened by the conditions and killing at LAAS’s pounds. Since the raid two weeks ago, City Hall, including City Attorney Mike Feuer’s office, has been non-communicative with von Roemer and her attorney. No charges have been filed against her or Bark ‘n’ Bitches.

If anyone anticipates Koretz entering the fray and bringing common sense to the situation, it may not happen any time soon. So far, he has punted to Feuer’s office while the animals linger. But there are elections ahead. Koretz has announced his interest in becoming the next City Controller and look for Feuer to run for Mayor at some point. Remember this story and their silent, lingering victims when they ask for your support.

Von Roemer tells me, “. . . it saddens me that my city, which Bark ‘n’ Bitches helped at the forefront of its groundbreaking anti-puppy mill pet shop ordinance, is the same city trying to destroy the very first example of what can be done to help save the lives of homeless, abandoned dogs.”

And here’s a little extra nugget. Twenty years ago, I lived and worked in downtown LA and discovered a large, distressed mama dog hiding her litter under what was then dilapidated tenements at the corner of Sunset and Figueroa. I worked with LAAS officer Armando Navarrete, who donned his gear, went under the crumbling, abandoned building and saved every pup, each of whom was soon adopted.

But when nobody stepped up to help the mama, she was adopted by none other than Shannon von Roemer, who saved her because nobody else did. Renamed Isabelle, the mama dog lived more than eight comfortable years in her clean, safe and loving home until her passing.

Due to a personal matter, Koretz has not responded to multiple requests to field questions about this situation but will be pressed this week to find a better temporary remedy than warehousing healthy, homeless animals who literally have homes to go to, except for City Hall preventing it.

The overwhelmingly tragic irony is that the kennels that are pointlessly being occupied by von Roemer’s rescues could instead be used to keep alive animals that LAAS is likely to put to death this week. . .for lack of available space.

Look for a heck of a civil lawsuit against the city down the road.