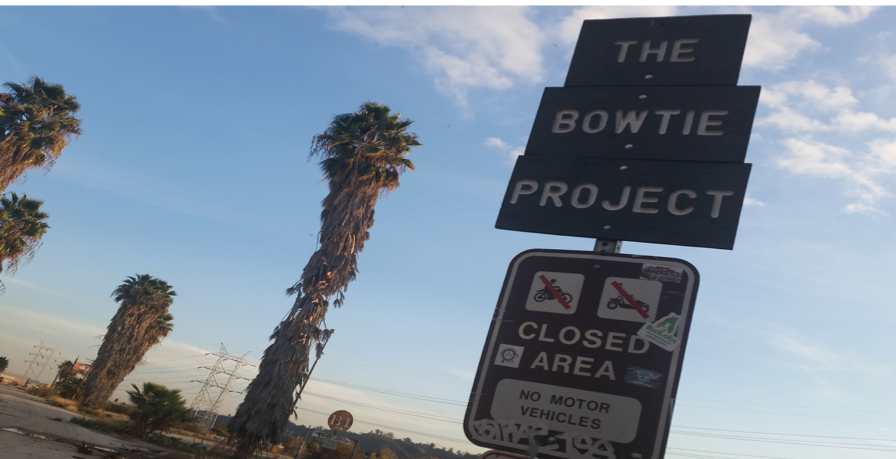 Coincidentally, Dec 16 was the same day when The Nature Conservancy (TNC) was notifying the surrounding neighbors of Bowtie (Parcel G1 in Taylor Yard) about the Soil Sampling that would soon take place. This activity would be carried out at the north end of the 1-acre parcel of the 18-acre Bowtie site near 2780 W. Casitas Avenue. It would go for three days starting that morning at 7 a.m. to 5 p.m., according to the notice by Weston Solutions.

The Bowtie site is surrounded by a tight mixture of residential communities, industry, and manufacturing facilities; the long, odd shaped site sits between active train tracks on the north end and on the south by a maintenance road plus the LA River.

There were about three-dozen people present, from neighborhood council board members, nonprofits, high school students from the northeast area to L.A. City employees with an interest in the LA River.

The abrupt Soil Sampling notice triggered the concerns of residents living by the Los Angeles River near Bowtie. Last spring, some of them had witnessed clouds of dust rising from the contaminated G2 Parcel as trucks drove through it with no advance notice until after the fact. However, this time “the contractors will use special machines to avoid soil from getting into the air. Work areas will be fenced off. All staff are certified in the safety and sampling of soils”, read the Weston Solutions notice.

Jill Sourial, Urban Conservation Program Director, presenter for The Nature Conservancy (TNC) made statements differing from the Weston Solutions notice such as the soil sampling would start the following day, a crew would work on the north end of the site while the rest of the site would remain open to the public. However, the notice stated that work areas will be fenced off, and the site is considered a contaminated site.

Several residents questioned the lack of community outreach, and the public exposure to health risks. “It seems that our health and our children’s health doesn’t matter,” voiced a resident to the lead agency.

Ms. Sourial explained that The Nature Conservancy (TNC), a nonprofit is the applicant for the Targeted Brownfield Assessment, and it received a grant from the Environmental Protection Agency (EPA) for a special program to conduct Soil Sampling at Bowtie. TNC works with EPA which contracts with outside agencies to do the work. The contractors schedule the job when they have an opening. “Sometimes we have no control over the contractors’ scheduling,” she said.

In addition, TNC is working in conjunction with the owner of the 19-acre Bowtie (CA State Parks) while the Cleanup oversight agency is the Department of Toxic Substance Control (DTSC), according to envirostor.dtsc.ca.gov.

Though soil samplings were conducted in 2003 when CA State Parks purchased Bowtie, and later in 2015, the testing did not cover the 1-acre north end area of Bowtie. Presently, TNC would like to determine the amount of onsite contamination at this end area. 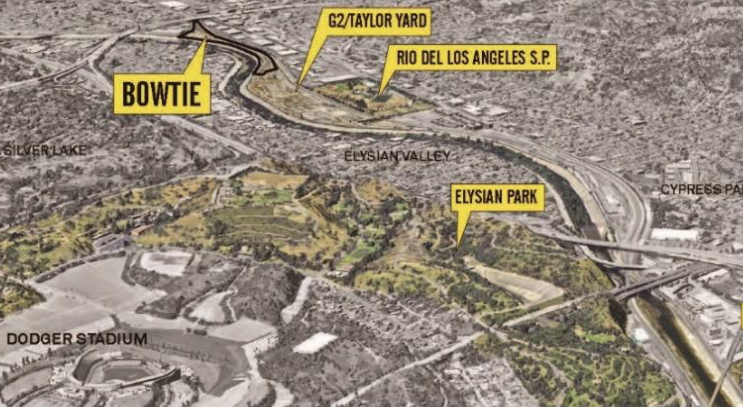 Photo above was part of The Nature Conservancy presentation at the Alliance of River Communities on 12/16/19.

According to envirostor.dtsc.ca.gov, Bowtie (Parcel G1) is part of the former Union Pacific Railroad (UPRR) site that operated from 1880s to late 1990s. It operated as a locomotive maintenance facility that included the track area for rail car switching, the filter press recycling area, above ground storage tanks area, and the wash rack. Operations ceased in 2003 and Parcel G1 is currently vacant.

Past uses that caused the contamination were above ground storage tanks, the railroad maintenance shop, and the railroad right of way. Investigations indicate that there are existing compounds at high level that require mitigation, according to envirostor.dtsc.ca.gov, Cleanup Status as of 8/16/2019. “Potential contaminants of concern are Arsenic, Benzene, Lead, Polynuclear Aromatic Hydrocarbons (PAHS), and TPH-Diesel,”

The unearthing of a Storm Drain would do nothing to remediate or mitigate the level of contaminants at the G1 Parcel. And, perhaps the digging of the Storm Drain would disturb the buried contaminated soil allowing this soil to run off onto the River, said a concerned resident.

There’s public perception of the possibility that there’s limited communication between the city, state, and county agencies of what’s taking place at Bowtie. With Bowtie’s abundance of recreational possibilities, people are beginning to the use the site before potential hazardous contaminants have been identified and are possibly putting participants at risk. “Why are adults and children holding events and campfires there?” asked a second resident.

DTSC oversight director for Taylor Yard G1 and G2 Parcels, Jessie Fierro recommended that access to G1 Parcel (Bowtie) should be stopped.  No one should be holding community events or access the site, particularly families with children until the risk assessment report for the entire parcel has been completed.

“There can’t be a standard made if we don’t know what type of land use there is,” said Ms. Fierro. Besides residential, commercial, and industrial, there are also standards for open space and other types of land use based on risk assessments. With all this come health risk assessments that will be created. “For G1, this is a very initial phase,” concluded Ms. Fierro, closing the presentation.

(Connie Acosta is a Board Member of the Echo Park NC and NC Budget Advocates and a CityWatch contributor.)