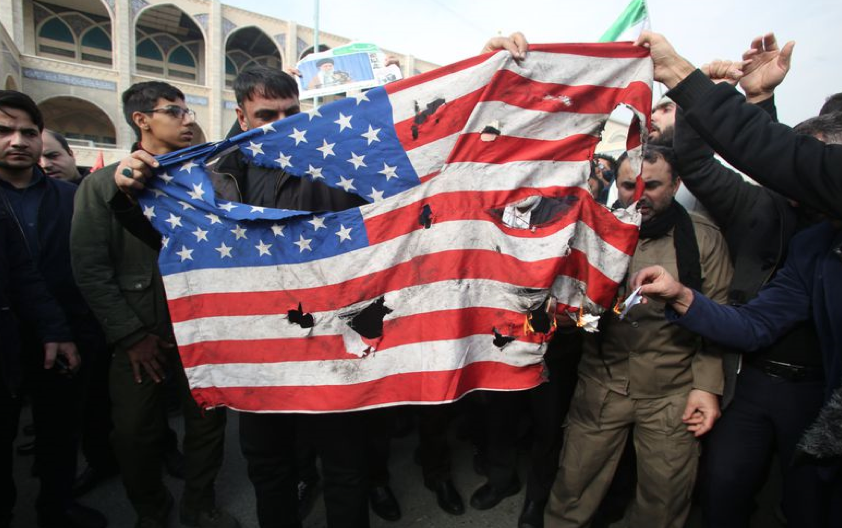 ALPERN AT LARGE-No one should be blamed for being concerned about killing Qassem Soleimani, the terrorist kingpin who killed had Syrian, Iraqi, Yemeni, Lebanese, and American blood on his hands, because now we're wondering where this will all end up.

A war? New terrorist actions? But he WAS an enemy, and he DID kill and maim hundreds to thousands of American troops.

So perhaps the biggest question isn't whether we should have taken him down, but rather why he wasn't taken out a long time ago.

Soleimani WAS an ongoing and well-known threat, as is the leadership of the nation of Iran--who arguably doesn't represent their people very well. Hence the need to separate the leadership from its people/citizens who are tired of poverty, crisis, and being in the middle of a maelstrom of war and zealotry. There's a reason why many Iranian immigrants call themselves Persians, not Iranians.

But for many of us who remember all that's gone on since the 1980's, when the Iranian Revolution occurred and sent a once-developing nation into a worldwide pariah (and the American hostage crisis), that same group of "those who remember history" are neither afraid of Iran nor recognize the need to have ANY war.

Iran has been granted a strange "hands off" status for decades and has gotten stronger while we've curiously--and inexcusably--allowed this leader of state-sponsored terrorism to get more and more of a threat. We didn't want to go to war, and then after 9/11, President George W. Bush went to war in Iraq and encouraged free elections in the Gaza Strip to allow Hamas control...all to Iran's benefit.

Then President Barack H. Obama took down Moammar Gaddafi, our once-enemy who pretty much surrendered to us after we took out Saddam Hussein, and Libya became a war-torn nightmare...and then allowed Iranian control to become stronger in both Lebanon and Syria. Add all the cash/money that Obama gave Iran, much of it going to terrorism, and the question goes out:

Geez, Presidents Bush and Obama, why were you being so "nice" to the nation whose religious zealot/leaders love to decry us at every turn and chant for our deaths?  And if you're such great friends of Israel, Bush and Obama, then why did you keep restraining Israel from taking on Iran before Iran got nukes while enabling the power of its terrorist enemies Hamas and Hezbollah?

Seriously...whether it's the White House or the State Department...whose side are you on? Both China and Russia have used North Korea and Iran to "stick it to us" both militarily and economically, so now that ISIS and al-Qaida are under control, what DO we DO about Iran?

Hence the frenzy over what to do now that Soleimani and other Iranian terrorist leaders have been slain. No one wants a war, but NO ONE should have ignored the deaths to American soldiers, or other Israeli or Arab individuals, caused by Soleimani.

And the shut-down of the Selective Service website may be due to either confusion or due to American youths ready to take on the world's most outspoken threat.

President Trump (and I realize that some of us CAN compartmentalize their feelings about the Orange Man in the White House, and others CANNOT, from the threat to the world Iran poses) appears to not want war, but prefers to bomb them from far away while choking them off economically.

Some will choose to be non-partisan about the need to say "enough is enough" with Iran. Others will not. But sooner or later, as with China, and with North Korea, our enemies/adversaries will be the only true beneficiaries from our divided nation.

No one has to like or even trust President Trump, but can we at least agree that Soleimani and Khameini, and all the "death to America" crowds, are worse?

Then we have the Rose McGowan's of the United States apologizing to Iran for us taking out a known slayer of hundreds (HUNDREDS, dammit!) of American troops, and our usual football-dropout-who-still-makes-millions-by-disrespecting-his-nation Kaepernick. Those stand to be the worst rogues of all, and need to be called out by all sides.

Sure, they're exercising their free speech, but there are those of us who remember history, and all the way back to Hanoi Jane and all those jonesing for the rise of Cuba and the Soviet Union until Reagan, Thatcher, and Pope John Paul II took them out. The rest of us have the right to free speech, too, and we can choose to stop lionizing them and paying them so damned much.

And if Hollywood wants to either keep their verbal defecation on the American people, they can, too, but they should also ponder why Ricky Gervais was so popular ripping these self-absorbed narcissists a new one.

Because Hollywood isn't full of Jimmy Stewart-types to drop their acting careers and risk their lives flying over Nazi Germany. If it's a choice between all the Hollywood and all the Kaepernick-types on one hand, versus our American troops on the other hand...

...it's probably going to go in favor of the troops.

It's time to consider whether we're the next generation of Americans who will or who will NOT allow the deaths of American troops to be minimalized. We SHOULD be concerned and do everything we can to bomb and/or economically starve (preferably the latter) our avowed enemies, and NOT go to war.

But our sworn enemies ARE our enemies, and they've not going away, nor are they soon to EVER go away unless they're confronted and dealt with. A mass murderer got justice.

And that's ALWAYS a good thing.

What’s Going on At the West Valley Animal Shelter—Will It Remain a City-Run Shelter?

Trump’s Plan to Steal the Election: Should I Really be Worried?