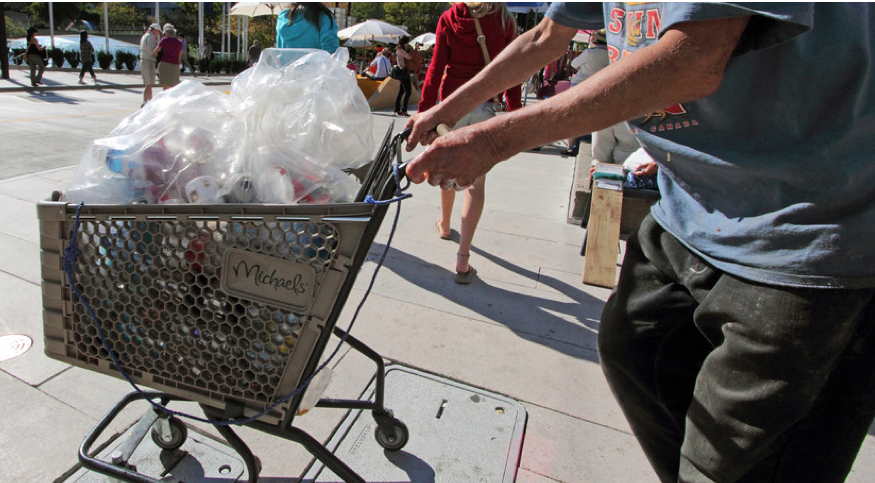 RANTZ & RAVEZ-It was early Sunday morning and I was at a drive-thru car wash in the West Valley wiping down my car.

I saw a shopping cart most likely stolen or permanently borrowed from a local market parked on the sidewalk, unattended and loaded with empty plastic bottles and a variety of other recyclable items. The “owner” of the cart was scavenging in the trash cans looking for recyclables.

A second scavenger on a bicycle loaded with recyclables happened upon the scene. The man stopped his bicycle and looked around. Not observing anyone around, the man rode off pulling the loaded shopping cart behind him. A few minutes later the “owner” of the shopping cart arrived to retrieve his cart that was now headed north on Topanga Canyon, being pulled by the bicycle rider. A lady at the car wash yelled at the man that his cart was headed north on Topanga Canyon. The man ran carrying his newly found recyclables. The “owner” of the shopping cart caught up to the “suspect” and the two engaged in a conversation. One then went north and the other south. The moral of the story: Never leave your property unattended no matter how much you think it’s worth.

Porch Pirates continue to strike in California and in particular Los Angeles.

Speaking of people walking off with your property, it has been reported that California has the worst porch pirates in America. SafeWise reports that 30% of stolen packages in the nation are being stolen in California. San Francisco tops the list with the most thefts. Los Angeles and Sacramento rank in the top ten.

If you are one of the residents that likes to have items delivered to your home by one of the national delivery services, you are a potential victim. Be aware and make sure someone is available to receive your package. Don’t be the next victim.

Here comes a RaveZ: CicLAvia is finally coming to the West San Fernando Valley for the first time.

Third District Los Angeles City Councilman Bob Blumenfield has been successful in arranging for CicLAvia to come to the West San Fernando Valley for the first time. This Sunday, December 8, residents of Los Angeles and surrounding communities are invited to walk, roll, dance and run along five miles of Sherman Way from Reseda to Canoga Park. Between 9 a.m. - 3 p.m., Sherman Way will be transformed into a car-free public park for the entire day. The specific area is Sherman Way from Lindley on the east, to Shoup on the west. The communities of Reseda, Winnetka and Canoga Park will all be involved in the event. For information 213 355 8500 or [email protected].

The reports from the city show that millions of tax dollars dedicated to cleaning up the trash at homeless camps are not working.

This should not be news to any of you who read my column. The homeless camps and their accumulated trash are getting worse. There is a lack of City coordination that clearly shows when we drive around. When will the Mayor, City Council and the millions of dollars earmarked to combat homelessness begin to have an impact on the situation? We will have to hope for improvement in 2020 because the holidays are approaching, and history shows that not much gets done in the city during the holiday season.