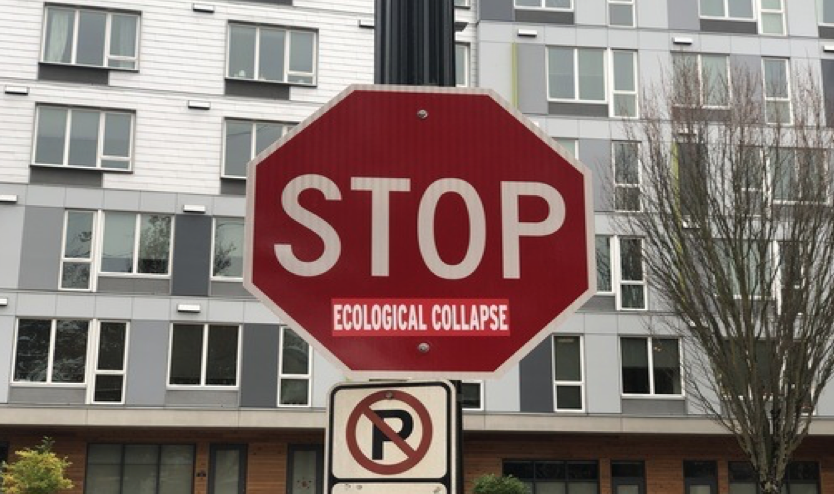 CLIMATE POLITICS-As the ecological crisis deepens, nearing the infamous Tipping Point – taking us closer to planetary catastrophe – we are being led to believe that an imminent “greening” of the world economy will deliver us from a very dark future.

Somehow, against all logic, we have adopted a collective faith in the willingness of ruling governments and corporations to do the right thing. Carbon footprints will be drastically reduced thanks to a combination of market stratagems and technological magic. While greenhouse mitigation seamlessly advances, the ruling forces can return to what they do best – indulge their religion of endless accumulation and growth.

That scenario, so widely embellished, turns out to be the saddest – and most crippling – of all grand illusions. Nowhere is its peculiar influence stronger than in that worst of all environmental culprits, the United States.

The overblown 2015 Paris Agreement was touted as the last great hope but is now better described as a well-intentioned exercise in futility, closer to James Hansen’s dismissive “fraud with no action, just promises”. At Paris the 200 members settled on a 20/20/20 formula: reduce carbon emissions by 20 percent, increase renewable energy sources to 20 percent of the total, elevate overall energy efficiency by 20 percent. That would theoretically keep global average temperatures at less than two degrees Celsius (ideally 1.5 degrees) above pre-industrial levels.

The problem is that all targets are voluntary, with no binding mechanisms. Under Paris each nation (currently 187 signatories) determines its own plans, sets its own outcomes, and reports on its carbon-mitigation efforts. In fact, no members have yet moved forward to implement goals thought to be consistent with the 20/20/20 prescription – and most are woefully short. While President Trump has withdrawn the U.S. from the Paris arrangements, its added carbon footprint turns out to be no worse and indeed better than other major emitters – China, India, Russia, Japan, Germany, Canada, Mexico.

Despite greater reliance on sustainable energy in many nations, heightened overall economic growth has meant higher global carbon emissions of 1.6 percent in 2017 and 2.7 percent in 2018, with anticipated sharper increases for 2019. The fossil economy moves fullspeed ahead: oil and gas extractions have reached all-time highs, with no slowdowns expected. Even as renewables significantly climb upward, as in China, India, the U.S., and Europe, we see a steadily rising carbon footprint because of total increases in economic growth and energy consumption. The top 10 countries presently account for 67 percent of all greenhouse emissions, with little change in sight.

Recently the United Nations Environmental Program, hardly a radical source, projected that by 2030 global production of fossil fuels will more than double what can be consumed to reverse further global warming. In other words, the Paris accords are essentially null and void. The UNEP report, extrapolating from emissions data among eight leading national emitters, concludes that “humanity” is moving along a suicidal path to ecological oblivion marked by temperature increases of four degrees Celsius, perhaps worse.

Even if the 20/20/20 targets were faithfully met by all leading nations, however, little would change. In fact the sum of all pledges at Paris would not keep temperatures from rising two degrees (even more) in coming decades. Overall fossil-fuel consumption dictated by soaring growth levels easily cancels such efforts, so that existing carbon-mitigation strategies turn out to be illusory. In fact, many keen observers believe it is already too late, that burdened by a legacy of political failure we are headed straight toward planetary disaster. Waves of militant climate protests across the world speak to mounting public anger, yet these protests (and others before them) have yet to generate the kind of cohesive political opposition that could reverse the crisis. We appear trapped in a cycle of futility, a kind of psychological immobility that David Wallace-Wells, in Uninhabitable World, refers to as “climate nihilism”. Mass protests in such a milieu are not readily translated into anti-system change – or even far-reaching reforms like those associated with the various Green New Deals.

According to writers like Wallace-Wells, we are trapped in a world moving inexorably toward an additional four or five degree Celsius by the end of the century, if not sooner. He concludes: “. . . if the next 30 years of industrial activity trace the same arc upward as the last 30 years have, whole regions will become unlivable by any standard we have today.” Ecological cataclysm will befall large sections of Europe, North America, and South America. In this setting the world economy would be reduced to shambles, making Karl Marx’s famous crisis theory appear rather tepid. Wallace-Wells adds:

“Warming by three degrees Celsius would unleash suffering beyond anything that humans have ever experienced through many millennia of strains and strife and all-out war.”

Along with “industrial activity” Wallace-Wells could have mentioned the even more problematic realm of agriculture and food: that will be the weakest link in a crisis-ridden system. Presently up to 80 percent of all fresh water goes to farming – half of that total utilized for meat production. We live in a world where it takes 2400 gallons of water to produce one pound of beef and 685 gallons for one gallon of milk, compared to just a few gallons for equivalent amounts of grains and vegetables. Half of all arable land goes to corrosive animal grazing, with no decline expected as more nations reach industrialized status. Taking fossil-fuel use into account, the carbon footprint of meat-based agriculture could be 30 percent of the total, even more. Since more than two billion people are now deprived of adequate food and water, the severe unsustainability of capitalist agribusiness and fast-food industry should need little elaboration.

Amid fashionable pleas to “save the planet” and recent surge in “climate activism”, few countries have embraced a program of serious carbon mitigation. For government and corporate elites, it is continued business-as-usual. Writing in Climate Leviathan, British Marxists Geoff Mann and Jonathan Wainwright lament: “The possibility of rapid global carbon mitigation as climate-change abatement has passed. The world’s elites, at least, appear to have abandoned it – if they ever took it seriously.”

Instead, the real plan going forward is one of adaptation to a continuously heating planet.

The same corporate behemoths that dominate the world economy also shape decisions impacting the ecological future. At present, according to Peter Phillips in Giants, 389 major transnational corporations manage a world system worth an estimated $255 trillion, much of that invested in a boundless trove of fossil fuels. The U.S. and Europe hold nearly two-thirds of that total. No more than 100 of these corporations are currently responsible for at least 70 percent of all greenhouse emissions. At the top of this pyramid 17 financial giants drive the world capitalist economy. To date there are no signs that the chieftains of fossil capitalism are ready to deviate from their historically destructive course.

In the U.S. nowadays, there is much inflated talk among Big Tech elites of slashing the carbon footprint, a move obviously beneficial to the corporate image. Managers at Google, Microsoft, Amazon, and Facebook seem anxious to launch their own greening crusades. They ritually tout green technology as the preferred route to carbon mitigation. Jeff Bezos claims Amazon will derive 100 percent of its energy from alternative sources by 2030. Other tech oligarchs, in command of a dynamic technological universe, seem to be promising a carbon-free economy – at least partly in response to mounting worker protests.

Another fine illusion: Big Tech and Big Oil have in fact decided to march forward in tight partnership, much to the advantage of those supposedly harmful fossil-fuel interests. The idea of “greening” apparently does not extend to moves by Google, Microsoft, Amazon, and others to profit from assisting those giants (Shell, ExxonMobil, Chevron, BP, etc.) to locate better, cheaper, and more efficient drilling and fracking locations. Big Tech can furnish precisely what is most needed: lucrative cloud facilities, AI, robotics, troves of geological and meteorological data. This has been especially helpful in exploiting the mass shale oil boom in Canada and the U.S. Referring to ExxonMobil in particular, Bezos has said that “we need to help them instead of vilifying them.” That could mean an extra 50,000 barrels of shale oil daily for just one climate-destroying enterprise.

While business at Google, Microsoft, and Amazon is doing just fine, worker discontent flows through the hardly-dispossessed ranks – protests and walkouts directed not only at all the climate hypocrisy but at the spread of other “partnerships” with law enforcement, border-security agencies, intelligence operations, and of course the Pentagon. Another Big Tech scheme – to capture and sequester carbon emissions, or CCS – is widely viewed as another fantasy, highly problematic both technically and economically.

The stubborn reality is that, by 2040, the world will be consuming fully one-third more energy than is presently the case – probably 85 percent of that from oil, gas, and coal. Many trillions of dollars in fossil fuels remain to be exploited. Corporate logic dictates that such unbelievable sources of wealth be extracted to the maximum, whatever “greening” targets might be set at Paris and later environmental summits.

Meanwhile, reputable economic projections indicate that China will have a world-leading GDP of $50 trillion by 2040, followed by the U.S. at $34 trillion and India at $28 trillion. Those nations will presumably command more wealth than the rest of the world combined. More daunting, the leading two countries will possess more wealth – and control more resources – than the total of what exists on the planet today. What could this frightening scenario mean for energy consumption? For climate disruption? For social misery? For agriculture and food shortages? For resource wars and the militarism that figures to be both cause and effect of such wars? Could Paris and its succeeding international accords – or any Green New Deal – make a meaningful difference on such a wildly unsustainable planet?

As the crisis worsens, with few if any strong counter forces on the horizon, what we desperately need is an entirely new political imaginary – one that finally sets the world free of transnational corporate domination.

The title of this article comes from the seminal 1937 Jean Revoir film Grand Illusion, in that case focused on the ideological mirage of warfare.

Carl Boggs is the author of several recent books, including Fascism Old and New (2018), Origins of the Warfare State (2016), and Drugs, Power, and Politics (2015). He can be reached at [email protected] This piece appeared in CounterPunch.org.)  Prepped for CityWatch by Linda Abrams.