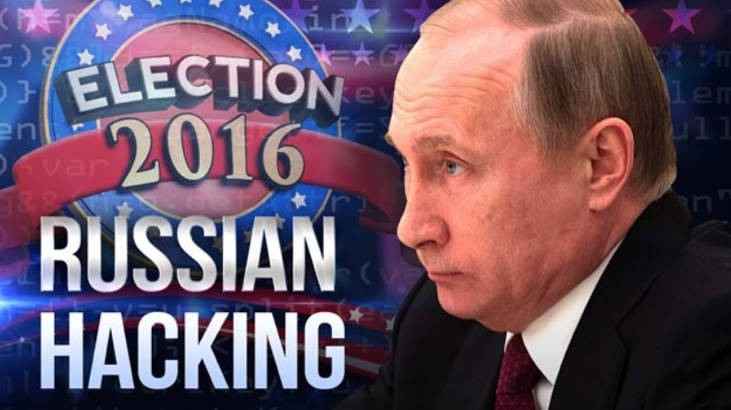 ONE MAN’S OPINION-Answer: Nothing. America has devolved into such a morass of fake news, lies, deception and corrupt gobbledygook that we cannot reason our way out of a paper bag.

It is Putin’s job to meddle in U.S. elections the same way we have meddled in the elections of other countries. We do not need the CIA, FBI or other intelligence services to tell us that Russia meddled.  That falls into the dog bites man category.

If the Russian meddling brings to the attention of the American people information which is truthful and accurate, how is that a bad thing?  As far as I have heard, the emails, which Russia allegedly gave to Wikileaks, were actual emails which were politically relevant to the election.

Russia is accused of stirring up animosities between different groups in the US. If the Dems and the GOP had not laid the groundwork for Group Rights hatreds among Americans, Russia could not have taken advantage of America’s internal bigotries. Russia did not create either White Supremacy or Pelosi’s Identity Politics.

What Is Wrong with Trump’s Soliciting Ukrainian Help for His Own Personal Benefit?

Trump’s job is to protect America – not to advance his own personal interests or the interests of Vladimir Putin. Trump’s extortion scheme to have Ukrainian President Zelensky announce an investigation into Joe and Hunter Biden was not Trump’s only act of treason. His allowing Turkey and Russia to rush into Syria and murder the Kurds did not turn into the genocide which Erdogan wanted because the US military went bonkers. Nonetheless, Trump traded US national interest for some personal benefit, which has yet to be disclosed. There is no gainsaying that Russia and Iran were the true beneficiaries of Trump’s kowtowing to Erdogan, and America was the loser – perhaps forever due to our betraying an ally.

The Ukraine debacle, however, does have a more treasonous aspect over and above Trump’s trying to extort Zelensky to announce an investigation into the Bidens. Trump was threatening to assist Russia in its war against the Ukraine in the Donbass region.  Both the US military aid and Zelensky’s need for a White House visit would have bolstered Ukraine’s war effort against Russia. Withholding either weakened America. Anyone who thinks that Zelensky’s saying that he did not feel pressured by Trump was not also the product of extortion still believes in Santa Claus.

Presidential Impeachment Is Legal and Political

Since the impeachment process is both legal and political, violating a law does not rise to the level of an impeachable offence until it makes the President’s remaining in office politically unacceptable.  The core evil of Trump Ukrainian gambit is two-fold: (1) He traded U.S. national interest for personal benefit, and (2) He corrupted virtually the entire foreign service apparatus from the Secretary of State down. When the public grasps this fact, Trump ceases to be politically viable.

The political process takes time. Nixon hearings began May 9, 1974 and he resigned on August 9, 1974, three months later. The first hearings in Trump were October 11. Three months would be January 11, 2020.

Trump’s actual wall of protection is not along the southern border to protect us from immigrant children. Rather, Nancy Pelosi is Trump’s Wall against Impeachment. As previously recounted in these pages, Pelosi is implacably opposed to Trump’s removal from office no matter how gargantuan his treasonable conduct. Her power is based on fund raising and Trump’s horrible behavior is her greatest fundraising tool. If the GOP should turn on Trump and have him removed from office during the impeachment process in the House, the entire dynamic of the 2020 elections will turn in favor of the GOP.  When the GOP ceases to support Trump during the House evidence gathering phase, each GOP member gets to explain in great detail how Trump betrayed America. The cumulative impact of those individual GOP declarations will move us away from civil war.

Like the Walls of Jericho, Pelosi’s Wall of Defense is Tumbling Down

On Monday afternoon November 25, 2019 while this article was being drafted, the United States District Court for Washington DC ruled that former White House Counsel Donald F. McGahn may not ignore the Congressional subpoena and he must testify despite the President’s objection. The ruling destroys Pelosi’s claim that evidence gathering must cease as reissuing subpoenas to the Fat Ladies would consume too much time. Legally, the White House may appeal, but politically that would be extremely harmful to the Party. It would be the equivalent to Trump’s invoking the 5th Amendment. It might temporarily protect him from legal jeopardy, but not the political consequences.

Unless Adam Schiff bucks Pelosi so that evidence gathering resumes until the GOP remove Trump through the political process of impeachment, in 2020 Trump will declare his election loss to be a fraud and bring a violent civil war upon the nation. The GOP cannot back away from Trump with the present level of evidence which is why Pelosi is calling a halt to the evidence gathering. Dems should remember that Nancy Pelosi was a prime cause of the 2010 Congressional shellacking. This time, Pelosi along with The Donald threaten the Republic itself.