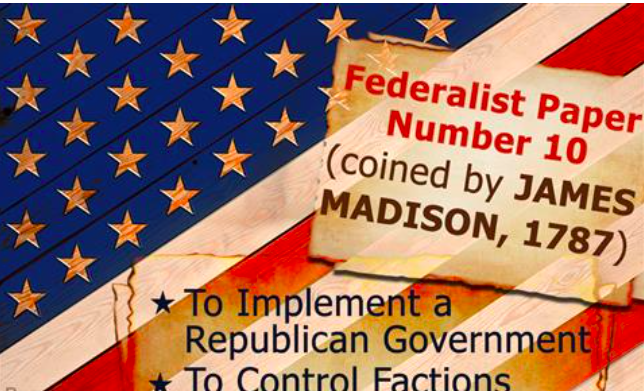 ONE MAN’S OPINION-The main danger to the inalienable right of liberty on which the nation was founded is the concept that Might Makes Right.

In the late 1770s and 1780s when men were educated and took the time to think about protecting liberty, James Madison wrote in Federalist Paper # 10:

“Complaints are everywhere heard from our most considerate and virtuous citizens, equally the friends of public and private faith, and of public and personal liberty, that our governments are too unstable, that the public good is disregarded in the conflicts of rival parties, and that measures are too often decided, not according to the rules of justice and the rights of the minor party, but by the superior force of an interested and overbearing majority.”

Americans Abandoned Liberty and the Republic Decades Ago

Americans were always nervous about liberty as it required constant vigilance against the powerful who would ignore the law in order to impose their will on others. As de Tocqueville pointed out in the 1830s, the blessings of liberty are ofttimes hard to see in the short term, while the lure of Equality (Group Rights) is strong. The appeal of Group Rights is simple – join this group and you gain the power to take what you want.

A nation based on individual inalienable rights leaves the individual with only the rule of law as his or her protector from predators. As Madison and other Founding Fathers knew, moral character and religious beliefs always lost out to the powerful. Rather, the inalienable rights could be protected only by balancing power with power. Hence, the Republic.

It was believed that the balance of power in a Republican form of government would protect individual inalienable rights including Life, Liberty and the Pursuit of Happiness. As Madison noted, there would be challenges by powerful factions to seize control, but the various balances of power between the different branches of government and between the state governments and the central government (whom we now call the Feds) would put us back on track. For well over 200 years, the Republic has succeeded.

The Death Threat to A Republic – A Passion Seizes the Majority

Madison foresaw the greatest threat when he wrote, “the existence of the same passion. . .in a majority at the same time must be prevented [or the majority must be prevented from] carrying into effect schemes of oppression.” -- Federalist Paper #10. Madison’s error was believing that the Republic would prevent a passion, which was opposed to individual inalienable rights, from becoming the passion of the majority.

Group Rights, which march under the banners of White Supremacy and Equality, infect a majority of the nation. The GOP will literally fight to the death for the right of white Europeans to control the nation, while the Dems promise to take revenge on all whites as soon as the minorities gain enough voters. Neither group gives a tinker’s damn about the individual and his or her inalienable rights. Both the GOP and Dems are infused with the same consuming passion for Group Rights – that privileges and liabilities be meted out according to the group to which one belongs.

The real danger in Group Rights is not the benign idea that various religions and ethnic groups should be proud of their traditions and work at constant self-improvement. Group Rights always turns to blaming someone else. Their focus becomes eradication of that threat. Trump and Nancy Pelosi are the greatest advocates of this aspect of Group Rights.

Trump has gotten millions of whites to believe the absurd notion that Mexicans were the cause of all their misfortune and to construct a wall from one end of the country to the other. Then, everything would be fine and dandy and everyone would have plenty of candy. Trump can switch which out-group is the threat in a second -- Mexicans, illegals, Muslims, ISIS, etc. When Trump learned that “globalists” and “internationalists” were code word for “Jews” and included his daughter and grandchildren, he stopped using those words.

Nancy Pelosi’s Group Rights philosophy casts a wide net. All whites – not just traditional whites like people from Northern Europe – but all people with light hued skin tone have become the evildoers. By virtue of their skin color, so the theory goes, they have reaped benefits to which they are not entitled. Thus, wealth must be re-distributed from the light-skinned people to others. No sooner did Trump drop Jews from his list of bad actors than did Nancy Pelosi make anti-Semitism a new touchstone of the Dem litmus test for legitimacy. No presidential candidate has defied her.

Will Trump’s Mental Illness Save the Republic?

Group Rights, left unchecked, always results in violence, thereby holding out the prospect of a violent civil war. Without any Mason-Dixon Line, the nation will be beset by constant guerrilla type urban warfare so that anywhere we go, we are subject to being shot dead. Our savior may be that Trump’s Histrionic Personality Disorder results in such outrageous behavior that enough of the rank and file GOP will force the craven cowards in the GOP leadership to break with Trump so that impeachment becomes overwhelmingly bipartisan.

The main force which holds the GOP together is Nancy Pelosi’s existential threat to whites that as soon as the Dems gain enough power, the minorities will take revenge. The last thing Pelosi wants is for Trump to leave office in time for VP Mike Pence to run for the Presidency. Any indication that the GOP is abandoning Trump will immediately be met with Pelosi’s unleashing more of AOC’s white entitlement claims and the general white bashing.

By the time this article appears, the Dems will have had another debate on Wednesday, November 20, 2019. Let’s see how many Democrat candidates explicitly rejected Group Rights and spoke in favor individual inalienable rights like liberty for everyone including whites.