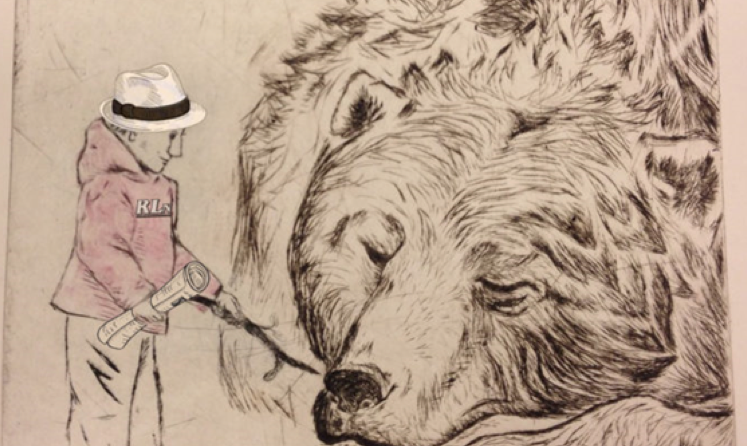 AT LENGTH-I was at the Little Italy fandango put on by Councilman Joe Buscaino when one of our newest civic leaders engaged me in some repartee about my latest article on the Bukowski bronze.

“You know James,” he said. “You just keep poking the bear.” It’s an accusation I’ve heard before and thought to myself, “Well if you don’t like getting poked, quit acting like a bear.”

However, being labeled as a “bear poker” isn’t the worst thing I’ve been called in my career. I’ve heard many slanders and threats from those who can’t put up an intelligent defense because they don’t think, they just react.

However, contrary to what some may think, “poking the bear” isn’t about getting your jollies infuriating a bear, it’s about making a point that they or others want to ignore. From the other perspective of speaking truth to power, which is often considered irreverent or disrespectful, much can come from asking the impertinent question. I’ll give you three cases in point.

Early one morning back in the 1980s. Lt. Gen. Forrest S. McCartney showed up at the San Pedro Chamber of Commerce’s Economic Development committee to show off his design plans for Air Force housing out at the former Nike missile base on Paseo Del Mar at White Point.  He came dressed in full military attire with a chest full of very impressive ribbons and medals, brass stars on his collar and an entourage of officers behind him.

He was given the full respect of his position as he walked the committee through his plans to build lots of military houses on this last piece of 102 acres of coastal sage scrub habitat in coastal San Pedro.

“This is going to be good for San Pedro,” he boasted, and then went on to explain that his plan would give the community a 15 foot “green space” surrounding the otherwise gated compound.

There was a kind of hushed silence and an awkward moment of astonishment at the audacity of this plan, but no one wanted to embarrass the general. No one wanted to speak except me.

“So you’re telling this committee that out of the 102 acres of land you’re giving the community a 15-foot green belt around a gated compound?” I asked somewhat innocently.

“You realize that you are talking to a room full of business people here who know that a good deal is one in which everyone walks away from the table feeling like they’ve got something of real value,” I said. I paused then said, “This isn’t that.”

There was a kind of stunned silence before Gen. McCartney exploded back at the impertinence of anyone questioning his plan. His face reddened and he shot back, “You lying son of a bitch.” His officers all looked sideways and he stormed out of the conference room. That was the beginning of the end for his project.

Clearly, he wasn’t used to this kind of insubordination. However, later with the help of a retired LA City Park ranger, Ken Malloy, a series of articles and the help of then Councilwoman Joan Milke-Flores, White Point and Angels Gate Park were both transferred from the federal government to local control. My bear poking comment started a whole string of events that ended up with a huge win for the community.

And so, Angels Gate Park was born at the same time with the creation of a cultural center as part of the deed transfer to the City of Los Angeles. The city’s Recreation and Parks Department came in to manage the new park, with LA Unified School District getting control of almost half the site for a future school (now the Olguin campus).

In the years following, Recreation and Parks set up Park Advisory boards to give “stakeholders” some sense of ownership of their neighborhood parks.

At one point I was informed that these Park Advisory Board meetings were being held at the park and were “invitation only” with no public notices or agendas. I show up anyway, knowing that this meeting violated the California open meetings law known as the Ralph M. Brown Act.

At first, there was some surprise that I was there at all. The attendees and park director were cordial until the actual meeting started. Then they attempted to “excuse me” from the meeting, then insisted that I leave and then finally brought in the park ranger to have me forcibly removed under threat of arrest.

My response to the ranger was, “You probably know more about the open container laws in public parks than you do about the open meetings laws in the state of California.”  My point was that if he were to arrest me for trespassing at a public meeting in a public facility, things wouldn’t turn out well for either him or the park director. They abruptly canceled the meeting and I later wrote a column about this and sent a letter to the president of the Recreation and Parks Commission and cc’d the letter to Mayor James Hahn.

Some years later, I learned via Hahn’s then-wife that because of this incident the directors of more than 100 city parks were ordered to attend mandatory training at the New Otani Hotel in downtown Los Angeles on compliance with the open meetings law. Gradually, the entire city became aware of the Ralph M. Brown Act and started to comply.

Back in 2001, some readers will recall that a coalition of community and environmental groups filed a lawsuit in Los Angeles Superior Court challenging the plans by a Chinese shipping firm, China Shipping, to build a 110-acre terminal at the Port of Los Angeles. The project was approved by the Los Angeles City Council without adequate environmental reviews, despite its potentially adverse impacts on health in nearby communities already suffering one of the highest concentrations of diesel emissions in the region.

Well, this critical incident began with the then-POLA deputy director inviting a few of us to sit down and talk about the future of Knoll Hill over Busy Bee sandwiches. My response was that it was going to take more than a few sandwiches to buy off the community on what the port had planned for this new terminal. And indeed, after a long court battle, the Natural Resource Defense Council and the community activists prevailed with a $65 million judgment to mitigate the impacts.

This was a game-changing event that stunned the port into rethinking its environmental policies and its relationship to the community that started two decades of reforms. I am honored that our reporters had something to do with covering this and giving voice to the community who had the nerve to poke the bear. Yet, this story isn’t quite over.

Just last month POLA had to issue a supplemental environmental impact report. What is curious is how this supplemental EIR came into being. Once again in a room full of community leaders on the 5th floor of the Port of Los Angeles’ administration building, the director of environmental affairs, Chris Cannon, was giving a report. I asked one simple, poking question, “Has anyone done an audit of the China Shipping mitigation funds?”

“Of course we have,” Cannon answered. But what hadn’t been done and what he didn’t admit was an audit of the compliance measures that were stipulated in the 2001 court order. Many months later, the slightly embarrassed Port of Los Angeles released the China Shipping audit report admitting that the terminal operators and the port were not in compliance and had not implemented 11 of the mitigation measures promised in the 2008 EIR and had granted secret waivers to China Shipping from complying with the 2004 settlement order. This was the issue the Harbor Commission board tried to rectify recently without rectifying the lack of compliance for the prior 10 years. The NRDC objected to the port’s sleight of hand and threatened to take the port back to court.

These are just a few examples of bear poking that stand out in my mind for all of you who have either forgotten or who wonder why some journalists ask what often appear to be impertinent questions. It’s because there are some real benefits to poking a bear that needs a little prodding to cough up the truth.

(James Preston Allen is the founding publisher of Random Lengths News. [[[  https://www.randomlengthsnews.com/2019/11/07/poking-the-bear-and-what-comes-of-it/ ]]]  He has been involved in the Los Angeles Harbor Area community for more than 40 years.) Prepped for CityWatch by Linda Abrams.