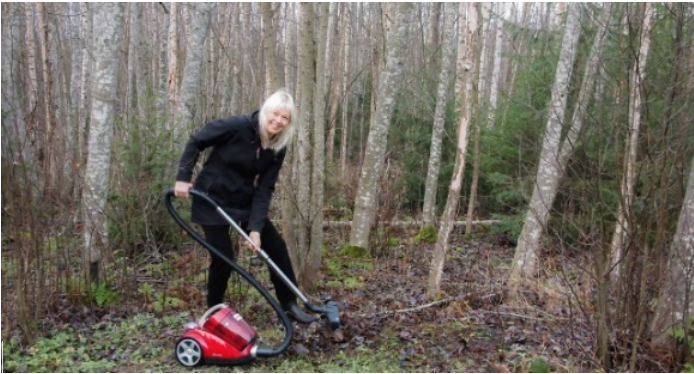 GUEST WORDS--God bless the Finns. They've been there for us after the Idiot-In-Chief visited a ravaged California - the  death count is now 76, with 1,300 feared dead - stood awkwardly in the rubble of what was once Paradise, which he called "Pleasure," and spewed gibberish.

Because many, many people say he knows the best words about how to stop fires, he intoned, "You gotta take care of the floors. You know the floors of the forest, very important..." He somberly went on, "I was with the president of Finland and he said, ‘We have a much different - we’re a forest nation.’ He called it a forest nation, and they spent a lot of time on raking and cleaning and doing things. And they don’t have any problem. And when they do, it’s a very small problem, and when it is ... I know everyone is looking at that.”

Everyone was also looking at the trying-really-really-hard-not-to-snicker-or-punch-some faces of Gov.- elect Gavin Newsom (who has called Trump "a joke and a racist") and outgoing governor Jerry Brown (who called Trump's fire-related comments "inane and un-informed") as they stood with him. People were also pretty busy on Twitter making Rake News and Rakes of Wrath and Rake America Great jokes - "Do I need voter ID to buy a rake for my forest floor?" "Rake against the machine," "Fire hot. Hurricanes wet. Hair real. Rake more," "I'll take things that didn't happen for 300, Alex" - while trying to explain that California is not Finland: "Finland - VERY COLD. VERY WET. Fire not like very cold very wet. Make fire small and sad. California - VERY HOT. VERY DRY. Fire love very hot very dry. Make fire bigly and happy."

In Finland, meanwhile, their president said he'd told Trump that Finland "takes care of our forests" but he has no friggin' idea why little Donny thought he'd talked about raking. Regular Finns likewise took to Twitter to explain they don't rake their forests.

They also boasted they don't elect "racist morons" to their country's highest elected office, complained that while they love Finland they don't like the required military service of six months raking, suggested patenting a "Forest Roomba," and posted photos of dutiful rakers, ranging from synchronized raking troupes to children "raking" in blizzards to a woman happily vacuuming the forest floor: "Just an ordinary day in the Finnish forest."

Perhaps the crowning touch to the California debacle came as Trump left the scene of the crime. Asked by reporters if what he'd witnessed had changed his fatuous, obstinate, la-la-la-I'm-not-listening-to-anything-I-don't-like "mind" about climate change, he said, "No, no, I have very strong opinions on that. I want great climate."

Yeah, we do too. But first we want a president who's at least minimally coherent, occasionally morally accountable, and not barking mad.

(Abby Zimet writes for Common Dreams … where this piece originated.)