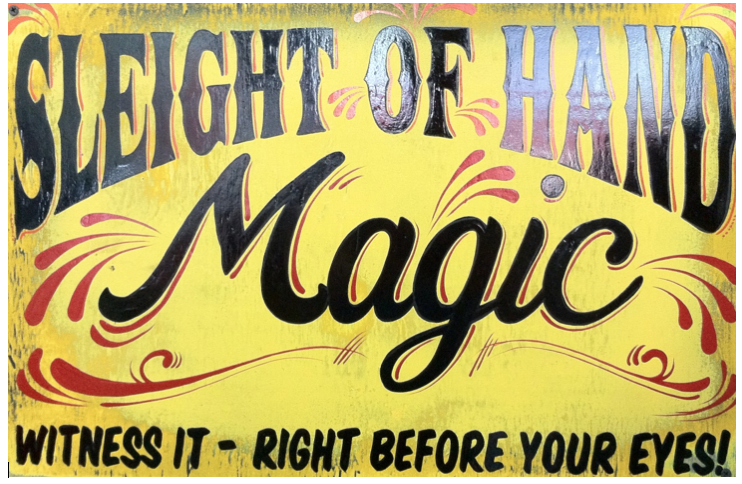 SUSPICIOUS CHANGES-The people at City Hall are masters when it comes to sleight of hand.

On October 15, the Department of City Planning (DCP) posted an update on its re:code web site saying that the City Planning Commission had approved the Processes & Procedures Ordinance.

On October 26, the DCP posted a revised version of the Ordinance, now titled Reorganization of Administrative Provisions, on the City's Council File Management System (CFMS). The original version disappeared from the CFMS. This was apparently done with no notice to the public, including Neighborhood Councils. (The full name of the Ordinance is "Zoning Code / Los Angeles Municipal Code (LAMC) / Reorganization of Administrative Provisions / Amendment, Council File No. 12-0460-S4 ")

I didn't catch the change. They put that one right past me.

When you write non-fiction for publication, there's nothing worse than having somebody say you need to print a correction. But that's exactly what happened to me last week. I wrote an article for CityWatch about the proposed Processes & Procedures Ordinance, warning readers that it was basically an attempt by City Planning to usurp the City Council's planning authority. Not long after it was published, I was contacted by a friend, Hydee Feldstein. She told me the article was inaccurate and I needed to publish a correction quickly.

I was stunned. And baffled. I'd spent a lot of time proofing the article. I worked from the staff report posted on the re:code website just after the City Planning Commission recommended approval in mid-October. What had I done wrong?

When I spoke to Hydee she explained that the original document had been revised, renamed, and given a new council file number. Interesting twist. That explains why when I searched for Processes & Procedures on the CFMS nothing came up. I thought it was a glitch in the system and went to City Planning's re:code website where I knew they'd posted the Ordinance after the CPC approved it. That was the document I worked from and, as of November 13, it's still the only version of the document posted on the City's re:code website, even though the revision appeared on CFMS over two weeks ago.

Maybe because the City decided Processes & Procedures was drawing too much attention. City staffers claimed repeatedly that it was just an administrative update, with little impact on how decisions would be made. But a lot of people who looked at the Ordinance saw it as a power grab by City Planning, intended to restrict public involvement in the planning process.

Can we trust folks at the DCP?

In my article last week, I focused on the paragraph in Processes & Procedures that said the City Council's authority was pre-empted by the zoning code. At the City Planning Commission hearing in October, Hydee had singled that paragraph out, saying the DCP was trying to usurp the Council's authority. I repeated her argument in my piece for CityWatch and called for the language to be removed. So, the article gets published, and Hydee tells me I need to print a correction because the paragraph had already been taken out. That’s when she alerted me to the revised and renamed version of the Ordinance. I asked her if the revisions had solved the problems. She said absolutely not.

The City didn’t really remove the problematic language. They just buried it deeper in the document. They changed the name, but the Ordinance is still a power grab. It still reduces notification requirements. It still restricts opportunities for appeals. It still gives the Director of Planning new authority without preserving the City Council's role as the ultimate decision-maker or preserving the Charter-required role of our Neighborhood Councils and residents in the planning and approval process.

And maybe most troubling, the Ordinance also gives new powers to the Mayor. Section 13.1.2 says that the Mayor will "Exercise any other authority delegated by the Municipal Code, City Charter, or State law." Pay close attention to those last two words. Actually, the State has no power to give the Mayor any additional authority. The State can pass laws, and the City must comply with them, but the State can't shift legislative authority or tell us who within the City can speak for us as a City.

LA's Charter gives all legislative authority to the City Council. The insertion of these two words should be a flashing red light for anyone who believes our local elected officials should have the final say on what gets built in LA. Over the past few years the State Legislature has been working hard to increase its power over local planning. The insertion of these new authorities for the Mayor, and specifically the inclusion of the words "State law," appears to be a sign that folks from Sacramento have been involved in writing this new ordinance.

Should you be worried about this? Only if you care about what gets built in your community.

The DCP keeps telling us they've been completely open and honest about this process, sending out all required notifications and engaging with the public every step of the way. So then why did they revise this Ordinance, rename it, and change the council file number just about two weeks after it was approved by the City Planning Commission? Why did they fail to notify the public about these changes? Why hasn't the revised Ordinance been posted on the re:code web site? The only version available there is the original version contained in the staff report.

Is the DCP really trying to keep the public in the loop? Or are they using sleight of hand to quietly pull a switch so they can move the Ordinance forward without attracting any more attention?

It gets even more disturbing when you think about the next step in the process. The DCP has now sent the revised Ordinance to the Planning & Land Use Management Committee (PLUM). Can we expect the PLUM to vet this document thoroughly and protect our right to due process? To answer that question, let me remind you that the home and offices of the Committee’s Chair, Councilmember Jose Huizar, were raided by the FBI earlier this month. On top of that, two of Huizar’s former staffers have filed law suits against him, one of them alleging that the Councilmember instructed her to alter his appointment calendar to avoid revealing his meetings with developers and lobbyists.

This Ordinance, whatever it’s called, is still a power grab. Don't buy City Planning's line that this is just a boring procedural Ordinance that will have no impact on your community. If City Planning was really interested in openness and transparency, why did they revise the Ordinance, change the name, change the council file number, and forward it to PLUM without informing NCs or posting an update on the re:code web site?

This is urgent. City Planning claims that it won't go on PLUM's agenda until January or February, but the fact that they used this stealth move to push it forward makes it seem unlikely they'll wait that long. If we're going to stop this, you need to do two things TODAY:

Call your Councilmember today to insist on a meeting. Then tell them that PLUM needs to send this back to City Planning and insist that no further action be taken until the most recent version has been sent to Neighborhood Councils. The NCs need time to study the document and consider whether this Ordinance is really in the best interests of LA's communities.

If PLUM doesn't send this back to City Planning to allow more time for review, then we must assume they're going to vote on it soon. Write an e-mail to the Committee members to tell them you strongly oppose this power grab. Please use the following subject line:

Send your message to the PLUM Committee members and copy both the PLUM Clerk and the City Clerk.

This is urgent. This Ordinance is the first step in City Planning's implementation of re:code, which is looking more and more like a thinly veiled attempt to hand Los Angeles over to developers. If you value your community, and if you feel you have a right to be heard in making decisions about new development, please act today. Don't let unelected bureaucrats whose motto is "Build, Baby, Build" take your city away from you.

(Casey Maddren is President of United Neighborhoods for Los Angeles (UN4LA [www.un4la.com]), a grass roots group advocating for better planning and a CityWatch contributor.) Prepped for CityWatch by Linda Abrams.