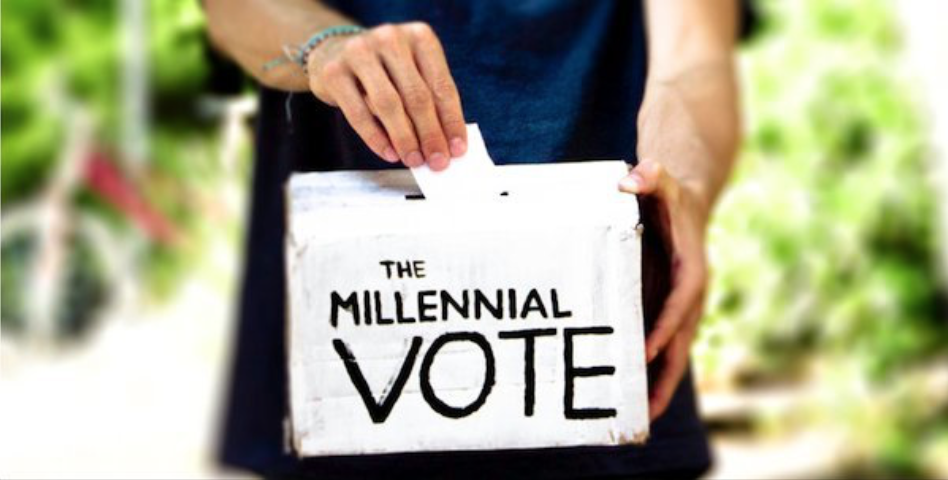 BCK FILE--Millennials, together with Gen X voters, are poised to take over Baby Boomers as a powerful voting bloc.

According to the Pew Research Center, Millennials and Gen X voters cast 69.6 million votes while the percentages of votes by Baby Boomers and older generations hovered under 50 percent.

So, as we count the ballots in the midterms, all eyes are upon the younger voters. But will they show up?

In 1971, the 26th Amendment was ratified, providing “The rights of the citizens of the United States, who are 18 years of age or older, to vote, shall not be denied or abridged by the United States or any state on account of age.”

The 26th Amendment was ratified during times when young Americans rallied for social change. The strive to lower the voting age had been a long road, starting during World War II and winding its way through the Vietnam War.

A year following the ratification, voter turnout had hit 55.4% but has declined since. There was a slight increase of 18-24-year-olds voting in the 1992 presidential election, but younger voters still lagged behind older voters. A decade ago, 49% of 18-24-year- olds showed up at the polls to vote for Barack Obama.

Since President Trump was inaugurated, young activists have been participating in marches and rallies, fighting for issues ranging from equal rights to the environment. Perhaps nowhere have younger people been more present than in the issue of gun control. Following the horrific shooting at Parkland, Florida’s Marjory Stoneman Douglas High School, classmates of those killed have become vocal and impactful advocates for gun restrictions.

Back in March one of the Parkland advocates, David Hogg, said, “We are going to make this a voting issue.”

Millennials in the Midterms

Whether Millennials are motivated to vote because of gun control or another issue, they seem to be showing up. According to a poll by CNN and Catalist, there has been a significant increase in young voters, compared to 2014.

According to a poll conducted by the Institute of Politics at Harvard Kennedy School, 18 to 29-year-olds are “significantly more likely” to vote in the 2018 midterms than they were in 2014. Forty percent of 18 to 29-year-olds were definitely intending to vote. (Remember, since 1986, the percentage of young voters only edged over 20 percent two times, in 1986 and 1994).

In particular, three states are ones to watch: Florida, Georgia, and Texas.

In Georgia, the close gubernatorial race between Democrat Stacey Abrams and Republican Brian Kemp has engaged young voters. Per a CNN poll, the percentage of early voters who are younger than 30 in the state has more than doubled since 2014.

The neck and neck Texas U.S. Senate race between Sen. Ted Cruz and Democrat Beto O’Rourke has similarly captured the attention of young voters. A CNN poll also shows the percentage of early voters under 30 has more than doubled, from 4.4 percent to 10.1 percent.

What Can We Do to Encourage Younger Voters

While the expected turnout, especially taking into account early voting numbers, seems encouraging, there are still steps we should take to encourage early voting. One of these steps is making voting more accessible.

Requiring voter IDs may discourage younger voters, especially students who may relocate often. The address on their IDs may not match their voter registrations. Last summer, Gov. Chris Sununu, a Republican, signed into law House Bill 1264, which would require students and other part-time residents to become “permanent residents” if they wanted to vote. Students and others would need to pay for a new in-state driver’s license or register their cars in the state in order to vote.

However, days before the midterms, Hillsborough County Superior Court judge Kenneth Brown issued an injunction to Senate Bill 3, which would have changed the previous domicile requirement to reflect the House Bill 1264 requirements.

Making voting more accessible to students is one way to increase voter turnout. States should also increase access to vote by mail and early voting to engage more voters of any age.

California’s pre-registration for 17-year-olds is another step in the right direction. Young Californians may pre-register to vote online, enabling them to vote once they turn 18. This not only makes registration more accessible but invigorates young voters.

The future of our country and our democracy rests in the participation of young voters.

To pre-register to vote in California, visit the Secretary of State website