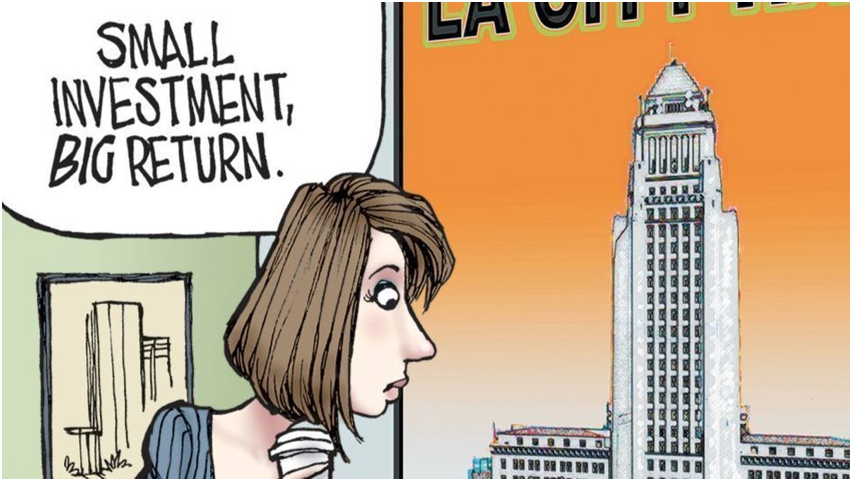 They are mistaken. Our high housing costs are due to political corruption. Los Angeles is not the only city victimized by corrupt land developers, but LA may be the worst.

Looking at the city of Houston whose low range of housing affordability matches that of Detroit, one can see that Houston does not restrict supply to a few areas.  Because Houston allows construction on its periphery, developers cannot force people into a few restricted areas such as Transit Oriented Districts [TODs]. Los Angeles, on the other hand, restricts construction to certain core areas and a concentration of supply causes higher land prices, which makes those few landowners wealthy.

Restriction of Supply is the Key to Hyping-Up Housing Prices

As previously explained, Mayor Eric Garcetti has destroyed so many rent-controlled units that he has decimated the supply at the low end of the rental market. City Hall prevaricators falsely claim that a lack of construction has caused the shortage of rent-controlled housing, which is a silly notion, and no one should fall for it. It is impossible to construct rent-controlled apartments because to qualify for rent control, the unit has to have been built before 1979. One hundred percent of the shortage has been due to destruction of RSO units.

People buy into the myth that increasing the cost of land reduces housing costs. If that were true, rents would be lowest in DTLA where density is greatest. Density is not the result of high demand, but rather of corruption which favors approving projects where they benefit campaign contributors while limiting construction where it would otherwise occur.

People mindlessly claim that property should be valued at its “highest and best use.” Translated into real world talk that means, “Give your money to the owners of a few parcels of land so they become wealthy and you remain poor.”

In a properly run city, office and residential density would be much more evenly spread throughout the entire urban area. While we would have some denser areas such as Government centers like in Van Nuys or near the Music Center or at a few nighttime entertainment centers around the urban area -- e.g. Hollywood, Sunset Strip, WeHo -- no part of the city would be zoned for hyper-density such as DTLA is.

In 1948, the city established the Community Redevelopment Agency [CRA], a cornucopia for criminals. Although the state abolished the CRA in 2011 (effective 2-1-2012) to prevent the city’s bankruptcy, we still suffer from its legacy of corruption. Basically, the CRA was a combination of Soviet style central planning run by the landowners who wanted to steal the land wealth from the rest of the 5,000 square miles of the greater Los Angeles area and concentrate it on their own small parcels such as in Bunker Hill.

As far back of the 1910s, Angelenos knew that DTLA was a crowded nightmare from which the city needed to extricate itself. In 1915, the city’s civil engineers extensively researched all major urban areas in the United States and Europe and set forth certain principles for Los Angeles’ future well-being.

They warned that the “Highest and Best Use” myth would irrevocably harm the city. Why people believe such an absurd idea defies comprehension. The person who benefits from this nonsensical idea is the person who owns the land. There is no honest reason for the city government to appraise land at its densest use. Well…there isa corrupt reason. The higher the appraisal value, the more property taxes can be collected and the more loot the politicos have to dole out to their buddies.

Thus, the tax collector and the landowner conspire to lie to the rest of the community and claim that certain land should have very high density. The illicit bargain is that the government will allow the owner to construct so much density on the parcel that he will be able to pay high property taxes. Of course, the landowner passes the higher taxes to his tenants.

Reality: The Highest Use is Often the Worst Use

When the city encourages high density in certain cores while restricting the moving of offices, industry and retail to where the population is moving, it makes the central landowners wealthier, but everyone else suffers.

Although Dorothy Parker did not say that Los Angeles was “72 of suburbs in search of a city," the concept that Los Angeles was a gaggle of suburbs held some truth and it also held a huge fallacy.  The truth was that in 1915, LA’s planners knew that the mathematics of transportation made a dense core a disastrous idea for a huge circular geographic area like LA. The lie was that the suburbs were searching for a city. No! After WW II, people were fleeing urban cores. The only people who wanted a dense city where the crooks who owned land in the Basin. In 1948, the CRA upended capitalist supply and demand and imposed the Sovietized Bunker Hill project upon us.

Van Nuysians did not want to waste an extra hour in freeway traffic when a nice office complex could be located near their homes. The lawyers at Cheatem and Howe did not need to locate in the same office tower in DTLA as Goniff and Mamzer. While physical proximity is necessary for Guatemalan peasants to sell their papayas and fish in the town square, accountants, lawyers and businessmen have no need to crowd together.

Presently, we are being told that we need to spend billions of dollars to build affordable housing where the city’s density is greatest, e.g., Koreatown. Economic reality dictates that affordable housing must be located where the land values are the lowest. Sound public policy would spell doom for the corrupt developers who have bought up land in the expensive Transit Oriented Districts [TODs]. Not to worry. LA is not about to embark on an era of wise public policy.