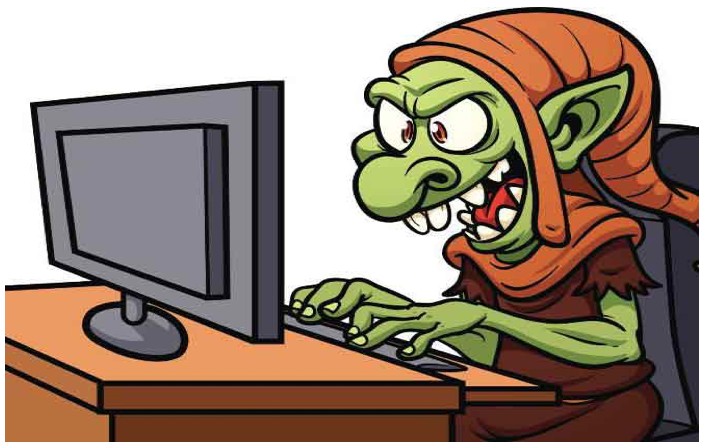 BELL VIEW--My name is David, and I’m an Internet troll. Here’s my story: I started in the Clinton years, picking fights in the comments sections of wingnut websites like townhall.com.You might think this type of thing would get boring after a while – but addiction doesn’t work that way.

I still remember the time a misguided son of the Confederacy accused me of writing a bunch of “dribble,” and I said – “You mean `drivel,’ right? Dribble is what you do when you think about the Constitution.”

And it felt good to be called an idiot and a moron and a communist, and to give it back post for post ad-infinitum. I should have resisted the urge to pick fights with pinheads – but damn it felt good. The advent of Facebook – for trolls like me – felt like that moment when Dorothy opens the door and steps out of her black-and-white cabin into the wonderful world of Oz. I can still envision the architecture of endless wormholes of argument descending like some dorm-room Escher poster into the depths of nonsense and futility.

Eventually, my jaw began to ache and I had to take a breather. Still, every once in a while, I take the bait, pick up my shovel, and start digging another wormhole.

That’s why I can relate to the Trump rump – the 28% to 32% of the population who support Trump no matter what. These people really don’t care about anything so long as Trump keeps pissing people like me off. They can lose their jobs, their homes, their kids’ futures, the water they drink, the air they breathe and still they’ll back Trump because – if people like me hate him – he must be onto something. I’m not going to say you can’t argue with that – because I’m living proof that you can– it just doesn’t get you anywhere. Internet trolls do what they do because they believe in the ultimate checkmate: the argument so flawless your opponent agrees to drop his (and it’s almost always his) entire political philosophy and bow down to your impeccable logic.

I like to think my addiction to trolling arises out of some concern for my fellow human beings. Being right all the time can be exhausting. But someone’s got to do it. Right? For the good of humanity. Can I help it if I get a cheap thrill out of whacking someone over the head with a well-placed syllogism? Sure, I like to see my enemies suffer, but, at some point, even I have to admit I don’t want to burn the house down just to piss off Jeff Sessions.

Maybe being on the side of Truth, Justice, and the American Way gives me false hope. Without common ground, each side will drag the other over the abyss. And every day, the edge of the abyss draws closer. Not too long ago, a “friend” accused me of “Needing to be right all the time!!!!!!” (Exclamation points in original.) Although I remain convinced of the difference between being right all the time and needing to beright all the time – I’m willing to engage in a little self-reflection for the good of the country.

I’ll admit I enjoy it when farmers who supported Trump suffer because of his tariffs – even if that means I have to pay a little more for lettuce. I’ll admit I didn’t shed too many tears for the Iraq War Veteran Trump supporter whose undocumented wife got deported by the Trump administration.

But even though most of the middle of the country seems willing to turn the breadbasket of the world into the new Sahara Desert because they don’t like the cut of my Prius – I don’t really want these people to fail. I don’t wish disaster, poverty, and disease on them or their children just because they like the people I hate.

And I can’t help believing they feel the same way. The Trump rump are addicts – just like I used to be. But the rest of us don’t need to go over the cliff with them. By the end of his term, George W. Bush – who at one time sat at 90% in the polls – had an approval rating of 25%.

I believe Trump can whittle that down even lower. The rot of his corruption just hasn’t had time to set in. I’m living proof that even the most hardcore Internet troll can get off the pipe to save his own skin.