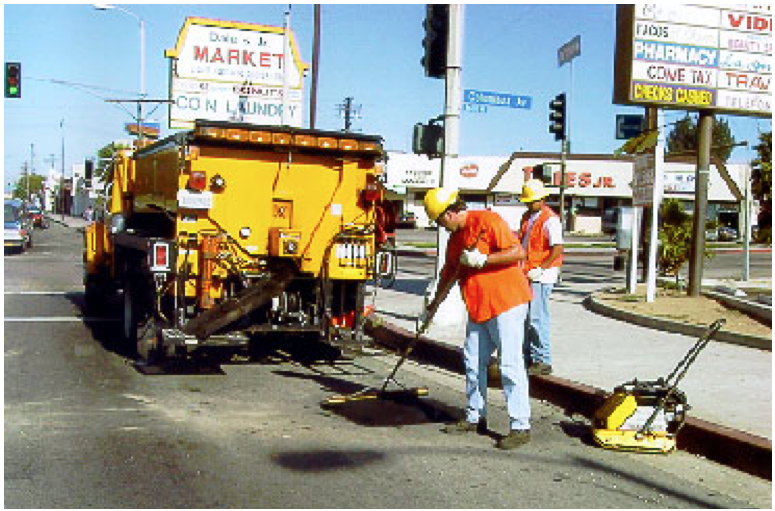 (that is a BIG thoroughfare, which you probably already know, even if you don't live on the Westside): there's no money, nor any plans for money, for either signage or regular street-sweeping any time soon!

Several prominent community leaders and MVCC board members have raised the issue with City Hall, and apparently there has been, isn't now, and won't be any effort to have the City's general budget go into regular street-sweeping any time soon!

Which leads, of course, to the question anyone reading this should ask themselves: what OTHER streets in your neighborhood aren't getting regularly swept and maintained? Probably a LOT more than you realize!

And which also leads to five basic needs that reasonable taxpaying citizens want from the City Hall (and to which they are increasingly paying taxes, fees, assessments, etc.):

The Bureau of Street Services merits commendation for their diligence and outreach. Their small asphalt repair blitzes are an example of what the City gets right. Either the repair gets done promptly, or gets placed into a large asphalt repair list, or gets assigned somewhere else.

But the tires getting popped (I've gone through several tires over the past year alone on Sepulveda Blvd and adjacent areas), the transmissions getting messed up, and/or other damage to one's car, are all inappropriate and unacceptable.

Part of the problem about "fixing the roads" right now is that the Mayor and Planning on down have been promoting the meme that if something bad happens to you and/or your car while you're driving, well...you kind of deserved it, because car-drivers are evil. They're messing up the environment, the economy, and the future of this planet.

Which flies in the face of the fact that despite MOST Angelenos wanting more mass transit and mobility options, MOST Angelenos are also buying more cars than ever! Regardless of race, socioeconomic or immigrant status, the car-buying and usage is more than ever.

Apartment renters are desperate to find parking, and the fact that the general budget of Los Angelenos is SUPPOSED TO be arranging for parking structures and lots and holding developers' feet to the fire to create parking, is all leading to one big crisis of confidence that just keeps getting worse.

In short, City Hall is spending its money somewhere OTHER than what it's supposed to be spending on with respect to public safety and infrastructure. And if it gets more money, then it keeps spending money somewhere ELSE.

Other than repair of the sidewalks, and replacing ficus trees with more native, less destructive trees and replacing thrashed sidewalks with walkable alternatives, there's also the issue of allowing pedestrians the mobility of these taxpayer-funded walkways.

Telling the police to, in effect, "stand down" or lose their jobs with respect to homeless rules and public safety, has led to a "new normal" of public urination, defecation, and prostitution that isn't just merely an issue of helping those who are going through hard times.

Shall Los Angeles follow San Francisco into the abyss of chaos and anarchy? Shall we now print maps of where tourists should avoid if they think that human feces on the sidewalk is...bad?

5) Evening meetings, and a rule of the majority!

Any daytime, weekday meeting is meant to help only one group of individuals: the rich, connected and activists who are full-time and don't work. Evening meetings for important City issues allows everyone access to City Hall processes and functions. Weekends are also OK for daytime meetings.

Having developer-paid goons and those who are full-time (many paid) activists allowed an "inside track" while the rest of us have to give up work is blatantly unfair and undemocratic. Pretty obvious, right?

So, fix it. If the Mayor wants to prove he's not coin-operated, then he can change all this with virtually a snap of the fingers. Ditto with City Hall.

Or do we have to wait until the next election cycle to get these "no-brainers" the attention they've deserved for so many long years?