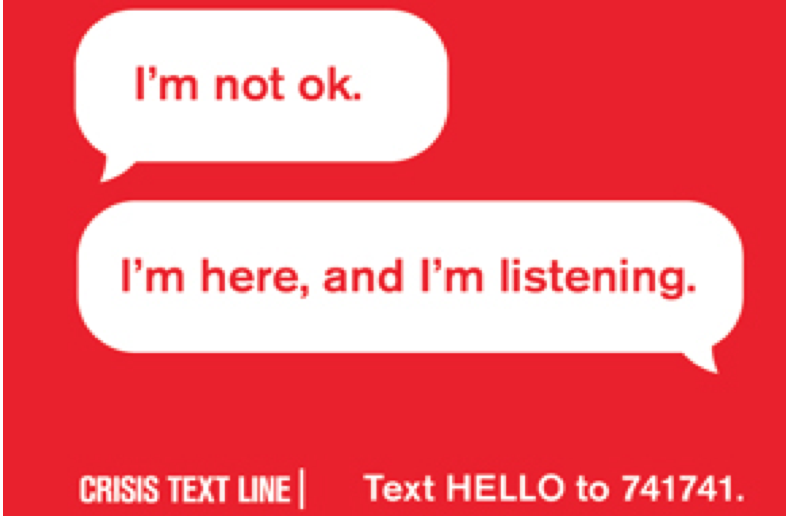 There’s a lot of pain out there -- and epidemic numbers of suicides, especially among young people. And older people. Beth Cone Kramer reported on the dimensions of the crisis on these pages last week in her Suicide: An American Crisis:

“Both Spade and Bourdain were part of a demographic in which suicide rates have been substantially increasing, according to an abstract released in the Morbidity and Mortality Weekly Report.   The study, which tracked suicide statistics from 1999 through 2016, found that overall suicide rates in the United States have increased by 30%, with mental health issues one of many contributing factors.”

I signed up to volunteer as a Crisis Counselor with Crisis Text Line at the beginning of the year, and when I logged in on the Friday that we learned of Anthony Bourdain’s suicide, the number of texters waiting to be helped was the highest I’d ever seen. That weekend, conversations were up 116%.

On that same Friday, and throughout the weekend, hundreds and hundreds of volunteer Crisis Counselors logged on to the organization’s platform and helped talk anonymous texters through their pain, depression, thoughts of suicide. It was an organic, inspiring response to an urgent immediate need, and it was an inspiring night.

Our goal is simple: we aim to help texters move from hot crisis to cool calm.

And while it may be counterintuitive to offer crisis help by text to those of us who remember the inception of the fax machine, it works. This 2015 story from the New Yorker R U There? tells the story:

“People who spent their high-school years chatting with friends on landlines are often dismissive of texting, as if it might be a phase one outgrows, but the form is unparalleled in its ability to relay information concisely. The act of writing, even if the product consists of only a hundred and forty characters composed with one’s thumbs, forces a kind of real-time distillation of emotional chaos. A substantial body of research confirms the efficacy of writing as a therapeutic intervention, and although tapping out a text message isn’t the same as keeping a diary, it can act as a behavioral buffer, providing distance between a person and intense, immediate, and often impulsive feelings.”

Eight years ago this past weekend, I was sustained by the love and assistance of strangers. As I’ve shared — Remembering Matthew, With Love Always  -- “Marlene from the Mayor’s Crisis Response Team stood with me for hours in the middle of Sunset Blvd., barricaded and blue-lit, waiting to confirm that the young man shot in the back of the head on the floor of the Higher Path medical marijuana dispensary was mine. She has a Jack Russell Terrier. I’ll never forget her, holding me up that night, and all the volunteers who respond to LA’s tragedies and emergencies.”

Then Luisa and the whole crew at Victim/Witness Assistance in the DA’s office wrapped me in their love and helped me through impossible days. When I retired, I promised myself I’d find a way to give back, to pay back all that love and support.

You can do it too: Start the volunteering process here!

Turns out, the work is hard but good and wonderfully rewarding. I worried that I’m too much of an empath, that I wouldn’t be able to do the work without feeling every texter’s pain. And I do. But the wonder of an anonymous conversation with a (mostly) young person looking for someone to talk to help ease their pain? That I can do. Plus, the entire Crisis Text Line organization works hard to support approximately 4100 volunteer counselors eating Cheetos and “talking” to texters in our puppy jammies. Ultimately, they make the work joyous.

“Knowing you made someone feel less alone makes all the difference.”

“This is the work I was placed on the planet to do.”

“If you can write a sentence, have compassion, and can give your time, you can really make a difference.”

These stories in the New York Timesoffer an excellent look at the organization, its operations, and its results, in in-depth articles two years apart — most recently, A Crisis Line That Calms With Texting and Data:

“In this column two years ago, I reported on the Crisis Text Line and explained how it vets, trains, coaches and supervises volunteers scattered across the country, enabling them to provide high-quality counseling over a digital platform. At that time, the service had 600 counselors who had exchanged eight million messages with people seeking assistance. Today, it has over 3,700 counselors who have exchanged 56 million messages. And that number is expected to double within a year.

This video Can Texting Save Lives? inspired me to apply, go through a complete background check, the intensive 30+ hours of training, to ask others for a reference! Be sure to watch it with a tissue handy.

In Los Angeles anyone can text LA to 741741 as the City of Los Angeles has partnered with Crisis Text Line. Crisis Response Team Program Manager Mandy Pifer says, “Mayor Garcetti and Nancy Lublin have been personal friends for decades. So, when Nancy told him about Crisis Text Line, and given the importance of the Mayor’s volunteer Crisis Response Team, he knew immediately that this would be a great partnership for the City of Los Angeles.”

“We are hoping to expand the circle of support, especially mental health support, in Los Angeles. Having a new way to reach someone who cares, when someone is needed the most, is best -- not just for the individual, but for the community at large.”

I’ve never been able to sleep on Sunday nights so that’s when I volunteer. Us folks on the west coast are particularly helpful during those wee hours. The organization is wonderfully protective of the data and information of texters, so I only get to see “scrubbed” feedback.

Here’s some feedback I’ve received in my short time so far:

In less than an hour, we’re able to make genuine connections that help ease real pain. Want to help save lives too? Apply to be a Crisis Counselor here!

And share this, please, with the first three people you thought of while you’ve been reading this.

Just this week, the LA Weeklypublished a thoughtful piece Suicide Is a Tragic Hollywood Story That Needs a New Ending that opens with this insight:

“The entire country mourns when a celebrity or public figure ends his or her life, but in Los Angeles it can seem even more impactful because the entertainment industry is based here, and more often than not, they had a connection here. The grief feels personal because of the influence such people (musicians, actors, artists) had on our lives and the world, even if we didn’t know them. The recent losses of designer Kate Spade and chef/world traveler Anthony Bourdain in the same week have brought the problem to the forefront, but this isn’t a famous-people issue. Many struggle with depression and feelings of hopelessness, especially in this city. As suicide rates in L.A. continue to climb, we feel it is especially important to talk about prevention and awareness. For those who live with this darkness and even for those who don’t, understanding the psychology pertaining to suicide is the first step to ending or at least curbing the problem. Please take the time to read and share these words from a crisis line counselor and other mental health professionals. There is always another way.” — LA Weekly

The American Foundation for Suicide Prevention‘s Helping a Friend via Text: Tips from Crisis Text Line is a great guide for helping.

Dealing With Crises in a Text-Savvy Generation:

“The chats are also creating a trove of information on distress nationwide. The highest per capita texts come from Montana; Midwesterners report the most bullying; the coasts are the most stressed; and people in the South most often mention L.G.B.T.Q. issues. (You can track the state-level data in real time at crisistrends.org.)”

What to Do When a Loved One Is Severely Depressed:

“‘It’s OK to ask if she is having suicidal thoughts.’

Although you may worry that asking, ‘Are you thinking about killing yourself?’ will insult someone you’re trying to help — or worse, encourage her to go in that direction — experts say the opposite is true.

‘It’s important to know you can’t trigger suicidal thinking just by asking about it,’ said Allen Doederlein, the executive vice president of external affairs at the Depression and Bipolar Support Alliance.”

"’First, if you're hurting, there is totally help for you,’ she says, noting that many adults now reach out to the text line. ‘The other thing is, the average young woman would make an amazing counselor.’ The volunteer program involves a 34-hour, six-week online training program, and then a commitment of four hours a week for a year. ‘I think American women want to help other American women,’ Lublin says. ‘In a way it's like Dress for Success: one woman picking an outfit from her closet that will change another woman's life—anonymously. With CTL, it's one woman helping another get out of a hot moment. It's come full circle.’"

“When a young woman texted DoSomething.org with a heartbreaking cry for help, the organization responded by opening a nationwide Crisis Text Line for people in pain. Nearly 10 million text messages later, the organization is using the privacy and power of text messaging to help people handle addiction, suicidal thoughts, eating disorders, sexual abuse and more. But there's an even bigger win: The anonymous data collected by text is teaching us when crises are most likely to happen -- and helping schools and law enforcement to prepare for them.”

“The Crisis Text Line team knew from the beginning that, if it was successful, it would be collecting more data than ever before about teens in trouble. Research has shown that it’s easier for teens to open up via the anonymous texting platform, rather than a more intimate phone call. But beyond helping individual teens, Lublin’s idea was that Crisis Text Line could pool all of its data to advance the crisis counseling field, at a time, today, when suicide was the third-leading cause of death among youth age 10 to 24.”

If you are having thoughts of suicide, please know that you are not alone. If you are in danger of acting on suicidal thoughts, call 911. For support and resources by phone, call the National Suicide Prevention Lifeline at 800-273-8255 or text Crisis Text Line at 741741.

(Julie Butcher writes for CityWatch and is a retired union leader now enjoying her new La Crescenta home and her first grandchild. She can be reached at [email protected]or on her new blog ‘The Butcher Shop - No Bones about It.’) Prepped for CityWatch by Linda Abrams.