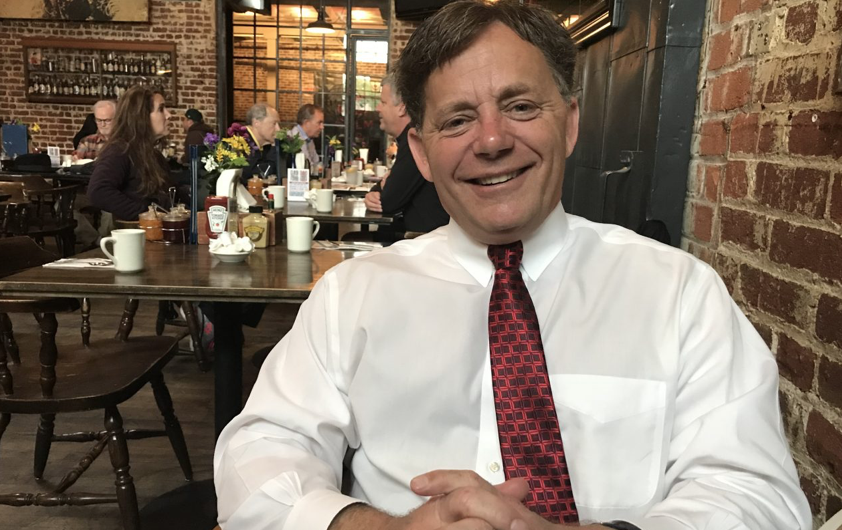 ELECTION WATCH--On Tuesday, voters in the district that stretches from Anaheim to Chino Hills will decide whether to fire Newman halfway through his first term in the Legislature.

His offense: voting for a transportation bill last year that raisedthe state gas tax and other vehicle fees. The bill eked by thanks to the legislative supermajority the Democrats secured after Newman’s surprise win. (They’ve since lost it, but the appetite for revenge endures).

At stake in the recall race is more than the short tenure of a state lawmaker. The fate of Sen. Josh Newman will provide an object lesson to politicians of all stripes on what happens to vulnerable politicians who take controversial votes—and how well parties and other interest groups can (or can’t) protect them from ticked off voters.

Newman, along with most Democrats, argues that it’s unfair to recall a lawmaker who won his district “fair and square.” ”I’ve never been accused of any malfeasance or anything else,” he said. “So what’s the basis for a recall? Just because you can. And it’s not right.”

The response from the pro-recall side: that’s politics.

“This isn’t about waging war on anyone,” said California Republican Party spokesman Matt Fleming. “This is about giving the voters the option to recall someone who in his first year has proven to be greatly out of step with his district.”

And although Gov. Jerry Brown vowed to defend bipartisan-minded Republicans at this year’s state of the state speech—telling them “I’ve got your back”—not all Democrats got the message. The Democratic Congressional Campaign Committee has attackedRepublican Assemblyman Rocky Chavez for his supportof cap-and-trade in a strategic attempt to undermine him with conservatives who might otherwise support his bid for Congress.

Now that Newman is facing a possible pink slip for a vote on a tax that was backed by the governor, the vast majority of his Democratic colleagues, a broad coalition of business and labor organizations, and even one Republican in the Legislature, he says he’s the victim of the very political polarization he ran for office to fight.

“I ran as this kind of almost naive idealist and to think that I am the one guy in this giant state who is being chased down,” he said. “If this is what an elected official can expect for going to Sacramento and doing your job consistent with the oath you take, that is a pretty chilling thought.”

Republicans and other anti-tax activists launched the recall campaign within a month of Gov. Brown signing the $52 billion transportation bill into law. Newman was neither the author nor the deciding vote. But his 2016 victory gave the Democratic party their commanding control of the Senate. Plus, his voters might be particularly receptive to an old-fashioned tax revolt.

“I hear the guy is a nice guy, but the reality is that’s a conservative district,” said Jon Coupal, president of the Howard Jarvis Taxpayer Association, which has spent $115,000 supporting the effort. “I wouldn’t call [the recall] a ‘nuclear option. I would call it a ‘useful tool.’”

When Newman won his seat in 2016, it was by less than a single percentage point, the lowest margin of any state legislator that year. Registered Democrats now outnumber Republicans in the district, but that’s a recent development and one that Republicans believe they can overcome on Tuesday by appealing to voters’ dislike of higher gas prices. Getting the grassroots to turn out against Newman could also help the party’s congressional prospects. Republican Rep. Ed Royce’s district, one of the most competitive House races in the country, overlaps with Newman’s.

A recent USC Dornsife/Los Angeles Times pollfound that 64 percent of voters in southern California outside of Los Angeles want to repeal the recent gas tax increase, compared to 28 percent in favor of keeping it.

“Giving the voters the opportunity for a re-do in this instance is highly appropriate,” said the GOP’s Fleming.

“Appropriate” is a relative term. Democrats and other critics of the recall say its a constitutional provision that should only be used as a last resort. “Recall elections are an extreme and unusual form of political decapitation,” the editorial board of the Los Angeles Times arguedearlier this month. ”Newman is not being targeted for anything so fundamental as committing a felony, reneging on crucial promises to voters or exhibiting unhinged or inappropriate behavior.”

But the California constitution makes no such distinctions. “Section 13 of Article II says ‘Recall is the power of the electors to remove an elective officer.’ That is all,” said law professor Mary-Beth Moylan at the University of the Pacific. “It does not say ‘for abuse of power’ or ‘for really bad acts.’”

Nuclear option or not, both of California’s political parties are going all out in this recall race.

“He’ll have whatever he needs,” Gov. Brown saidof Newman during a visit to Orange County the day after the recall campaign was announced.

The state Democratic Party has spent over $1 million to “maul the recall.” Millions more have flooded into the district from organized labor, progressive political organizations and other interests seeking to defend the new transportation spending. Newman has also had some legislative help. In June, Democrats amended the state recall process so the vote occurs not during a special election but on primary election day, when turnout is expected to be higher. They also successfully petitioned for a changeto campaign finance law, allowing Newman to raise more money from his colleagues.

And for all the concern about how recalling legislators for unpopular votes might set a bad precedent for future political behavior, the GOP’s Fleming says that ship has sailed. He points to the failed attempt in 2008 to recall Republican Rep. Jeff Denham, then a state senator, for his refusal to support a Democratic budget.

“Sure, it’s not something that should be done every single time,” he said. “But I think the justification will be when the voters recall Josh Newman.”

(Ben Christopher writes for CalMatters  … where this piece originated.)