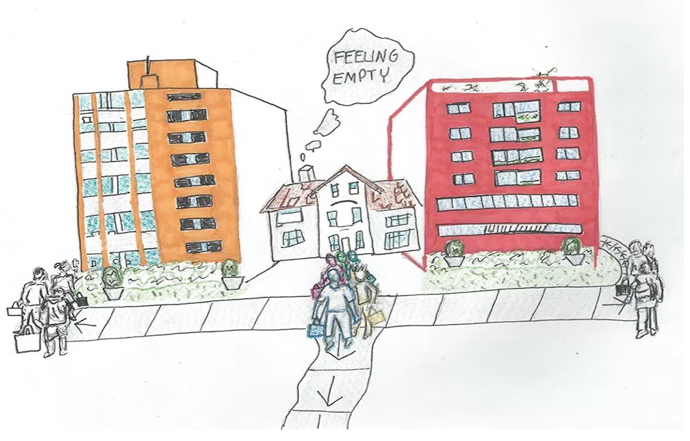 On March 1, 2018, Senate Bill 827 was amended and acquired a co-author, Senator Ben Hueso of the 40th District (Imperial County and the eastern end of San Diego County).   Apparently, the sponsors of SB 827 had some difficulty in finding an ally from Southern California, but Senator Hueso stepped up to blunt what was being criticized as a frontal attack on Southern California by Northern California pro-development forces, including those who gave us the wondrous Millennium Tower in San Francisco – the west coast's own leaning tower of Pisa at 301 Mission Street.  Of course, SB 827 will not affect Senator Hueso's District 40 since the Imperial Valley Transit System has a bus that runs once an hour during peak periods.

A. Who is affected? Every owner and every resident of land that is within a:

Senator Wiener, in discussing the ½ mile radius at a recent Town Hall in Los Angeles, only mentioned rail or ferry, not buses, but that is wrong.  The original bill, as introduced, referenced Public Resources Code section 210643 for the definition of "Major Transit Stop." Although the proponents of this bill talk about "Major Transit Stops" in terms of rail and ferry, the definition makes it clear that Major Transit Stops include each "intersection of two or more major bus routes with a frequency of service interval of 15 minutes or less during the morning and afternoon peak commute periods."

A "High Quality Transit Corridor" is a single lonely bus stop if it has buses scheduled in no more than 15 minute intervals during peak commute hours. So, if you live or own property within ¼ mile of a single bus stop or within ½ mile of a subway, light rail, or intersecting bus stops, this bill affects you.

Bohol does it affect me? If you are within the area affected, SB 827 eliminates:

SB 827 removes all land use regulations for all affected areas statewide and replaces them with the following:

In each case,SB 827 offers downward adjustments for narrow streets and upward adjustments for affordable housing.  On a narrow street that is less than 70 feet wide from property line to property line (not curb to curb), the 85-foot height is reduced to 55 feet and the 55-foot height is reduced to 45 feet.  Corner lots are evaluated by the widest street on which they front.  All of the above applies, even if what is built is a large single-family residence without a single unit of additional housing, much less affordable housing.

In addition, any developer who provides the minimum affordable housing is entitled to “stackable” upward adjustments of up to 35% in height and FAR, resulting in state mandated zoning and land use regulations that override all land use controls to permit the following in affected areas:

SB 827 only provides protection to "resolution(s) explicitly authorizing a review process for demolition permit applications."  The LA Municipal Code has no meaningful ones except for landmarked properties, and even those are regularly waived, minimally fined, or simply not enforced.

For those who are ready to act NOW on SB 827, here is a short practical list of things to do:

A Committee Roster is available here for those who want to call or email every member of the Committee, including the co-sponsors.

The timing is urgent.  If you are opposed, start dialing and emailing NOW to everyone on the roster.  When you are done with that, then contact everyone in the State Senate and Assembly.  Sign up to track the bill.  Make plans to attend the public hearing after it is set, if you possibly can.   My understanding is that this Committee is fast tracking this bill, and that a public hearing is anticipated for April.

This is a state-level bill.  Writing letters to our county supervisors, city councils, and our mayors is helpful to let them know we are watching them and expect them to vigorously oppose this legislation, but ultimately they are not the decision makers.  We need to be heard at the state level, and we need to make this a touchstone issue for state senators and assembly members if it is to be defeated.

III.  There is No Baby In This Bathwater – The Approach is Just Wrong

Senator Wiener indicated that he and his office would "welcome" specific comments to amend SB 827 to make it better, but made it clear that he is not listening to the opposition.  I offer and take little comfort that this bill can be "fixed" by amendments – it cannot.

This bill does not require a single unit of affordable housing, not the 20% in the Government Code or the paltry 11% minimum required by Los Angeles Transit Oriented Community Guidelines.  The bill has many convoluted and unfunded provisions about relocation, displacement allowances, and rights to come back for displaced moderate and low-income residents.  But, it is silent on where these tenants will live in the 3-5 years of construction. And, the bill does not require a single unit of new affordable housing.  In addition, there are no agencies specified for enforcement of its provisions, and even if there were, enforcement is always a problem since few displaced individuals have the resources to hire a lawyer to secure their relocation assistance.

While the bill requires compliance with "any local inclusionary housing ordinances", that is part of the continued attacks on our neighborhoods by developers.  The Transit Oriented Community Guidelines (TOC) effective in September 2017,apply to all 5+  units, whereas Measure JJJ, on which they are based, was limited to developments of 10+ units-- to ensure higher densities.  Since the TOC Guidelines did not override other City ordinances on zoning, HPOZs, and other matters, and it did not let developers build what they really are after – McMansions and market rate apartments where they are not permitted by local zoning.

Instead, developers took their case to Sacramento.  At the state level, Los Angeles, other cities, and local voters have less clout.  A number of senators and assembly members, like Senator Wiener, represent already overbuilt districts or, like Senator Hueso, represent districts where land is still less populated, inexpensive, or in the desert and rural areas where developers would not build a dense project .

This is an issue that should be of concern to everyone in the state: land use, neighborhood planning, open space, zoning, advocates for tenants, wildlife preservation, urban sustainability, trees, affordable housing and economic justice are all swept away on behalf of for-profit developers.  Balancing the private profit motivations of the market with the public needs for open space, sustainable living, affordable housing, inclusionary housing, historic preservation, an urban tree canopy, pedestrian and bike friendly routes and other land use items historically has been a local issue.  What is right for San Diego's OldTown is different for Laguna Canyon's Artist Colony or Newport Beach's Balboa Island or Santa Ana's downtown or San Bernardino or mid-city LA or Compton or Beverly Hills along Sunset Boulevard or along Wilshire.  Neither San Francisco, Sacramento, nor anyone else can or should to dictate these issues across the State without the input of local neighbors affected by a significant ordinance or project.

In a Town Hall organized by Assembly Member Laura Friedman, representing the 43rd Assembly District (Burbank, Glendale, La Canada Flintridge), which you can view here, Cynthia Strathmann, from SAJE, pointed out, and the other panelists agreed, including Senator Wiener, that this bill would cause massive displacement, gentrification, and more homelessness in the short and medium term.

The Senator and the UCLA Professor repeatedly said that authorizing the building of more development would create more affordable housing in the long term, as if that were self-evident, as if we did not already have overcrowded vertical cities with little to no affordable housing ,such as New York City (especially Manhattan), San Francisco and Chicago.

Ms. Strathmann was the ONLY panelist who opposed this legislation, and she came up with an apt analogy.  She was asked what could be done to tweak the bill so that she would support it, and she very politely responded with an apt analogy .  She compared the situation to one where you phoned in desperate need for an ambulance and instead what showed up at your house was a bulldozer.  This is not what you asked for, but also not something you cannot adapt to become an ambulance.  Better to start over.  I agree.

(Hydee R. Feldstein has lived in Los Angeles for 35 years.  She can be reached at [email protected].)