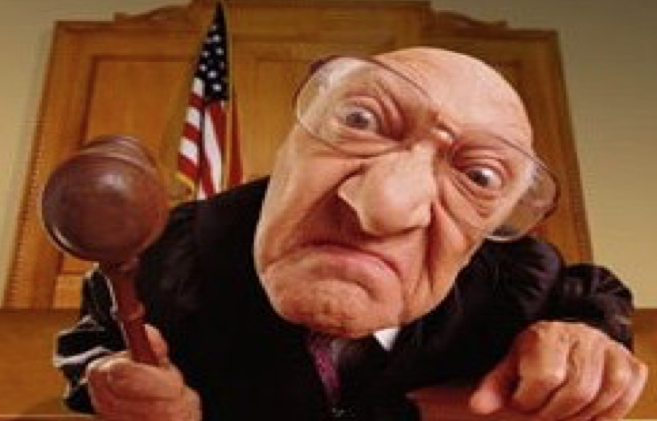 CORRUPTION WATCH-In 1962 when Hannah Arendt wrote about the Jerusalem trial of Adolf Eichmann, she pointed out that great evil can flow from banal, everyday activities, e.g. repetitions of small lies. The Banality of Evil does not deny the individual’s sadistic nature, but rather shows how others fail to see the potential enormity of the evil lurking behind everyday actions.

The evil doers also manufacture Holes of Oblivion into which they cast facts, truth and reality. At the end of World War II, Nazis tried to conceal the Holocaust through mass destruction of evidence. Holes of Oblivion are also one of the first creations of the evil men – false allegations against Jews, courts’ denying testimony of Jews because Jews “refuse Jesus Christ,” confiscation of Jewish property and giving it to the friends of the courts, much like Judge Torribio (Norwalk) and Justice Turner (Dec) did eighty years later.Holes of Oblivion can start as the everyday deceptions to gain public acceptance of bad policies. An example of this is Mayor Garcetti’s lying that increased homelessness is due is due to a lack of construction when its main cause has been the mass destruction of poor people’s homes.

As Arendt showed, banal acts can culminate into monstrous crimes, but the vital ingredient in great evils is the Villainy of Cowardice -- the silence of those who witness the wrongdoing.

Presently, our state courts are deep into the banality of evil, manufacturing their holes of oblivion, while the villainy of cowardice of other judicial officers allows terrible injustices to occur daily. In January 2015, when the federal courts stated that the California judiciary had “an epidemic of misconduct,” the feds blamed our State judges.  (Johnny Baca v Derral Adams, 13-15632)

In that case, the Riverside County prosecutor had enlisted a lying jailhouse informant, after which the prosecutor took the stand and perjured himself by denying that the informant’s testimony had been purchased. Prosecutorial misconduct is aided and abetted by judges who know what is happening and do nothing. Even after the prosecutor’s perjury was discovered in Baca v Adams, the extreme misconduct disappeared into a state court Hole of Oblivion of “no prejudice.” In other words, the perjury did not affect the trial. Yes, they expect people to believe such claptrap.

After the federal court seized upon the case, the State felt compelled to do something. Thus, the California State Bar, which oversees the ethics for California’s attorneys, spent almost two years re-writing Rule 5-110, Special Responsibilities of a Prosecutor. The new rule showed extra concern about prosecutors who conceal exculpatory evidence, that is, evidence which shows that the defendant is not guilty.

Rule 5-110 requires disclosure of information that casts significant doubt on evidence on which the prosecution intends to rely and to promptly disclose that evidence to the court.

It does not take a Law and Order buff to know about a prosecutors’ duty not to conceal relevant evidence.Anyone can be made to appear guilty when prosecutors are able to materially distort the evidence. Thus, Rule 5-110 is not innovative in its requirement that prosecutors have an affirmative duty to bring forth this evidence, even if the defendant had not requested it.

The California State Bar prosecutors, however, do not believe that they should follow Rule 5-110.  They seem to believe that they can knowingly proceed on the basis of perjury and falsified evidence while concealing exculpatory evidence.

The State Bar is so intransigent in its belief that it may rely on perjury and falsified documents that it does not have to show the court any exculpatory evidence, even after the defendant has expressly requested, “Please provide all exculpatory evidence.”

Ramifications of the State Bar’s Behavior is Significant

Balanced against Rule 5-110 is the prosecutors’ desire to win at all costs as well as the belief that too many “bad guys” are on the street. There’s the attitude: “If he isn’t guilty this time, he guilty of something else.” The prosecution’s case can become an evidence-free zone. The use of perjury, falsified evidence, witness intimidation, and concealing of exculpatory evidence violate our inalienable rights to Life, Liberty and Pursuit of Happiness. One is not free when he is incarcerated by perjury, nor is one happy when his livelihood has been stolen by corrupt judges. Yet, to the State Bar prosecutors, pressing ahead with perjury, falsified facts and non-disclosure of evidence are all A-OK.

When the State Bar adopts this attitude, none of us is safe. This anything goes behavior will infect not only the criminal courts, where it is already rampant, but also family courts, probate courts, and regular civil courts -- wherever attorneys can gain an advantage by lying, cheating and setting people up. This corrupt behavior will continue to be the norm.

Judges’ blindness to wrongdoing-- to which the federal courts objected -- brings us to back to cowardice. Not only are prosecutors afraid to expose wrongdoing, but other judges are afraid to expose the corruption. When appellate court justices see their presiding justices rape the law, they cower in silence for fear of the professional retribution if they speak out.

Decades of these everyday judicial evils coupled with the fearful silence of those who should speak up have given us a court system with an epidemic of misconduct. The one step towards reform, new Rule 5-110, is now sabotaged by the State Bar itself which sees no problem with concealing evidence that would reveal perjury and falsification of documents.