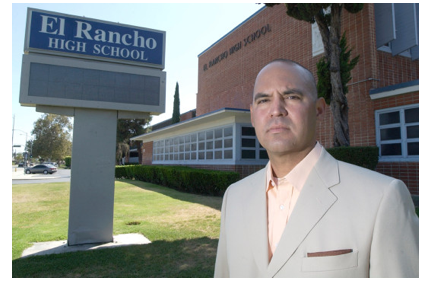 FIRST PERSON--After 40 years of systematically dumbing down critical thinking skills in public education- skills that are a prerequisite for truly understanding Gregory Salcido's actions in context- it is no wonder that today's (1/31/18) KPCC Larry Mantle's Air Talk- as usual- missed the point- since Mantle's usual concern is to be nice, while giving the illusion of not being bias or going into depth on any issue.

I would have addressed Salcido's regrettably necessary comments by putting them in historic context:

In this context, does Social Studies teacher Salcido's comments make sense in explaining who is in our military...and why?

Like Salcido, I have been fired from LAUSD and labeled a racist for pointing out that if you systematically treat people as inferior and make no attempt to develop in them the same potential they have that all people have- if developed in a timely manner- then it is not surprising if our military is now populated by something other than a democratic cross-section of all people in our society, who, like the Germans before them, are only following orders.

(Leonard Isenberg is a Los Angeles, observer and a contributor to CityWatch. He was a second generation teacher at LAUSD and blogs at perdaily.com. Leonard can be reached at [email protected].)