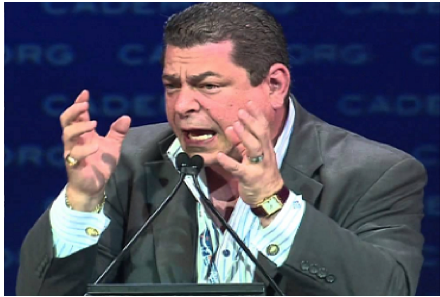 EASTSIDER-In a move worthy of Tom Perez’ recent purge of the DNC Unity Committee, Eric Bauman is trying to lean on candidates for the 2018 Elections to forgo their rights to be voted on at the State Convention next month.

So, let’s see what is truly being proposed. One of the really big deals in being a delegate is that you get to go to the convention and vote to endorse candidates for the various elected offices in California. It is, in fact, a right embedded in the CA Dems Bylaws.

To circumvent those pesky little Bylaws, Eric Bauman has written a letter to potential candidates for office, asking them to waive their rights to be voted on by the delegates. He portrays his request as some kind of horsepuckey party loyalty gesture, but that doesn’t square with what it’s really all about -- control of endorsements.

Even Bauman must admit in his letter, “I recognize that the choice is yours to seek the CDP’s endorsement consideration...” Well, thanks a bunch, Eric. You are truly a mensch for pointing out that you can’t legally do anything about it.

Talk about anti-democratic. As the LA Times pointed out, what this boils down to is Bauman’s recognition that he tore the Party apart with his crooked vote counting decisions so he could beat Kimberly Ellis to be head of the party. Now he’s trying to keep the lid on.

This kind of mentality is not going to switch a bunch of seats from Red to Blue in the Golden State, and his bush-league rhetoric is only going to make divisions widen.

There are a couple of other reasons why this is a stupid attempt to control votes. First, the party faithful that cared enough to run for party office and become delegates are mostly viewed as food sources by the CDP: they simply want their money with a dollop of “vote how you are told.”

Yet the best thing about being a delegate and going through all the arcane, backbiting, boring stuff at a convention is that you actually get to vote on endorsements. And early endorsements are a big deal. Potential candidates seek you out, pay attention to your opinion, and vie for your convention vote.

Local clubs, like the East Area Progressives, have been doing early endorsements for some time. In their case, a recent early endorsement of Luis Lopez ultimately brought him within 1000 votes of the big bucks party establishment carpetbagger Wendy Carrillo in a runoff for the 51st AD. Clear proof that the early endorsement system works.

Further, what Bauman is really trying to do -- and I think he underestimates the intelligence of today’s delegates -- is to get to have his people, aka Executive Board of the CDP, decide who gets endorsed.  The fact that this means endorsements wouldn’t be made until after the Primary elections, sometime in the summer of 2018, evidently bothers him not. Let’s be clear. Eric Bauman wants for himself and the Executive Board to decide the endorsements.

Remember, all these machinations are a desperate attempt to get around the CDP bylaws he is pledged as Chair to honor. The state party bylaws are pretty clear that “This Committee’s endorsement process shall be broadly and fairly representative of the various components of the Party.” (Article 8, Section 1, part d: yes, for democratic!)

So, we will lose the ability to get people excited about candidates, to have a vigorous primary system that gives the occasional grassroots candidate a shot at getting elected to office; we will also lose the momentum that would make ordinary people kick in a Bernie $27 to help out the outsiders.

It’s time for Bauman to retire on his lobbying dollars and allow a younger, more intellectually honest person to step in and run the CDP. Gee, like maybe Kimberly Ellis? Hmm...

Bauman’s exercise is simply a California version of DNC’s distrust of grassroots small ‘d’ democratic candidates, and an attempt to maintain control of the party at any cost. As I wrote recently on the national DNC, “I just don’t understand how their politically correct and morally bankrupt pandering is supposed to gain them election victories.”

Makes me wonder if that shoe doesn’t fit on the California Democratic Party as well.

So, come on down, everyone. Ignore Eric Bauman’s latest suppression technique, have a great convention, and give us a good field of candidates who are grassroots locals and actually stand for something!