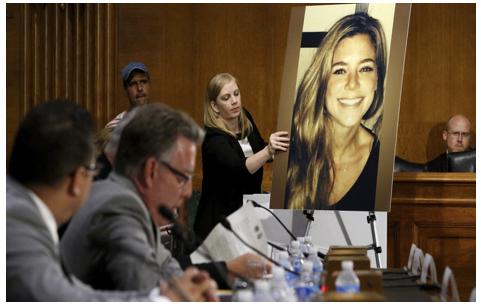 RANTZ AND RAVEZ-Without Justice in our society – and particularly in the Criminal Judicial System -- there is a strong tendency by some members of society to resort to misguided vigilante justice or, as it states in Exodus 21:24, to demand an eye for eye, a tooth for tooth, a hand for hand, a foot for a foot.

A recent outrageous verdict of “Not Guilty” of murder, manslaughter or any other substantial charge rendered by the jury in the off-the-charts liberal and out-of-touch San Francisco Superior Court has caused outrage across America, especially in areas of the country that believe in American Values like Freedom, Honesty, Integrity and Justice for All.

Members of this jury displayed their ignorance and willingness to close their eyes to the solid and cold facts of the unprovoked and senseless murder of 32-year-old Kathryn Steinle in the summer of 2015. She was walking with her father along San Francisco’s Pier 14 when she was shot by a stolen Sig Sauer .40 caliber pistol. The bullet struck Kate in the back and she fell to the ground. While in her father’s arms, she cried out, “Help me, dad.” Just think about your child or grandchild and what you would do in a similar situation. The child you have loved and protected for years is now in your arms bleeding to death. As a former police officer, trained to control my emotions, as well as the father of two sons and two grandchildren, I hate to think how I would react.

Then, after all the sadness, drama and investigations, you learn that the person who fired the gun that killed your daughter is identified as 45-year-old Jose Ines Garcia Zarate, a homeless felon with multiple drug convictions who had been deported for illegal entry into the U.S. five times prior to this tragic and unprovoked shooting.

The Public Defender, Attorney Matt Gonzalez, who is paid with our tax dollars, was able to convince the jury that Zarate just happened to find the stolen gun and when he picked it up it accidentally fired, striking Kathryn Steinle after it ricocheted off the ground -- a very creative defense that the liberal San Francisco jury accepted as truth. I call this twisting the truth, to allow a suspect to go free on the most serious criminal charge.

My heart goes out to the Steinle family who will live with this tragedy forever.

And while family members suffer the loss of a daughter, the taxpayers of California pay for the defense, housing tab and related expenses for Zarate for years to come.

The November 25, 2017, COMPSTAT Citywide Profile report lists the following personnel and crime stats year to date. The LAPD reports that there are currently 10,010 police officers to protect the people of Los Angeles. In addition, the crime stats compare the years 2015 to 2017.

As of January 1, 2018, Proposition 63 will require you to pass a background check and obtain a permit from the California Department of Justice to purchase ammo. The permit is expected to cost $50 and is good for four years. Online purchases of ammo will not be permitted under the new rules.

Stealing a gun of any value is once again a felony punishable by up to three years in prison.

Previously, California law classified stealing a gun valued at less than $950 as a misdemeanor, but Proposition 63 removes this distinction for firearms. However, courts recently ruled that stealing a car valued under $950 is now a misdemeanor. So, if you are inclined to steal a car and don’t want to go to prison for the crime, make sure you steal a vehicle valued at under $950.

I don’t make up these stories. They are just part of what I come across in my search for interesting RantZ and RaveZ.

How about a RaveZ as we enter the Holiday season?

I wish each of you a Very Happy Holiday Season. May this season bring you the Love, Happiness and Good Health you all deserve. With the recent fires that have swept through many areas of Southern California, we need to count our blessings and help those in need who have suffered the loss of their homes. Remember our senior citizens and all those in our community who are alone and without families. Reach out and help your neighbors and spread the good will and happiness of the season.

May God Bless you all.