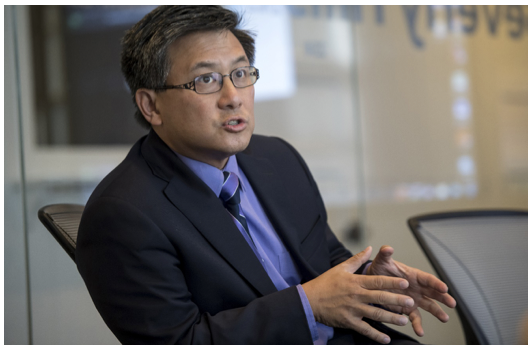 EASTSIDER-Can you be both fiscally responsible and socially progressive? Two very different democratic candidates for governor visited the EAPD on October 24, and the small group of dedicated political activists who chose this meeting over the World Series Game 1 got a real treat.

A relatively small crowd of around 40 came to see not only State Treasurer John Chiang talk about why he should be governor, but also the former mayor of Los Angeles, Antonio Villaraigosa. Great contrast, fun politics.

There have always been two raps against John Chiang in his gubernatorial bid. First,

he is supposedly boring. Witness the CALMatters takeaway from a Sunday (October 22) forum, saying that “John Chiang ‘could use a cup of coffee’.”

The other, and probably more damning criticism of the Treasurer is that he can actually count, and even read a budget. That’s right, he’s fiscally conservative. In fact, he lives on his salary!  This is appalling stuff indeed to many of my very progressive democratic friends.

Well, the John Chiang who showed up at the EAPD meeting dispelled the “boring” myth in spades, and interestingly also demonstrated that you can be both fiscally conservative (as in, be able to actually pay for things without tax increases) and socially progressive. And he has demonstrated this in each of his jobs as a State Board of Equalization member, Controller and now, Treasurer.

The John Chiang at our meeting was forceful, animated, and passionate about why he wants to be our governor. His theme is to grow our economy while at the same time moving the needle on poverty, undocumented or documented alike. He pointed out that something like 1 in 5 Californians lives in poverty, much of which is caused by obscene rental and housing costs.

He’s also very clear about decriminalizing the homeless, and partnering with our public schools to act as a hub for providing services, like health and educational resources for the family. He pointed out that we need to provide over one million more housing units statewide, and that something like half of our population spends 50% or more of its income on housing.

For those who do not know him, Chiang is the son of immigrant parents, suffered the discrimination common during the time when he was growing up (and still exists today), and was able to move past the difficulties, courtesy of public education.

His fiscal and governance abilities are significant. Between the Board of Equalization, the Office of the Controller, and now State Treasurer, John has spent something like 19 years in California Government. And for those who are public employees, who can forget his epic battle  with Governor Arnold Schwarzenegger who wanted to balance the budget during a recession by slashing state employee paychecks. He ultimately prevailed, even as the democratic legislature was largely MIA.

And in a move that should bring fear and loathing into the hearts of politicians and bureaucrats everywhere, Chiang maintains that if elected governor, he will actually enforce the findings made in Audits. You will be shocked to know that currently, enforcement of such findings is rare, to the glee of the guilty.

For the LA democratic clubs, Antonio Villaraigosa is a known quantity. Most people may forget, or don’t know, that when he termed out of the state legislature, Antonio first came back to LA by way of challenging incumbent Nick Pacheco for his seat in Council District 14. Heck, I even hosted a fundraiser for him at my loft in the Brewery Art Complex.

But he didn’t stay as Councilmember for long. In 2005, he ran against James Hahn and beat him, and served as Mayor from 2005-2013. And incidentally, this allowed Jose Huizar to slide into the vacant CD14 Council seat. Sigh.

His theme for the gubernatorial race (aside from being the first Latino Governor since the late 1800’s), is to reverse the momentum of Californians growing further and further apart, both politically and economically. He is aces on immigration, fully supporting the California Values Act (aka Sanctuary Cities). And while ICE has jurisdiction over some matters, he notes that that does not give them the right to go into a hospital, school, or courthouse without a specific warrant for a specific individual.

He also notes that as Mayor, he put up $100 million for affordable housing during a recession, and used tax credits (not to mention the CRA) to build. Somewhat more problematic for me, he (and Ed Reyes) absolutely love Transit Oriented Development.

It is true that LA built tons of concentrated housing along the transit corridors, under the theory that folks could get to work without cars, and would be OK with large housing projects. He was the brain behind the “Subway to the Sea” project, getting Congressman Henry Waxman to repeal the ban on subway tunneling in LA.

There have been lots of light rail projects (remember as Mayor he had the largest chunk of votes on the Metro Board), and there were a lot of variances and sweet deals made to get the TOD housing built.

But a lot of this development took place along freeways, in addition to light rail tracks. Here in Glassell Park, as in other areas of the City, we have multi-unit housing adjacent to the Glendale Freeway, and only now is the City recognizing that breathing polluted freeway air can cause health issues, over and above the generally unhealthy air quality we already have. There are also gentrification issues associated with this planning concept -- just ask the folks in Boyle Heights.

Anyhow, as a campaigner, Antonio is hard to beat. And in terms of governance, he’s pretty much done it all. From the Metropolitan Transit Authority to the California Assembly from 1994-2000 (including a stint as Speaker), until he termed out. He has always been a social progressive.

On the other hand, fate was not kind to him as mayor, where the differences between his campaigning and governance skills became evident. He spent much of his first year as mayor trying to take over the LAUSD Board, even though the City of Los Angeles has nothing to do with the LAUSD.

In running for his second term, Villaraigosa almost wound up in a runoff with Walter Moore.  With only 55.6% of the vote in a ho hum race with no real viable candidate, Moore came within 6% of forcing a runoff. I mean, all respect to Moore - it was astounding that he came so close to forcing a runoff.  To put it mildly, when you can’t put away an election against an unknown underfunded candidate, the gloss is off the car.

Full disclosure, I like John Chiang and have contributed to his campaign. As I have written in a few CityWatch articles, I think that Chiang is the only grown-up in the room who can successfully resist the Democrat’s supermajority in the legislature which is perfectly capable of breaking the budget bank in California. The only thing which has stopped that from happening recently, is the fact that Jerry Brown is termed out, also can actually count, and is willing to veto a remarkable number of bills because he doesn’t care about the political consequences.

Face it: there are huge numbers of people in Republican districts in this state that face the same problems of huge unemployment, poverty, housing inequality and discrimination -- just like Los Angeles does. Wouldn’t it be nice to play better together? Remember, when people from different parties can’t talk to each other and find some rational compromise, the long-term result is like what we see in Washington DC right now.

Well, I think that fiscal responsibility coupled with a progressive social agenda just might be the ticket.  And there’s no guarantee that the democratic supermajority in the Assembly and the Senate will continue forever.

On a personal level, Antonio Villaraigosa is a very articulate, knowledgeable person who genuinely wants everyone to like him. On a governance level, I’m afraid that he simply can’t count. When it was time to cut, the Mayor transferred some 1400 City employee over to the DWP payroll, without so much as an examination process or asking if the DWP wanted this or whether it was permissible under the City Civil Service system and Charter. While the DWP did not officially say anything, guess who appoints the DWP General Manager? Yup, the Mayor. No mention was made that the City’s Pension Plan is separate from the DWP Plan, and who would be on the hook for what.

Then there was his famous ERIP program, short for Early Retirement Incentive Program, to avoid layoffs and incentivize early retirements. You can read the Ordinance here.

Unfortunately, there were two unintended consequences. First, all the seasoned smart employees who could bail out, did, so that there was a giant sucking noise as all the City’s institutional knowledge disappeared. Second, this deal was advertised as “revenue neutral,” which turned out to be a crock. The City’s still paying for it; just ask Jack Humphreville.

And then there’s Herbalife.

For John Chiang, his practical problem is that there’s no way he can match the flash celebrity bigger-than-life personality of his opponents. And voters tend to love their celebrities. On the other hand, maybe this time voters will want to make sure that their governor can balance a budget without tax increases.

If Chiang can get enough name recognition, and get enough people to actually listen to his message, I think voters will give him a chance, and he would be very interesting in a runoff.