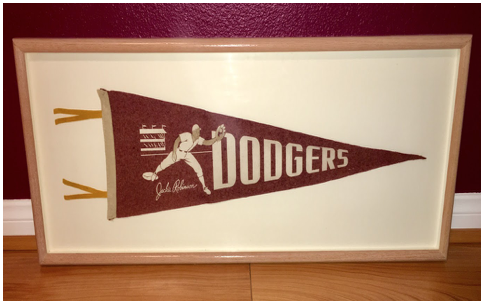 @THE GUSS REPORT-What is the coolest Dodger thing you own? Long before Pawn Stars and Antiques Roadshow made hit television viewing of gems people find, buy or inherit, I stumbled upon a Dodger treasure while shopping one day in the 1970s on an outing with my mom and grandmother.

As a kid obsessed with baseball, but bored on this outing, I was immediately drawn to a stack of pennants sitting on a table in an antique store loaded with long-gone peoples’ possessions.

None of them caught my attention, until half-way down in the stack a gem popped up:  a burgundy-colored flag with an image of none other than Jackie Robinson; it was completely flattened by the pennants below and above it. While sports memorabilia had not yet become a big industry, most anyone could see that this was a real find.

Given that the store was on Long Island, one can assume the pennant dates back to somewhere between 1947 when Jackie Robinson broke into the majors as its first African-American player, and 1957 when the team moved to Los Angeles, making it now between 60 and 70 years old.

A Google search in 2017 shows other versions of the design, but none that match it perfectly since copyright and design standards were probably not as strictly enforced as they are today. For the past several decades, this 50-cent Dodger treasure has safely resided under glass, mounted on acid-free backing in the LA home of this native New Yorker, never to be sold in this lifetime.