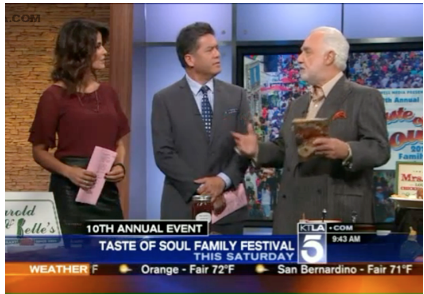 PREVEN REPORT-For months last year, every other word out of LA City Attorney Mike Feuer's mouth was a condemnation of Wells Fargo Bank, but at the Taste of Soul street fair this coming Saturday Wells Fargo's giant logo will appear right beside the seals of the Los Angeles City and County.

It would be so easy for the City Attorney, or the Mayor, or County Supervisor Mark Ridley-Thomas to get Wells Fargo out of the event. Both the city and the county are paying the event's for-profit organizer Danny Bakewell for it's not clear what.

In the case of the county, the sum for a second year in a row is $100,000.  Supervisor Ridley-Thomas' Office says it's a sponsorship fee.

Many would argue that, although the Taste of Soul is overall a great event, celebrating African-American culture with an all-day outdoor food-oriented street fair, for the County of Los Angeles to pay the event's for-profit organizer constitutes a "gift of public funds" and is therefore against the law.

But even if we accept as appropriate the County's (and to a lesser extent the City's) paying of Danny Bakewell in connection with the Taste of Soul event, shouldn't they make their monetary contributions contingent upon Bakewell dropping Wells Fargo as a sponsor? To refuse that action is the height of arrogance and neglect.

How can he say all that while at the same time refusing to make even the smallest effort to get Wells Fargo out of the event?

To the many thousands of Taste of Soul attendees, seeing the Wells Fargo logo side by side with the City and County seals of Los Angeles, cannot help but whitewash Wells Fargo's predatory acts.

Should Wells Fargo be banned from ever again sponsoring a public event? That's not for us to say, but the issue here is whether our elected leaders should pay hundreds of thousands of public dollars to a private operator who's profiting from an endorsement deal with that bank.

If Bakewell refuses to drop Wells Fargo, then when he comes asking our elected leaders for money, they should say "No thanks! We're too busy finishing up our prosecution of -- and possible divestment -- from that same bank."

It's the same sad story again and again. Last month, the County lavished $100 thousand dollars on the private organizer of an Herbalife event. This month it's the organizer of a Wells Fargo sponsored event.

To its credit, after our repeated entreaties, the County announced yesterday that it will conduct an audit of the last two years of the County's subsidizing of the Herbalife-sponsored event.

It's a good step but should be accompanied by immediate action on Wells Fargo.