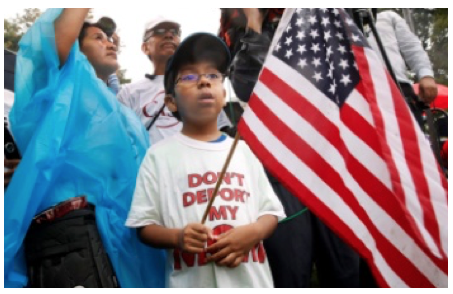 TRUTHDIG-“Refugee Roulette” is the name of the game, and it’s a sure loser for most of the increasing number of unauthorized immigrants being arrested and hauled into court by the Trump administration. They face judges whose decisions amount to a denial of equal justice.

Chance determines which judge an immigrant will face. It could be one who consigns 90 percent of her or his cases to deportation. Or it could be a judge more inclined to permit the immigrant to remain in the United States.

One point is certain: The system ensures that while Donald Trump is in office, his anti-immigrant policy will affect more and more asylum seekers. Employees in the Department of Justice, headed by Attorney General Jeff Sessions, are leading the administration’s assault on immigrants. As Trump, through Sessions, appoints more of these judges, his anti-immigrant hold on policy will tighten.

If you want to understand how Trump immigration policy is shaped, you must dig into the bureaucracy and pay less attention to meaningless political speeches and the babbling on cable news.

The way these judges administer justice was described in a 2007 study, “Refugee Roulette: Disparities in Asylum Adjudication.”  The authors were Jaya Ramji-Nogales of Temple University and Andrew Schoenholtz and Philip G. Schrag of the Georgetown University Law Center.

Their work, published in the Stanford Law Review, remains one of the best studies of this little-noticed facet of the immigration controversy.

The authors quote former U.S. Attorney General and later Supreme Court Justice Robert Jackson (1892-1954) as saying: “It is obviously repugnant to one’s sense of justice that the judgment meted out … should depend in large part on a purely fortuitous circumstance; namely the personality of the particular judge before whom the case happens to come for disposition.”

The Stanford study goes on to say, “Yet in (immigration) asylum cases, which can spell the difference between life and death, the outcome apparently depends in large measure on which government official decides the claim. In many cases, the most important moment in an asylum case is the instant in which a clerk randomly assigns an application to a particular asylum officer or immigration judge.”

A total of 272,581 immigrants will be picked up and issued deportation orders this year, according to the estimate of the Transactional Records Access Clearinghouse (TRAC) at Syracuse University, a nonpartisan compiler of immigration statistics. There are about 11 million immigrants in the United States without documents authorizing them to stay.

The yearly arrests will increase in the future. Part of the increase will come from President Trump’s plan to hire 10,000 more immigration cops. Arrests also will increase if Trump phases out the Deferred Action for Childhood Arrivals (DACA) program, which now protects almost 800,000 young people -- the Dreamers -- from deportation. The Dreamers may well be headed for arrest. In addition, the administration’s Immigration and Customs Enforcement operation is stepping up arrests of immigrants who don’t present the documents needed for residence in the country. Many of them will be arrested in sweeps through courthouses, workplaces, bus and train stations, and places where immigrant day workers gather, waiting for jobs.

After arrest, they go to one of the 58 immigration courts around the country, where they join a backlog of more than 632,000 cases awaiting decisions by immigration judges, according to TRAC. Immigrants can wait more than 680 days for disposition of their cases. Those able to make bail can wait in limbo at home. The rest will wait in detention centers, which are prisons usually run for the government by profit-making companies.

A few weeks ago, I visited the Los Angeles courtroom of Judge Tara Naselow-Nahas. I occasionally visit the immigration courts as part of my effort to report on the fate of immigrants under the Trump administration. It gives me a revealing look inside the immigration bureaucracy. A Metro commuter train takes me to a downtown Los Angeles station. A few blocks away, located in an older high-rise, are the immigration courts. There, every day, immigrants seeking sanctuary await the decision of judges that could mean life in the United States or deportation, often back to a native country where gangs or hostile or corrupt police may await them.

One day, I witnessed a hearing for a woman seeking asylum. That happens when an immigrant claims danger if returned to her or his country of origin.

Immigration courts are open to observers, including reporters. But in asylum cases, reporters are often banned. That’s because the defendants may not want publicity for themselves or those who will appear on their behalf. I am usually kicked out of these hearings. This time, I wasn’t.

Judge Naselow-Nahas ordered her and her children deported to El Salvador but gave her several months to appeal to a higher immigration court.

TRAC compiles statistics on immigration court judges and has been gathering, researching and distributing this data from 1994 through 2016. From 2011 through 2016, according to TRAC, Judge Naselow-Nahas decided 1,014 asylum cases. Of these, she denied 86 percent of immigrants’ pleas for asylum. That’s one of the highest rates of denials on the court. Five judges were ahead of her.

But immigrants were in luck if they landed in front of Los Angeles judges who tended to decide in favor of the immigrants’ pleas for amnesty. The judges with the fewest numbers of denials, according to TRAC, were Stephen L. Sholomson (21.8 percent), David Neumeister (30.1 percent), Joyce A. Bakke Varzandeh (30.4 percent), Maureen S. O’Sullivan (36.7) percent and Gita Vahid-Tehrani (39.6 percent).

Curious about the disparity, I attempted to talk to the judges. I tried a couple, but they declined. I emailed Kathryn Mattingly, assistant press secretary for the immigration courts: “I am working on a story in disparities in the actions of immigration judges in deportation actions. I asked to talk to a couple of the judges, but they said they couldn’t comment. I need the DOJ’s (Department of Justice) side of the story.”

She replied: “Immigration judges do not give interviews. Thanks – Kathryn.” She also said the office in charge of the courts “declines to comment.” She shed no light on the disparity.

TRAC offered an explanation of the difference between Judge Munoz’s 97.1 percent denial rate and Judge Sholomson’s 21.8 percent: “Denial rates reflect in part the differing composition of cases assigned to different immigration judges. For example, being represented in court (by a lawyer) and the nationality of the asylum seeker appear to often impact decision outcome. Decisions also appear to reflect in part the personal perspective the judge brings to the bench.”

The Stanford study offered more reasons for the judicial disparity. Judges with previous experience as government immigration attorneys denied more immigrant applications than those who did not have such work experience. Veterans of nonprofit organizations approved more asylum applications, as did women.

These reasons have a certain logic, but they collapse in the face of the biographies of the judges in the TRAC study. The judge who rejected the most asylum requests, Lorraine Munoz, had been staff attorney for the Legal Aid Foundation, which defends people like immigrants. Before that, she was staff attorney for the Central American Refugee Center.

Or look at the job record of Judge Sholomson, who has the lowest deportation figure in the TRAC reports. He was a veteran government immigration lawyer, serving as an attorney for the Immigration and Naturalization Service from 1970 to 1995, according to TRAC.

Facing a complex legal system that even frustrates lawyers, odds are against the immigrants. Most won’t be able to afford lawyers. The supply of public interest attorneys who represent them without charge is limited. An immigrant without a lawyer is most likely to lose, the TRAC studies show.

More immigrants will be arrested as Trump’s newly hired immigration cops hit the streets. As his immigration judges move into the courts, the number of immigrant-inmates in detention centers will increase with the arrival of newly arrested people awaiting hearings for well over a year at a time in overloaded courts.

As the late British Prime Minister William Gladstone said, “Justice delayed is justice denied.”  In the immigration courts, there is another factor. Immigrants’ fate depends on chance, on the judge who gets picked to hear their cases. Justice by chance is justice denied.

(Bill Boyarsky is a columnist for Truthdig, the Jewish Journal, and LA Observed. This piece was posted first at Truthdig.com.) Photo: Jacquelyn Martin / AP.  Prepped for CityWatch by Linda Abrams.