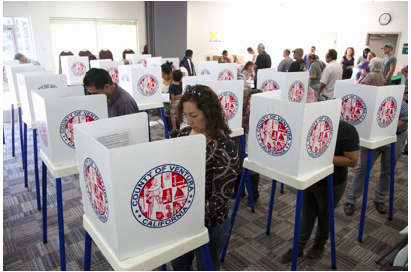 THIS IS WHAT I KNOW--Last week, Gov. Jerry Brown signed into legislation a bill that would move the 2020 presidential primary to March 3, the change likely to become law. The most populous state with the most delegates at stake has held early June primaries from 1946 to 1994.

The date has hopscotched since 1996, moving from the fourth Tuesday to the first Tuesday in March in 2000 and 2004, and as early as February 5 in 2008, with a separate primary for congressional and legislative seats that year, held on June 3.

In runaway races, California’s late to the party primary can mean the die is cast before we even get to the polls. One of the primary reasons party officials in the GOP and Democratic Party have opposed the move is due to cash flow. See, media buys in the Golden State are far more costly than in small to medium-sized markets. That means, for a candidate to succeed here, he or she would need very deep pockets or name recognition.

This move could have great significance for the 2020 presidential election, especially with the names of a pack of California politicos being bandied about on the Democrat side, including Sen. Kamala Harris, Mayor Eric Garcetti, billionaire Tom Steyer, and even a long-shot, Dwayne “The Rock” Johnson.

The change could potentially mix things up on the Republican side, as well, especially for anyone looking to challenge President Trump, who has a fairly strong following among Republican voters in the state – and the state’s GOP primary is closed, which means independents may not participate.

If the bill should become law, the move would not go into effect until 2019 so next year’s midterms would remain in June. However, the earlier primary would apply to down ticket elections beginning in 2019. The earlier primary would place California in line right after the “protected” four – Iowa, New Hampshire, South Carolina, and Nevada.

As of last year, California had 18.2 million registered voters – greater than the population in 46 states. We should have more of an impact on the primary process. The downside is that candidates without cash will be less likely to get in the game here but our voices should not be muffled. There’s a great deal at stake, especially as numerous issues up for grab can potentially impact our state.