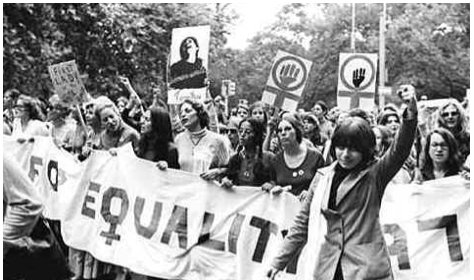 MY TURN-Last month the City of Los Angeles celebrated "Women's Equality Day" and I wondered what century I was living in? I had seen this movie before and I didn't like it the first time! The Equal Rights Amendment (ERA) was proposed as a means to adjust the U.S. Constitution and make gender equality a Constitutional right. It was first introduced to Congress in 1923, although it did not pass. In 1972, it passed both houses in Congress and was submitted to the states for ratification. By 1979, the deadline for ratification, it had been approved by 35 states – but that was three short of the 38 required. 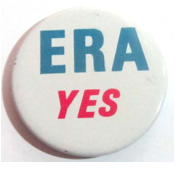 In 1979, I remember wearing my ERA Pin to a mostly male industry event. A group of the industry committee members approached and asked me to remove it because politics should not interfere with an “industry event.”

Of course, I refused and then tried to explain that gender discrimination was not a political but a civil issue. Did I persuade any of them? Of course not, but since I wa s considered one of the "Young Turk-ettes" and was one of the only females on their level, they decided not to press it any further.

But if you had told me in 1979, that in 2017 there would still be a gender gap in which women earn on average 17% less than men for the same job, I might have given up striving for a successful career. After all, I was young, married, had four children and was building a media business in a male world all at the same time. That was more than three strikes against me.

Why, in this supposedly enlightened age, do we still need to be talking about something so moronic? It’s almost embarrassing to write about. Of course, it does give me a soap box issue that's not Fake News.

What sparked my attention and brought back those memories was a news release from Los Angeles City Councilmember Nury Martinez about a proposal she had just submitted to the Council Budget and Finance Committee asking Controller Ron Galperin for detailed gender-based financial data on City Employees.

At the same time, I received a survey from one of my favorite sources, WalletHub, comparing three metrics of female employment in the 50 States. No, California was not in the enlightened top ten. In fact, we ranked number 14 overall.

Before the male section of my readers’ eyes glaze over, I would like to remind you that many of you have daughters, granddaughters and other female relationships – people you care about. Please check the status of women's salaries in your own companies and compare that to what male employees are being paid for the same job. You might be surprised -- and hopefully a little ashamed.

We all know that the entertainment Industry has been notorious for underpaying its female work force, from producers and stars to middle management positions. Entry level positions get starvation wages equally. Silicon Valley, with all its talk of equality, suffers from salary discrepancies for the same or similar work.

Controller Ron Galperin is probably the most transparent Controller we have seen in years and he’s been getting the information that CM Martinez requested.

Here is her motion:

I FURTHER MOVE that the CLA's office prepare an analysis of the city's payroll and identify departmental wage gaps in excess of 5%, as well as recommendations on how to eliminate the overall city gender pay gap, along with any budgetary impacts associated with this. This report should also include an estimate how long it would take to eliminate the city's pay gap.

I am pleased to see that CM Martinez is so much more active in her second term. Maybe it’s because she now has a fellow female councilmember, Monica Rodriguez, to break into the "ol’ boys school" atmosphere. She was a significant voice in the Van Nuys prostitution clean-up and on sex trafficking issues. Let's see what the CLA office does and how quickly they do it, after receiving the information.

The summary of WalletHub survey on this says:

"Unfortunately, the gender gap in 21st century America has only expanded. In 2016, the U.S. failed to place in the top 10 — or even the top 40 — of the World Economic Forum’s ranking of 144 countries based on gender equality. In fact, the U.S. plummeted to 45th position from its previous rank of No. 28.

"The workplace provides perhaps the most potent evidence of the issue. Despite their advances toward social equality, women continue to be disproportionately underrepresented in leadership positions. According to the Center for American Progress, women make up the majority of the population and 49 percent of the college-educated labor force. Yet they constitute “only 25 percent of executive- and senior-level officials and managers, hold only 20 percent of board seats, and are only 6 percent of CEOs. The gaps are even worse for women of color."

"Apart from unequal representation in executive leadership, salary inequity has been central to the gender-gap debate. Few experts dispute an earnings gap between women and men, but there’s disagreement when it comes to the proper method of measuring that disparity. The fact remains, however, that nearly two-thirds of minimum-wage workers across the country are female, according to the National Women’s Law Center. Unfortunately, women still have too few voices in government to help them achieve full social and economic equality in the near future."

WalletHub’s analysts compared the 50 states across 15 key metrics. The data set ranges from the gap between female and male executives to the disparity in unemployment rates for women and men.  You can read the entire report on their website at WalletHub.com. Hawaii ranked number one and Nevada number two as the most equal in the gender gap.

Our fourteenth place was measured on the criteria below.

Various reasons for the disparity have been shouted from the roof top for years: women need to be more aggressive; they shouldn't leave the work force to take care of their families; they need to get more education; etc., etc. ad nauseam. To a certain extent, there may be some truth to all the excuses. It was refreshing to come across an expert in the recruitment field who says we should stop saying that women must change their behavior.

Nick Corodilos, an executive recruiter says that “the fault lies with the employers.” He started headhunting in Silicon Valley in 1979 and has answered over 30,000 questions from the "Ask the Headhunter" community over the past decade. This article appeared on the website of NPR News Hour recently. If you are looking to change jobs, he suggests some interesting and unorthodox practices to help you in the process:

"Too often women get paid less for doing the same jobs as men. And the reason is not what you’re told. Although it seems to elude the media, the experts, pundits and even some women themselves, the real reason is obvious to any forthright business person: Employers pay women less, because they can get away with it.

"Worse, the same pundits tell women that it’s their problem and that they must change their behavior if they want to be paid fairly for doing the same work as men. But the experts, researchers, advocates and apologists are all wrong. There is no prescription for underpaid women to get paid more, because it isn’t women’s behavior that’s the problem.

"There is only one thing a woman should have to do to get paid as much as a man: her job!

"When doing the job doesn’t pay off, women of all ages should be aware of what younger women today are doing to fight back. According to a recent study by the International Consortium for Executive Development Research, some women have figured it out. Millennial women (18-32) don’t need instructions to change their negotiating, child rearing, educational or any other behavior to impress errant employers. They know to quit and move on. It’s going to be the new trend.”

He has a simple fix. Companies should give a prospective employee a salary summary of what people get paid in their companies. That way everyone knows what everyone is making in that position. If there are seniority perks, they should also be spelled out.

The United Kingdom has passed such a law for large companies starting in 2018. Recently, BBC published its salary structure and, surprisingly, women there are making at least ten percent less than their male counterparts. They hope to attain parity by 2020. Making it public might be the incentive they need to achieve that goal.

At the rate we are going, there may soon be a rule that women can't wear pants to work and mothers will be advising their daughters to learn shorthand. We seem to be regressing and I wonder if there are enough women out there to RESIST.