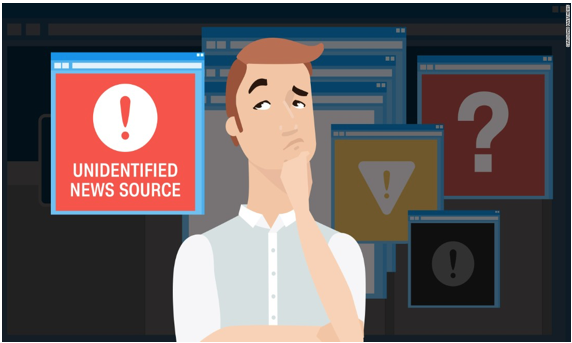 MY TURN-Continuing my quest to identify and combat fake news has become almost an obsession. I have spent hours tracking down a ton of fake news sites. Some of them are so disgusting that when I finished, I needed to take a shower!

Fortunately, I was asked by Leon Williams, who hosts a monthly "salon" called "Conversations with Leon," to lead a discussion on the topic of Fake News. And since I hardly ever turn down a chance to give my opinions to a live crowd, I accepted.

I ended up with my own focus group and was given permission to share with you their comments, along with my take on our evening together. The small group was a cross section of mature and knowledgeable adults. Williams has been holding his salons for several years, discussing a different subject each month.

There was a fair division between those in favor of President Trump and those against. Some voices were raised but no one came to blows. I did note that, with a few exceptions, it was the men who favored Trump, his persona and agenda and the women who did not. (This concurs with professional polls.) Were any minds changed? Probably not.

Many of these sites have used well-known names like ABCNEWS.com or USATODAY.com and added a “co” after the com. They sometimes use similar logos to emulate the style but certainly not the substance of the original authorized sites. Some like Breitbart intersperse real news with their "opinion pieces.” I think, in the long run, they all have delusions of grandeur but we will see.

I read to my audience my list of sites that exaggerate or spin and sometimes fictionalize the truth on both sides. Infowars, VOAT, and Drudge Report are probably the best known conservative sites. Occupy Democrats, BiPartisan Report, American News and Daily News Bin are liberal spinners. I am amazed how many people share information from these sites on Facebook. They really believe the information is real.

This group was not afraid to speak up and, for the most part, they were very knowledgeable on both sides. I was asked if I could name a conservative commentator and I replied Chris Wallace. That caused an immediate backlash. "He isn't a real conservative,” someone in the group said who thought Sean Hannity was the "only truth teller" on TV.

I gave them an example of fake news containing half-truths: the recent "legal letter" sent to our Secretary of State, Alex Padilla, by the self-righteous group, Judicial Watch. It concerns the millions of ineligible voters on the rolls in California. They discovered that in 11 counties there were more registered voters than citizens of voting age compared to the population and accused California of violating Section 8 of the National Registration Act, 52 U.S.C. 20507.

They, along with the Election Integrity Project California, a registered non-profit corporation, demanded that each of the counties communicate in writing the steps they were taking to curtail these egregious problems.

I will not go into the six pages of the letter. However, I discovered that currently, 24.9 million of California's 39 million residents are judged legally eligible to vote and 19.4 million – or 77.9% -- are registered. Registration in individual counties range from a low of 58.68% in Merced County to 88.28% in Marin County. Judicial Watch came up with 11 counties they said had more than 100% of their eligible populations on the voter rolls. But they included those counties’ "inactive voters" (names of those who have voted sometime in the past but have been dropped from current registration rolls), carelessly branding them as “registered voters.”

However, those inactive voters are only names -- about 5 million statewide -- and any of them who seek to vote again, must prove their eligibility and, in effect, reregister. Most are no longer living in the counties where they once voted, which explains why adding registered voters and inactive voters together could total more than 100%.

Remember, when the President talked about this it was discovered that both his son-in-law and Steve Bannon were registered in two states. The problem occurs when someone tries to vote in two different states for the same election. Just being registered is not a crime.

The question was asked, "How do we determine what is the truth?" I pointed to some excellent sites that do nothing but "fact-check."  When I named Snopes there was a loud laugh and a cry of "liberal fact check.” Other fact checkers that are considered non-partisan are: factcheck.org, opensecrets.org, and PoliFact. Reputable media include BBC, Reuters, AP and our leading newspapers.

It was a fun and stimulating evening and no one berated or insulted me. I concluded by saying that maybe the silver lining in all of this is that ordinary citizens are getting involved. I would love to see more of this kind of give and take being done in a civilized manner. It’s important that people are not cut off and are given a chance to express their opinions. Also, you can't expect change unless you vote and you can't complain if you don't vote.

I heard that the reviews of my “salon talk” were pretty good. And I’ve even been invited back!

There are some other issues I didn't get a chance to share with the group. Many websites hide their ownership. One of the founders of a large secret web presence is a company called "Disinformedia," which has more than a hundred domain name sites.

The owner, Jestin Coler, agreed to an interview with NPR. He explained that the purpose of starting his fake news empire in 2013 was to "highlight the extremism of the white nationalist alt-right.” He said the whole idea from the start was to build sites that could infiltrate the alt-right’s echo chambers. He wanted to publish blatantly false or fictional stories about their conspiracy theories and then publicly denounce those stories, revealing that they were fiction. He admitted that along with the financial incentive he loved messing with people's minds.

Each time I think I've finished investigating the subject of "Fake News" I find another link to some other information outlet. So, what does all this mean? For me, fake news is outright lies. And for some it is the sin of omission. Others see a kernel of truth in fake news. And some think it’s news they don't like. When our Mayor talks about the success of some of his pet projects, but fails to mention promises made but not kept…is that Fake News?

I would be interested in hearing from readers who see examples of fake news here in Los Angeles. We’ll check it out!