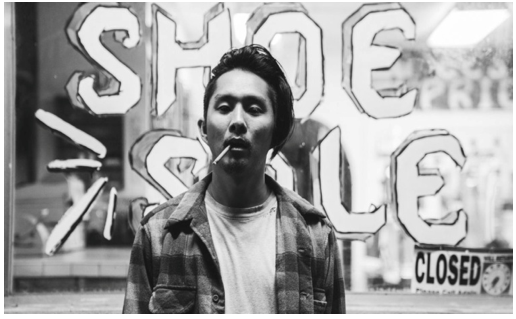 LOS ANGELES--Though the beating of Rodney King that sparked the 1992 Los Angeles riots occurred in the Northwest Valley, the epicenter of the civil unrest that followed was South Central, a region southwest of downtown LA. In the 25 years since, South Central has proven to be a popular backdrop for movies that look at the implications of the riots: Straight Outta Compton and Menace II Society are both set in a tense post-Rodney King South Central, while documentaries including Rize and Burn Motherf*cker, Burn! focus, to some degree, on civil unrest in the area's neighborhoods. (Photo above: Gook star, writer, and director Justin Chon.)

In this canon, Korean Americans' role in the LA riots has rarely been a topic of exploration. And that's leaving out a major part of the story, as Koreatown fielded protestors and rampant looting during the events. Gook, a new movie arriving in theaters today, is one of few films to delve into this experience. (It's not the first though; Wet Sand: Voices from LA and the short film April's Way preceded it.)

The third film from writer, actor, and director Justin Chon, Gook centers on two Korean-American brothers, Eli (Chon) and Daniel (David So), who are struggling to keep their late father's shoe store afloat in Paramount, California, a city of 50,000 that lies to the east of Compton.

Though roving groups of black and Latino teenagers call them racial slurs on Paramount's streets, and jump both over the course of the film, the brothers have a friend in Kamilla (Simone Baker), a black 11-year-old girl who prefers to work in their store to going to class. But when Kamilla's brother Keith (Curtiss Cook Jr.) finds out she's been spending time with them as the riots start to break out, he plans to come to the store to confront them. Keith has some history with Eli and Daniel's father, and he's ready to use the city's mayhem as a cover to get even.

Viewers might recognize Chon best for playing Eric Yorkie in the Twilight series, or Jeff Chang in 21 and Over. But he's been quietly building up a directorial oeuvre over the last few years as well, helming the shorts You're Stoopid and Full Circle, and the feature comedy Man Up, in which he also starred. And Chon has a personal connection to the LA riots: His father owned a shoe warehouse in Paramount that was looted; it was a formative event for Chon, one he says convinced him that he had an important story to tell.

We chatted with Chon about Korean Americans' role in the riot, the film's take on intergenerational conflict, and why he chose to name his film after a racial slur.

Tell me a little bit about how this movie got started for you.

My dad owned a shoe wholesale warehouse in Paramount when the riots were happening. We got looted during the last day, so it's an event that we had a very personal connection to, and affected our family.

During the last 15 years or so since I've been acting, I've auditioned for a few LA riot movies, and never thought about making my own. But about five years ago I started to think, "I think I have an interesting take on the events." I started developing it and thinking about it, but the reality is, films with Asian-American male leads and African-American female leads are very hard to get financed, so I didn't know how realistic it was. But then what really kicked me into gear was that I found out about a few other projects that were going to tackle the riots and I just didn't felt like they accurately or authentically portrayed the actual Korean experience. It was sort of like a wake-up call that like, if I don't do this now, our voice will be lost and we won't really be a part of the conversation.

Something that struck me about this film was that we've seen the LA riots revisited in so many ways, but usually Korean-American characters are side characters, like portrayed on the roofs with guns protecting their stores.

Those other films are great, they talk about the issues, but it becomes mostly a black and a white situation, which is great, let's talk about that, but financially Koreans were the hardest hit by the riots. Also, we're not humanized in the process. It's either like a very clichéd sort of Asian, generic portrayal and I just don't think that's accurate of the American experience, I think it's much more than that.

Speaking of the shades of gray that your film covers, the protagonists of your film aren't just at odds with the guys in the neighborhood who pick on them for being Asian, but also Mr. Kim, the Korean storeowner across the street. Can you talk a little bit about the thinking behind the intergenerational Korean conflict in the movie?

We're talking about race and conflict, but I wanted to show that, just because you're Mexican and you're black, and I'm Korean, that we don't all get along on each side of our [respective] lines. Even among ourselves, we're fighting all day. There's this huge disconnect [for instance] between the parents that immigrated here and the children that are born here. The children that are born here, we're essentially Americans—but they are still of the old country's mindset and there are huge discrepancies in everyday life that I think are such huge identity issues for immigrants. At the end of the day, it's like, "Hey, it's not all rosy over here either."

I'm curious about why it was important to you to incorporate a child's perspective on the riots, in the form of your character Kamilla.

I was 11 during the riots and she's also 11, so there are some direct parallels there. Also, when you're dealing with things that are so heavy: How do the kids see it? An undeniable aspect of being a child is that there's this innocence and resilience and positivity that a lot of kids have and adults don't have anymore because they're just beaten down by the world. Kamilla's really important because there are two communities [in the film] that really are at odds, and here's this girl who's kind of a bridge, and she's not afraid, or prejudiced. She can be a part of both [communities].

Ultimately it takes her death for everybody to wake up and realize that they should have talked to one another and listened to one another. At the end of the day, when her life is in danger, who cares about anything else? What they're squabbling about, it's inconsequential compared to her life.

Another thing is, the title of the film is Gook, which, as some of us know, is a racial slur. But a lot of younger people don't even know what that means, which is a dilemma: Is it a good thing that they don't know, or do we need to know our history as Asian Americans and that's not something we should forget because it's hurt a lot of people? So in that pivotal moment when Kamilla asks, "What does that mean?" Eli has this choice: Does he perpetuate the cycle of hate by teaching her the racial-slur version of that word, or does he decide to keep her innocence by telling her the literal definition? Because the origin of that word, it actually means "country" in Korean.

When American G.I.s would come to Korea, they would say, "miguk," and that means "America." So it's an opportunity to educate. You need a child to bring this up with such innocence, and be able to talk about it in that way.

We've just passed the 25th anniversary of the LA riots. What do you hope people reflect on most when they remember the riots this year, and especially as they view your film?

I think 25 years is a good amount of time to reflect. In terms of police brutality—if you don't live under a rock, it's definitely still an issue, and I don't know if it's gotten better at all. In terms of race relations, the purpose of making this film is that I really try not to be preachy, and I really try not to take sides. It's just a story that I've told, and people can choose to feel what they want, but I hope, with that being the backdrop 25 years ago, that it sparks conversation so that people can talk honestly about things.

And face them head-on: I think it's great that we're so sensitive, but we shouldn't shy away from talking about real issues. So I hope that's [clear] in my film. This film is obviously through the lens of an Asian American and I hope that we can talk about race openly and hopefully gain more understanding about one another because this country is only going to get more diverse.

(Katie Kilkenny is an associate editor at Pacific Standard, … where this piece originated. She was previously at The Atlantic, where she was an editorial fellow on the culture channel.)