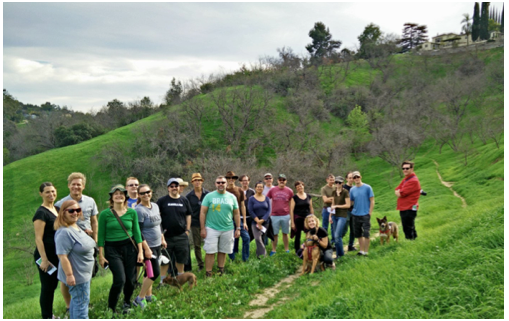 EASTSIDER-When last we visited Walnut Canyon in February, the question was whether there could be a deal with Abode at Glassell Park.  As we shall see in this update, so much for rationality.

It’s now into August with no deal in sight, so the open space folks have laid down the gauntlet in what amounts to a guerrilla war against the builders. Specifically, the GPIA (Glassell Park Improvement Association) has taken up the mantle of those who want an open space preserve, or Park, instead of the 32 homes builder Abode at Glassell Park intends to build and sell. They did this by incorporating the Friends of Walnut Canyon as a GPIA Committee.

Wow! At least 100 folks showed up at 10 a.m. for a Saturday meeting. (The Fire Marshall set 100 as the maximum building capacity.) Eric Tallman, President of the GPIA, led off with a history of how they became involved with NELA Greenspace and Friends of Walnut Canyon. Susan Olson Davis, who heads the Friends of Walnut Canyon Committee, gave an overview of their activities and how all these groups fit together. Each one did a great job.

As Eric pointed out, this uniting of many community members who are concerned about open space has brought neighbors together in search of a common goal. The resulting neighborhood cohesion will stand us in good stead for future issues.

Clare Marter Kenyon was the guest speaker, covering various land wars in Northeast LA over the last 20 years or so, ones in which she was instrumental in getting pushed through open space projects such as Elyria Canyon Park, Rainbow Canyon Park and Elephant Hill.

Among her achievements was, along with Helene Schpak and others, getting a Northeast LA Interim Control Ordinance passed. This was during the reign of Reyes, Huizar and Council President Garcetti, when the Council used a variety of tools to essentially block all development in our hillsides, including single family homes on lots owned by individuals.

Another major achievement was Clare’s interest in North East Trees. This resulted in getting these same politicians to pass an LA City ordinance in 2006 adding the Southern California black walnut, the California bay laurel, and the Western sycamore trees to the endangered species list. Not to mention an expansion to cover all oak trees except for the scrub oak.

Having been her opponent at a time when I wanted to build a single-family home on the hillside, I can personally attest to the efficacy of this group. We sold our lot, cheap.

The addition of formerly non-endangered trees, combined with a wickedly complex enforcement mechanism, provided a major stumbling block for developers to get through the planning process and build on our hillsides. Funny how life changed and now PLUM Committee Chair Huizar has never met a development he won’t ram through his Committee (or a billboard, for that matter.) 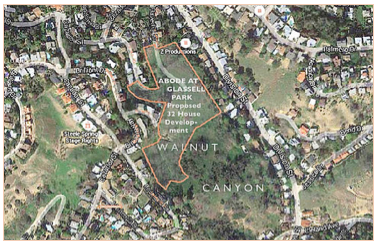 Probably the key speaker at this meeting was Dean Wallraff, a prominent CEQA attorney now on retainer to the Friends of Walnut Canyon. Dean is the real deal and serves as the Executive Director of Advocates for the Environment, a very active public-interest environmental organization.

Looming large among his achievements has been the CEQA litigation over the Santa Clara River and its more well-known proposed Newhall Ranch Development.

As Dean explained, CEQA is a developer’s nightmare, since it is an iterative process which can go on forever in a merry-go-round of EIR’s (Environmental Impact Reports), comments to the proposed Report, Revised EIR’s, comments to the revised Report, etc. until there is a final EIR which gets adopted by the City.

And even then, as soon as there is a final exhaustion of administrative remedies, the lawyers are off to court, with the very real possibility that the EIR will be sent back by the court for further revisions.  While all this is going on, a developer proceeds at his own risk since the Court can send the project back to the drawing board at any time for more revisions.

This is the best bet the open space people have available to tank the Abode project. If you look at Wallraff’s track record with the Newhall development, he can probably tie this project in knots for at least four or five years.

Friends of Walnut Canyon have hired the best in Dean, and it surely must give some pause to the developers. I suspect we will be invited to contribute to funding the CEQA challenges ahead, and if you want to give now, you can go to the GPIA website and look for Friends of Walnut Canyon Committee. They have a ­lot of information about the project, the canyon, and other resources. It’s worth a look.

As I noted in my earlier article, this project consists of 32 homes which will be built on 32 individual lots within a 4-acre chunk of the 30-acre plus Walnut Canyon. Truth be told, the owners ultimately have an absolute right to build on these lots – and this is what is freaking out the Friends of Walnut Canyon.

A project of TKGY group, you can get a peek at it here.

From the standpoint of the developers, the payoff for this deal could be very lucrative indeed. According to real estate friends of mine, these 32 homes could go for around $1.5 million each, under today’s market conditions. You can understand why the developer isn’t interested in selling the project for land value.

But here’s the crap shoot: against that kind of a purchase price, you have to get through the City planning process (read EIR’s and CEQA), risk litigation, get a construction loan, risk all kinds of harassment/lawsuits over the precarious haul routes, complete construction, and still hope that the market is there when you’re done.

Even after the 3-5 years of fighting over CEQA, assuming you get a final approval from City Planning and the Council, the construction loan is still a killer. Basically, every developer, from Mitch O’Farrell’s skyscrapers to a single spec home, is at the mercy of everything once the loan is obtained. If they can’t meet the time frames of the loan and sell the project before the loan is due, most developers simply don’t have the financial resources to pay it off. Then they are at the mercy of the financial services industry who make LA gangs and dope dealers look like candy salesmen.

For further evidence that this game is not for the faint of heart, let’s look at the total time frame for the developer. Say, five years at the outside with environmental litigation, and then another eighteen months to two years after you get your construction loan. Will there still be a market for your houses at $1.5 million or more? If there’s another housing market crash, you’re probably toast.

Speaking as a mediator, the logical area of discussion between Friends of Walnut Canyon and the Abode at Glassell Park should be, what profits the developer sees at the end of the rainbow vs. the length of time and risk involved in proceeding. Of course, we mediators always think there’s a pony in there somewhere.

I was puzzled when everyone at the meeting insisted that the person responsible for fixing this dispute and making everything better, is Gil Cedillo, recently re-elected to Council District 1. I understand that he is the key player in terms of any final City approval of an EIR and a permit to build, but there are a lot of other people who have or should have a piece of this action.

I say this for two reasons. First, the City Council doesn’t have a great track record in doing open space land deals. A prime example would be the deal on Elephant Hill, which was essentially a $9 million debacle created by Jose Huizar. His meddling got the City sued, even as he declared victory  (while we taxpayers paid the $9.2 million) and then turned around and gave a large chunk to the SMCC for $500,000. While the open space folks were happy, the taxpayers got hosed. You can read about Elephant Hill here.  Jack Humphreville would be proud.

The second reason that Cedillo and the City can’t do this alone is that Walnut Canyon is a big project.  Abode at Glassell Park represents only four of the total 30 acres. The rest is out there in a very few large parcels, and Abode doesn’t touch the rest of what would be the totality of a desired Park. That’s big bucks.

For this ultimate goal, we need the big guns in addition to Cedillo, who would never get the money out of LA City’s budget process. People like County Supervisor Hilda Solis, state politicians like Senator Kevin de Leon and whomever replaces Jimmy Gomez in Assembly District 51, and organizations like Trust for the Public Lands, and the Santa Monica Mountains Conservancy (who are pretty good at finding money themselves.) And there’s the possibility of a Bond.  Hey, a State Park would be cool.

The next step seems to be a Community Meeting with the developers of Abode at Glassell Park. I am told that such a meeting is anticipated within the next couple of months.

Cross your fingers and stay tuned.