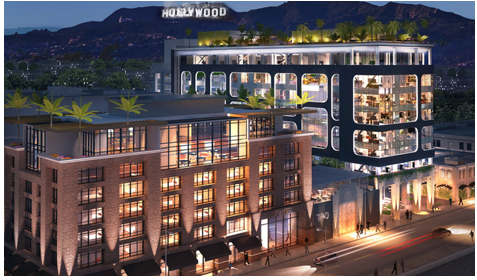 LIVING THE DREAM-When one thinks about the visionaries who made Hollywood what it is today, there are a lot of candidates to consider: Sid Grauman who dreamed up the picture palaces and movie premieres; C.E. Toberman, who built most of the grand buildings on Hollywood Blvd. and made the Hollywood Bowl a reality; the Chandler family and their associates who put the huge Hollywood Sign on Mt. Lee; Johnny Grant, who built the Hollywood Walk of Fame into an international icon. The list could go on and on.

And in fact, the list continues to grow. Last week, the long-awaited Dream Hotel opened its doors -- the culmination of the 10-year dream of Richard Heyman and Grant King of the Relevant Group. These two gentlemen looked at a very nondescript stretch of Selma Avenue just west of Cahuenga and imagined something no one else saw -- a thriving entertainment complex.

Their original vision was to convert an old industrial building into a hotel and to activate the adjacent derelict alley with restaurants. Over the years, that vision grew. They now envision up to four hotels within a two-block area. This is a case study in "place-making" if ever there was one. The two partners envision a vibrant neighborhood something akin to the Meat Packing District in New York. Looking at what they have already created, we can only imagine what another three hotels might do for that neighborhood.

What is especially noteworthy is that the new hotel and the four adjacent restaurants have created 700 jobs. That is significant in a stretch where the previous structure on the site probably provided less than 10 jobs. Not only do the venues provide employment, but they will also offer new entertainment opportunities for Hollywood residents, and will act as a magnet, drawing guests from throughout Los Angeles. It will help to perpetuate Hollywood's image as the entertainment center of Los Angeles.

If you talk with Grant and Richard, they will tell you of the many challenges they faced to make their dream a reality. When they couldn't get financing locally for the project, Grant went to China where he successfully raised the needed funding.

They simply did not take "no" for an answer. They wanted to bring the "A-game" to Hollywood, and they did. Besides Dream Hotels, they brought in the Tao Group, one of the most successful restaurant groups in the nation. These unique restaurants in the Dream Hotel complex are already receiving rave reviews, so be sure to check out Tao, The Highlight Room, Beauty & Essex, and Luchini.

When you visit the Dream, you will agree that it will be catalytic not only for that stretch of Selma Avenue, but for Hollywood in general. This type of project perpetuates the excitement about the revitalization of Hollywood. I often speak with developers who remark that they can feel the energy here and that they want to be part of it. They have heard through word of mouth that things are happening in Hollywood. When they come to visit, they experience it.

Hollywood did not become the name synonymous with the film industry by thinking small. It has always been associated with "dreamers" -- but dreamers who made things happen.

As the Hollywood Chamber of Commerce, we congratulate Richard and Grant on their success and express our appreciation for their faith in Hollywood. We can hardly wait to see their next project.

(Leron Gubler has been serving as the President and CEO of the Hollywood Chamber of Commerce for the past 24 years. His tenure since 1992 continues to oversee the great comeback story of Hollywood.) Prepped for CityWatch by Linda Abrams-cw