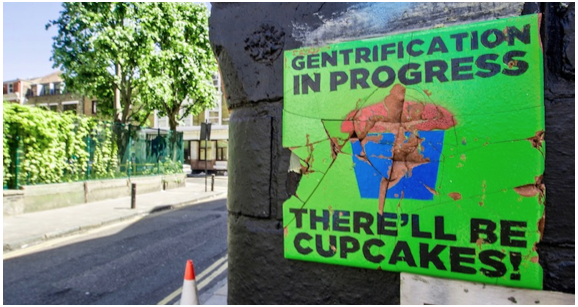 Serving a largely African American clientele for decades, Baldwin Hills Crenshaw Plaza may become a sad symbol of a gentrification crisis that’s sweeping across Los Angeles — from the Eastside to the Valley to Hollywood to Venice.

In LA, developers of mega-projects routinely ask City Hall politicians to disregard zoning rules, which protect residents from displacement and gentrification, and hand over a General Plan amendment or zone change or height district change. That’s known as spot zoning. It generates millions in profits for a developer like Capri Capital Partners.

South LA residents have long sought more development in their middle- to lower-income neighborhoods, but development that caters to their needs — such as quality affordable housing and retail stores and supermarkets with reasonable prices. The luxury redevelopment of Baldwin Hills Crenshaw Plaza, which will include high-end retail and restaurants, is not such a project. It is being built for affluent professionals.

The mega-project, which the media often compares to billionaire developer Rick Caruso’s upscale Americana, is one of three luxury developments in the pipeline for South LA.

Three miles to the northwest of Baldwin Hills Crenshaw Plaza, the City Council and Mayor Eric Garcetti approved the Cumulus luxury mega-project in West Adams at Jefferson and La Cienega boulevards. Five miles to the northeast, the City Council and Garcetti approved The Reef luxury mega-project in Historic South-Central.  Both mega-projects, which received spot-zoning favors, are also catering to the needs of affluent professionals, not longtime residents in those neighborhoods.

If City Hall hands over spot-zoning favors to Capri Capital Partners, it will create a kind of “gentrification triangle” in South Los Angeles, where the population is overwhelmingly African American and Latino. Lower- and middle-income residents and mom-and-pop shops will feel the worst impacts.

Crenshaw Subway Coalition Executive Director Damien Goodmon said, “No one here can afford these [housing] units… It is not for us if we cannot afford it.”

He asked the packed meeting, filled with South LA residents, if anyone was making $100,000 or more — an annual salary one needs to buy or rent market-rate housing and not be economically overburdened. No one raised a hand.

The Garcetti-appointed planning commissioners, however, spent no time discussing gentrification and displacement. Instead, they talked about improving the landscaping for parking islands.

Having an opportunity to request a sizable number of affordable housing units, City Planning Commission President David Ambroz and his colleagues whiffed. They merely sought five percent workforce housing and five percent affordable housing for the 551 condominiums (55 units total) and the same formula for the 410 apartments (41 units). That’s an underwhelming 96 units out of 961 condos and apartments.

The planning commission has a disturbing track record of seeking a minimal amount of affordable housing from developers building luxury mega-projects.

Shockingly, Capri Capital Partners did not include affordable housing in the project’s filing with the city. Equally shocking, City Council members Herb Wesson and Marqueece Harris-Dawson, who represent the area, didn’t demand its inclusion — powerful council members and their staff work closely with developers throughout the approval process, hashing out such details as the number of affordable units.

At the planning commission meeting, Quintin Primo, CEO of Capri Capital Partners, reasoned there was already a “disproportionate amount of affordable housing” in the community. With LA facing a widely acknowledged affordable housing crisis — as well as a homeless “state of emergency” that was declared by Mayor Eric Garcetti and the City Council in 2015 — the planning commission didn’t see it that way.

Even if Primo’s absurd remark was true, the nearby neighborhood won’t be affordable for long — apartment rents and housing prices in the community will certainly rise once the developer’s luxury mega-project is built.

Capri Capital Partners padded the meeting with a large number of supporters — a regular ploy used by developers. They talked about good construction jobs and better shopping. They did not ask, however, at what long-term cost to the community. And once lower- and middle-income residents are displaced and a neighborhood gentrifies, only the affluent can move in.

(Patrick Range McDonald is website editor and senior researcher at Coalition to Preserve LA.) Prepped for CityWatch by Linda Abrams.