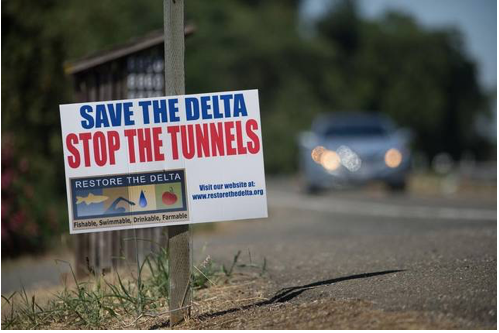 VOICES--Many Californians have fond memories of landing their first decent-paying job, working long hours to save enough for a down payment, and finally buying a family home. Many of us poured our weekends and hearts into repairing beautiful old houses.

Now imagine, after years of paying your mortgage, raising your family, and upgrading your property, that the state government chooses your neighborhood to become a vast industrial site--for more than a decade.

This is the living nightmare that Governor Jerry Brown’s Delta Tunnels proposal would create for my neighborhood in Stockton, on the eastern side of San Francisco Bay-Delta estuary.

In June the United States Fish and Wildlife Service (USFWS) and National Oceanic and Atmospheric Administration (NOAA) issued a “no jeopardy” ruling on the construction of the tunnels, despite an estimated 40,000 construction trucks producing diesel emissions equal to putting six hundred thousand new cars on the road. Once the state government uses eminent domain to seize properties for the proposed Delta Tunnels, Bay-Delta residents will be living with around-the-clock noise and pollution for 14 years if there are no construction delays.

Moreover, the biological opinion only accounts for the construction of the tunnels, neglecting to address the impacts of increased water diversion during operation on endangered species and wildlife that rely on the Delta ecosystem for survival.

After the Tunnels are built, many of the 4 million residents of the Delta, Stockton, San Joaquin County, Antioch, and Contra Costa County will be left with drinking water that won’t meet Clean Water Act standards—that is if the 2015 Clean Water Rule survives the Trump Administration’s recent proposal to repeal it. Increased water diversion will bring more saltwater further east into the Delta from the San Francisco Bay, further threatening the health of the Delta’s people, native and migratory species, and agricultural sector. The losses of my community will continue to line the pockets of corporate interests in the Central Valley and Southern California despite

Though Californians rejected a Peripheral Canal proposal in 1982, this time there will not be a clean vote of the people. Project approval will be handed to the Delta Stewardship Council whose members are mostly appointed by the Governor. The special interest water districts making up the Joint Powers Authority will approve a financial plan that has urban ratepayers subsidizing corporate agriculture, including Stewart Resnick’s Wonderful Company.

Four wholesale water districts: Santa Clara Valley Water District, Metropolitan Water District of Southern California, Westlands Water District, and Kern County Water Agency will have control over a significant portion of California’s water. California residents will have no say in how much that water costs, or if their neighborhood receives its fair share for the money it spends. Through the participation of Metropolitan Water District of Southern California, Southland homeowners will pay an extra $9000 per household over 40 years and will receive no additional water. In fact, the Delta Tunnels may become a very expensive stranded asset.

My home, my community, the magnificent, picturesque estuary that I love, is tied directly to the health and wealth of your community. Our middle-class businesses will falter, and our poor people will suffer when water is taken out of the estuary. In Southern California, middle-class businesses and your poor people will suffer when the $17 billion bill comes due. The only upside is for Big Agriculture, largely growing crops for export to Asia.

Instead of this expensive gamble on one massive construction project, let’s instead invest in the hundreds of underfunded local water projects that are proven to build California’s water sustainability and create good paying, long-term, local jobs throughout the state.

(Barbara Barrigan-Parrilla is executive director of Restore the Delta. She lives in Stockton, California.)