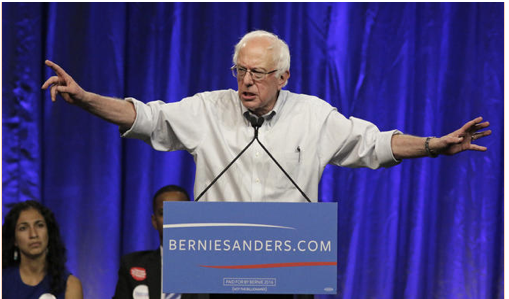 THE COHEN COLUMN--The Senate Republicans were going to quick-fix their massive tax cut for the rich, pretending to be a health care bill, which the independent Congressional Budget Office slammed worse than the House bill. Then they ducked out of town one day early.

Now they're all afraid of making any public appearances during the congressional recess lest their constituents chew them out something awful.

But we'll tell you who we really need to get to over the holiday, Bernie Sanders, and bear with me for a second while we explain why.

We agree with Bernie on policy pretty much up and down the line. But we have a very strong TACTICAL disagreement with him and it is this:

Bernie has been saying he will be bringing forward a new single payer Medicare For All bill. But listen to Bernie's explanation as to why he has not already done it … the votes to pass it are not yet
there in Congress.

Bernie, we're talking to you, bro. This one you've got exactly backwards.

The ONLY way to get the people elected who will cast those votes to pass single payer is by running candidates on the platform of promising to cast those votes, and holding them to it.

And that starts by having all current Democratic politicians stand up now, to support passage of single payer, and THAT starts with YOU, Bernie, NOW, introducing your new bill and calling on all other members of your caucus to join you in sponsoring it. Put them all on the spot, Bernie, for us.

Every person Bernie encounters must pound him on this message.

Bernie, you put yourself forward to be leader of our whole nation, and the free world. Demonstrate your national leadership now, Bernie. Introduce your single payer bill now.

There is a huge leadership vacuum in America right now on health care. The Republicans are incapable of passing what they want for their rich special interests without massive negative fallout in the 2018 elections. So-called Obamacare is breaking down just as it was designed to do.

Now, right now this instant, is the time to really push hard for single payer Medicare for all.

And that starts with YOU and your own personal activism. Do it now. Lean on your members of Congress. Indeed, starting with Bernie himself.

And always remember, the most important contribution each of us can make is to keep speaking out and to encourage everyone else you know to do the same.

And the answer is always:  VOTE