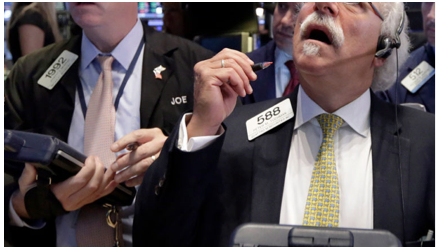 PENSION BRINKMANSHIP-Governor Brown’s proposal to fund CalPERS with borrowed money parallels a similar move by Puerto Rico in 2008. Borrowing to meet pension obligations can work under certain circumstances, but it is a risky policy. It backfired in Puerto Rico and can do so here.

Last month, the Commonwealth of Puerto Rico filed for bankruptcy in federal court. The island’s government is unable to service $70 billion in bonds and almost $50 billion in pension debt. The bankruptcy filing – the largest ever by a U.S. government unit – was just the latest chapter in a fiscal crisis decades in the making.

In 2008, Puerto Rico opted to plug a hole in its retirement system funding by issuing Pension Obligation Bonds (POBs). The Commonwealth borrowed $3 billion from bond investors to contribute to its Employees Retirement System (ERS), Puerto Rico’s analog to CalPERS.

Puerto Rico’s timing could not have been much worse. Between early 2008 and early 2009, the Dow Jones Industrial Average declined by about 50%.

ERS disclosures do not allow us to see precisely how poorly the investments purchased with the POB money performed, but we do know that the total value of the system’s assets fell from $5.77 billion on June 30, 2008 to $5.07 billion on June 30, 2009 – a decline of about 15%. One saving grace for ERS is that a lot of its assets were held in cash or cash equivalents. That is usually a bad practice for a pension fund investing for the long term, but it worked in this case.

During the same fiscal year, CalPERS suffered a loss of 24%. Had the state borrowed $6 billion (the amount recently proposed by Brown) to invest in CalPERS in June 2008, almost $1.5 billion of that would have been wiped out. It would take several years of above-average returns to make up for such a large loss.

Given this history, a reasonable question to ask is whether a 2008-style market crash could happen again in the near future. Since 2009, an eight-year bull market has more than trebled stock valuations, increasing the risk of a major drop. In 2016, our own Ed Ring argued that stock prices were quite high by historical standards, and that it was reasonable to expect a 47% correction.

Since Ring’s piece appeared, the market has continued to rally, largely in response to Donald Trump’s election. The market seems to be expecting tax cuts and deregulatory policies that will stimulate growth. But with the Trump administration facing stiff resistance from Democrats, some Republicans and just about all of the mainstream media, it is increasingly possible that the anticipated policies will never materialize.

Whether it is a Trump administration meltdown, a collapse of the Silicon Valley bubble or a shock from overseas, history suggests that some event will trigger a downturn sooner rather than later. Even Jerry Brown seems worried. In his May 11 budget press conference, the governor told reporters, “We’ve got ongoing pressures from Washington and the economic recovery – it’s not going to last forever. In California, we don’t live in [a] fixed world of straight-line revenues that keep rising and never go down.”

Brown’s comments refer to the state’s revenue volatility. California’s tax system is heavily dependent on revenue from capital gains taxes as well as personal income taxes on high earners, whose salaries rise and fall with the market. As a result, the state’s revenue swings widely with the economy. This is also the case with some expenditures, like public assistance, unemployment benefits and, especially, Medi-Cal.

So if we have a recession and bear market, the state will lose money on its CalPERS investment just as it starts running large deficits. And that could pose an additional problem. While Puerto Rico’s pension borrowing took the form of bonds, Brown is planning to borrow California’s $6 billion CalPERS payment from the Pooled Money Investment Account. PMIA holds short-term funds for the state, as well as cities, counties, and other local entities. On its face, borrowing from PMIA is a lot smarter than issuing POBs because the interest cost is much lower.

But in previous recessions, California’s General Fund has had to borrow from PMIA. During Fiscal Year 2009-2010, the General Fund owed PMIA a daily average of $9.6 billion. By lending money to CalPERS, PMIA may find itself unable to provide General Fund loans, just when they are needed the most.

Finally, while the rate on PMIA loans is very low right now, it is also variable. Although we have now had an extended period of short-term interest rates, many of us remember very different circumstances. In Fiscal Year 1981-82, PMIA’s short-term assets earned 12% interest as the Federal Reserve battled inflation. At the time, stock prices were also falling sharply, so borrowing money at variable rates to invest in CalPERS back then would have produced especially disastrous results.

Back in Puerto Rico, borrowing to fund pensions has been a failure. The government is now demanding that both bondholders and retired workers take a haircut. The Employee Retirement System reported a funded ratio of less than 2% last year. Current retirees will have to be paid from employer contributions, while new hires and current employees will be migrated to a defined-contribution plan.

Admittedly California has advantages over Puerto Rico, and some of the worst-case scenarios discussed here are improbable. But proper risk management requires us to consider the improbable. Rather than rushing into this transaction, lawmakers would do well to take the Legislative Analyst’s Office advice to slow down and carefully consider the implications.

(Marc Joffe is the Director of Policy Research at the California Policy Center, which first posted this piece.) Prepped for CityWatch by Linda Abrams.