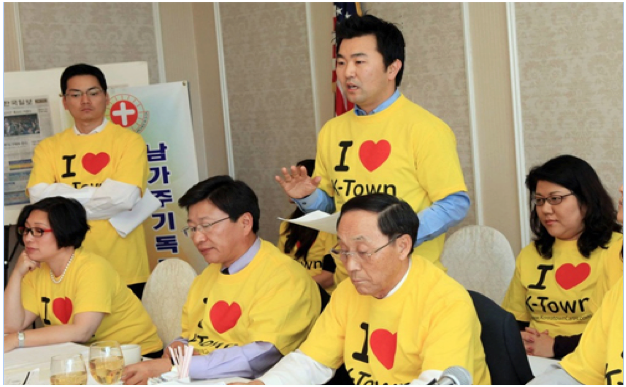 TNN REPORT--Five years ago when the City of Los Angeles Redistricting was finalized, residents of  Koreatown launched a lawsuit, Lee v. City Of Los Angeles (15-55478). It challenged the redrawing of district boundaries with the primary intent of increasing the African American vote within Council District 10. (Photo above: LA Councilman Ryu, standing.)

Redistricting happens every 10 years after the US Census identifies population numbers within particular districts. In order to have fair elections district borders have to be redrawn to ensure that each district has the same number of residents.  In the last census the boundaries had to be redrawn to contain 252,000 residents per district.

The Redistricting Commission of 2011-12 requested input from residents. The Koreatown community organized and mobilized in an unprecedented manner, bringing out  thousands in total to more than three dozen Redistricting Commission board meetings and town halls. They were adamant and clear over their displeasure of their historic use as a donation funding bank for CD 10 Council members including Councilman Wesson -while their issues and concerns remained minimized or ignored.  They introduced a letter allegedly from a local business begging to be released from the constant need to donate.

Research by TNN showed that over a third of the donations to Councilman Wesson came from Korean residents while they represent only 10% of the district. (Redistricting Awakens Koreatown). They were requesting to be released from CD 10 and included in CD 13 the next district over. This would also solve the problem of their Neighborhood Council being divided into multiple council districts.

But by granting this reasonable Koreatown request, a ready source of funding to Councilman Wesson through allegedly pressured donations, would end.

The final result approved by the Redistricting Commission (which was headed by a man who quit his job with Councilman Wesson to head the commission) ignored their request and instead redrew boundaries to not only keep Koreatown and its donations in place but to increase African American voter numbers. The lawsuit contends that using the criteria to increase African American votes is illegal while the City argues it was not used as a criteria.  But evidence might prove their undoing.

From TNN report Aug 2, 2013 -  “A secretly taped video at a Los Angeles Baptist Ministers conference is not going to help Wesson's cause. Despite claims he had nothing to do with redistricting, when Councilman Wesson was asked to come and explain his rumored influence on the breakup of their district, he admitted he had a hand in it. ‘I did the best I could to retain ‘assets’ for all of the districts. One person. Alone. Every member came to me to discuss what they wanted ...’ He went on to claim he had secured assurance that three of the districts would have African-American representation for the next 30 years.”  Article can also be found here.

In addition, in a smoking gun email, a Herb Wesson redistricting appointee said:

“We attempted to protect the historical African American incumbents in this district by increasing the black voter registration percentage and CVAP #s accordingly. As you can discern on the attachment, we were able to increase the numbers to 50.12% and 42.8%, respectively.  This was a significant increase in the black voters in CD 10 which would protect and assist in keeping CD 10 a predominately African-American opportunity district.  ... This move would allow CD 10 to divest itself of this diverse populated area, and increase the AA population to the South.”

Because the Redistricting Commission claimed they were going to give priority to keeping the 95 Neighborhood Councils whole, the Koreatown community used the boundary of the Wilshire Center Koreatown Neighborhood Council (“WCKNC”) district and sought, along with other Asian American communities, including Historic Filipinotown and Thai Town, to be kept together in a single council district in order to keep similar immigrant populations with similar language needs.

In 2012 Koreatown residents filed a lawsuit accusing the city of redrawing the boundaries for a predominantly racial intent. It was denied but Lee v. City Of Los Angeles (15-55478) is still ongoing and awaiting a ruling from the Ninth Circuit Court of Appeals.  The three judge panel led by the Honorable Alex Kozinski heard oral arguments at the stately Pasadena Courthouse in January 2017.  But the appellants’ attorneys requested that the judges wait until the United States Supreme Court ruled on Bethune-Hill v. Virginia State Board of Elections before ruling on the Lee v. City Of Los Angeles matter.

The Virginia Legislature had redrawn district lines packing more than 55% African American voters into various districts in order to minimize the African American presence in other districts.  This would dilute the vote of neighboring districts with less African Americans allowing the voter numbers to skew Republican. The legislature argued that they used traditional criteria such as keeping equal numbers of people within the districts and that boundary lines were continuous avoiding strangely shaped districts, often a sign that gerrymandering had occurred.

On March 1, the United States Supreme Court ruled and it doesn’t look good for the City of Los Angeles. It was unanimous in its decision held in Bethune-Hill v. Virginia State Board of Elections that even if traditional criteria were met it didn’t mean that racial criteria wasn’t a predominating factor – which isn’t allowed.

The United States Supreme Court decision bolsters the Lee appellants’ arguments that the City’s boundary lines for City Council District 10 were drawn for unconstitutional racial purposes and therefore should be void.  The City’s argument- that since traditional redistricting criteria were met, the racial intent claims have no merit - is no longer a winnable argument after the Bethune-Hill decision.

No amount of rationalization of traditional redistricting criteria explanations will be able to obfuscate what was plainly and openly done during redistricting.  The LA Times Editorial Board called it “an exercise in power politics, not democracy.” LA’s flawed redistricting process, Los Angeles Times Editorial, February 17, 2012

“...Angelenos should by now recognize the gap between the official story -- that the process was transparent and decisions were made publicly -- and the all-too- obvious reality: Line-drawing was the result of backroom deals, using private criteria, and Wesson and the other officials who drew the maps protected themselves from accountability for their decisions by cynically hiding behind their redistricting commission appointees. Some of those appointees no doubt intended to be independent; others no doubt knew full well they were on the panel to do the bidding of the elected officials who appointed them.”

The Ninth Circuit Court of Appeals ruling should come out soon and will certainly be worth reading.  Hopefully, the Lee v. City of Los Angeles matter will be remanded allowing a trial to go forward.

Justice is not easy nor quick, but worth the fight.  Justice comes at the cost of perseverance and tenacity.

As of this date, a judgment had not been reached.

(Dianne Lawrence is the editor and publisher of The Neighborhood News.   Grace Yoo is an estate planning attorney, who attended more than 90% of all the 2011-2012 Redistricting Commission meetings, and was a 2015 candidate for city LA Council District 10.)