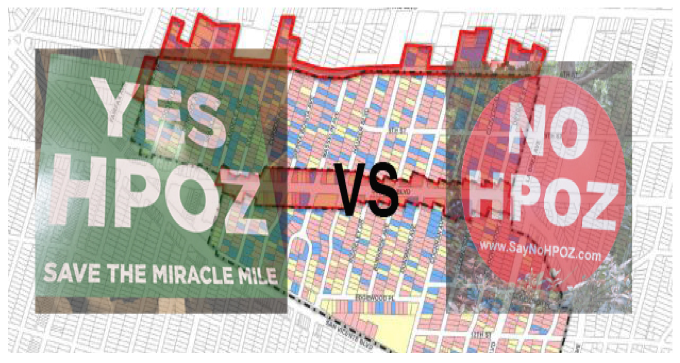 Walters and the HPOZ supporters got just that, but not without a bruising neighborhood battle about land use and development over the past few months – ever since the City Planning Commission, led by Garcetti appointee David Ambroz, turned the tables on the HPOZ organizers in December by excluding prime strips of the map in order to satisfy developers. These strips had already been certified as part of the HPOZ by the Cultural Heritage Commission. That remapping was, for the most part, undone by PLUM to the cheers of the pro-HPOZ group.

It was like being at a wedding: with the anti-HPOZ audience sitting on the left side of the council chamber and the pro-HPOZ attendees seated on the right. There were row and rows of supporters for each position. Up front, at the public comment microphone, committee chair Jose Huizar limited comment to fifteen minutes for each side. That was plenty of time to experience the passion and the anger that had turned a quiet, peaceful, charming neighborhood into a mini-civil war battlefield.

How the neighbors will reconcile remains to be seen. As Councilmember David Ryu (CD4) has said about prior community conflicts in his district: “you’re all going to be seeing each other as neighbors every day, even after you get, or don’t get, what you want.” He was a matchmaker in this one, weighing feedback from both sides. Along with his support for reinstating the excised boundaries, his colleague and City Council President Herb Wesson (CD10) agreed to reinstate the strips excluded by the CPC along Olympic Boulevard in his slice of the Miracle Mile.

Reconciliation may be slow to come because the stakes were so high in this dispute; it was seen, perhaps simplistically, as property preservation versus property rights.

Along the way, the organizer of the HPOZ, the Miracle Mile Residential Association, was challenged by leaders of the start-up group Say No HPOZ in what may have been a prelude to an attempt to try and take over the residential association. That got nowhere, except for the eventual formation by the “no” group of “Miracle Mile Forward,” which could be seen as a pro-development, anti-HPOZ organization seeking to institutionalize their voice in the community. They could continue to build support and become another community megaphone as the adjacent museum construction projects at LACMA, the Academy’s Movie Museum, and Metro’s new subway station help change the character of the Miracle Mile. With the major new museum buildings, and the addition of a Purple Line Extension subway stop at Wilshire and Fairfax, the very territory that the HPOZ is protecting will be subject to demand for redevelopment -- if owners are willing to sell their properties.

This land use and development fight is hardly over, despite the win for the HPOZ side. Ryu has characterized the situation as a combination of preservation of a neighborhood’s identity “while still providing for new housing opportunities along a major transit corridor.” He describes what he has wrought as “a flexible HPOZ for the area.”

The next opportunity for the new group to weigh in on what’s happening in the community may be when LACMA’s Draft Environmental Impact Report for their campus makeover is released. The Miracle Mile Residential Association has already submitted a lengthy letter full of questions and concerns to the County, following the public scoping meeting held at LACMA last August.

In the end, PLUM agreed to reinstate most of the excised boundaries and also to approve HPOZ status: a double win for the pro-HPOZ group and a disappointment for the anti-HPOZ group. PLUM sent a motion to the full city council that was unanimously approved on Tuesday, March 28. An ebullient HPOZ Chairman Mark Zecca said, “We do this not just for ourselves, but for generations to come who will hold dear that this very important part of Los Angeles was saved for them.”

As for Rita Walters (photo left), a catalyst and activator for the winning side, MMRA President James O’Sullivan simply says, “From our first meeting with her in her home I knew we had found a valuable ally and a new friend. Her quiet counsel and her willingness to dig in and get involved was the shot in the arm we needed. Aside from that, it is always a pleasure to talk to someone who has walked the walk and has the kind of history on her side as Rita does.” It didn’t hurt that Ms. Walters also has the sharp eye of a connoisseur who knows a “jewel” when she sees one.