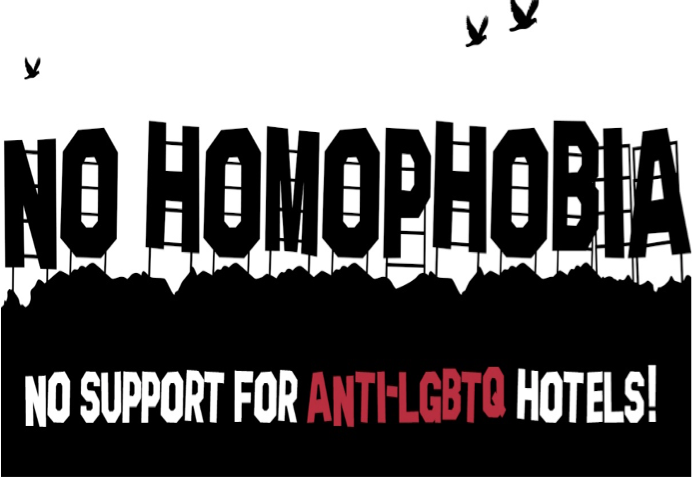 GUEST COMMENTARY--“Welcome to the Hollywood Ivar Gardens Hotel. We don’t like gays and lesbians or same-sex couples. We oppose a women’s right to choose. We think transgender people are dangerous.”

Any hotel that posted a sign like that outside its entrance, especially in Los Angeles, might have a hard time filling its rooms or attracting customers to its restaurant. No hotel would risk undermining its business with such bigoted marketing. But a proposed hotel project in Hollywood, currently awaiting approval from the Los Angeles City Council, is led by a company whose president is closely tied to one of the nation’s most extremist anti-gay and anti-choice advocacy groups. 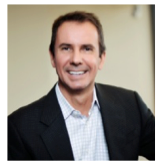 Bill Wilhelm, (photo left) the president of R.D. Olson Construction, based in Orange County, serves on the executive council of Legatus, an extremist anti-gay organization masquerading as a network of Catholic business leaders. Wilhelm generally keeps a low profile, but he’s proud enough of his role in Legatus to include it in his profile on the company website.

Legatus was founded in 1987 by Tom Monaghan, the founder of Domino’s Pizza and a leading funder of right-wing causes. Its membership is restricted to top corporate executives. It claims to have several thousand members in 80 chapters throughout America and in Europe. Its website describes Legatus as “a unique support network of like-minded Catholics who influence the world marketplace and have the ability to practice and infuse their faith in the daily lives and workplaces of their family, friends, colleagues and employees.”

Legatus’ annual meetings are comprised of a who’s who of right-wing activists, politicians, and business titans. At its 2010 summit meeting, it gave George W. Bush a “pro-life” award. Also in attendance were Newt Gingrich and Thomas Donahue, president of the U.S. Chamber of Commerce. In 2012, Bush returned as speaker along with Sen. Marco Rubio (R-Fla.), William A. Donohue, president of the Catholic League (a conservative lobby group), and J. David Karam, president of Wendy’s International, Inc. Another guest speaker at a 2014 Legatus gathering was Helen Alvaré, who has called same-sex marriage “a horrid natural experiment in our country.”

In 2013, Bob Newhart, the actor and comedian, cancelled his gig at the Legatus Summit in Orlando, Florida. A lifelong Catholic, Newhart has a history of working with LGBT people and storylines. In 1976 The Bob Newhart Show featured a groundbreaking episode with an openly gay character. So it is likely that Newhart was unaware of Legatus rabidly anti-gay views until several petitions urging him to back out of the event were circulated by progressive and LGBT groups pointing out Legatus’ extremism. 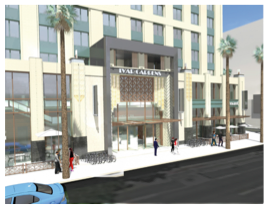 If it approves this hotel deal, the City Council would be putting money in Wilhelm’s pocket -- some of which might find its way into Legatus’ coffers to promote its bigoted agenda.

America has a long history of protest against companies run by people who support bigotry of different kinds. Local activists in Los Angeles are waging a campaign -- Say “No” to Homophobic Hotels – to urge the City Council to reject RD Olson’s development project. If they are successful, their effort could have ripple effects across the country, where the two RD Olson firms have a portfolio of completed hotels projects and a pipeline of projects in the works. Many of the hotels they build are run by major hotel chains with high public profiles, like Holiday Inn and Marriott, who wouldn’t want to face an organized consumer boycott because of Wilhelm’s ties to Legatus.

Some groups oppose the Hollywood Ivar Gardens Hotel project on the grounds that the firm has made no commitment to guarantee that the construction jobs and the permanent jobs in the hotel and commercial space will reflect the diversity of the Hollywood area. Others believe that there is a better use for that site than yet another fancy hotel. Under the site’s existing C4 zoning designation, the City Council could insist that it be used instead to construct much-needed mixed-income housing to help address LA’s severe shortage of affordable apartments.

(Peter Dreier is E.P. Clapp Distinguished Professor of Politics, and chair of the Urban & Environmental Policy Department, at Occidental College. He is an occasional contributor to CityWatch.) Prepped for CityWatch by Linda Abrams.