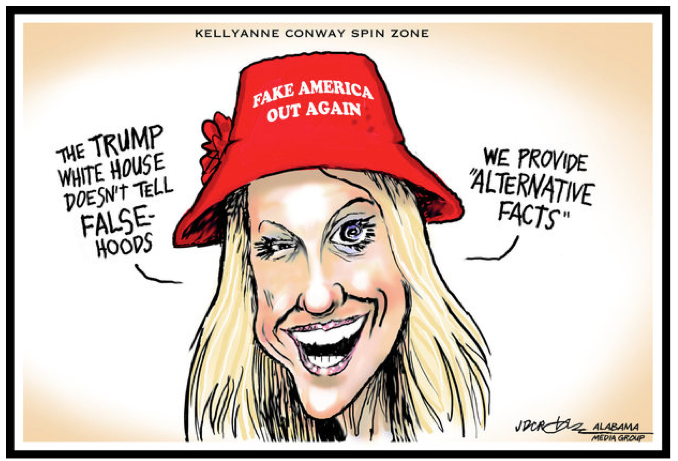 Logic is incorrect because the belief that people operate on logic is false. Experience shows that people accept as true information which pleases them. The more the news pleases them, the more likely that they will believe it.

The path for Alt-Right news had been paved by the mainstream media which had perfected Alt-News to an art form. While some newspapers followed the Who, What, When, Where, Why, How format, many newspapers such as the Hearst Publications and Los Angeles Times did not. From its start, a main purpose of the LA Times was to promote the agenda of whoever was in power – be it the railroads, oil tycoons, or real estate developers.

Objectivity did not rate high in the LA Times’ pantheon of values. Today’s historians know that during the so-called Zoot Suit Riots in 1943, the Mexican-American youth were primarily the target of the violence by the servicemen whose anger was fueled by LA Times Alt-News machine.

“The mobs may have operated with the tacit support of local law enforcement, but they earned the explicit praise of the Los Angeles press. On June 7, the Los Angeles Times ran a story with a lead paragraph that read: "Those gamin dandies, the zoot suiters, having learned a great moral lesson from servicemen, mostly sailors, who took over their instruction three days ago, are staying home nights." August 29, 2012, KCET, Los Angeles' 1943 War on the Zoot Suit by Nathan Masters, http://bit.ly/2mK7sjI In reality, the Zoot Suiters were primarily the victims and not the perps, but that news would not make Anglos feel good.

Because the LA Times is one of the Rembrandts of Alt-News, it realized that many stories had to be factual. Thus, any item which did not impact the financial interests of the rich and powerful could be faithfully reported. When time for dissembling arrives, the art of omission is employed. Since Garcetti’s election in 2001 as councilmember for Hollywood’s council district 13, the LA Times has accepted almost every piece of BS in support of his Manhattanization of Los Angeles. People are lead to believe that the increase in housing prices is due to a high demand for housing despite facts to the contrary. It was only in 2004-2007 that the LA Times attributed the nationwide increase in housing prices to high demand and ignored the trillion dollar mortgage frauds which were deceiving people into believing that there were millions of home buyers all across the nation.

Since LA is owned by real estate developers, the LA Times comes out with the same Alt-News now that it pushed upon people before the Crash of 2008.   According to the LA Time’s Alt-Fact, LA’s housing problem is lack of supply. In a rather typical Alt-News article in July 2016, the LA Times wrote:

“Yes. Like most things, it’s a supply/demand situation. The number of [housing] starts hasn’t been able to take care of that pent-up demand. The pricing has gone up accordingly, and that has been accommodated by low [mortgage] interest rates. Continued low interest rates have in essence subsidized a rapid ascent in pricing.”

In reality, the cause of Los Angeles’ escalating housing prices is not supply and demand. As the LA Times knew or certainly should have known, LA had glut of higher end apartments constructed in the last decade.

Here’s an HCIDLA Report from Nov, 2015: “The average rent in Los Angeles is $2,031 while new apartments built in the preceding ten years rent for $2,609 and have a 12 percent vacancy rate; a 5 percent vacancy rate indicates that supply and demand are in balance. At these rental rates, families must earn $81,240 to afford the average rent and $104,360 to afford a newly built apartment. In reality, the Los Angeles median income is only $50,543 and the current living wage of $15 per hour translates to $26,254 in annual wages; both wages leave a tremendous wage gap for workers seeking to rent in Los Angeles. The high vacancy rate for newer, more expensive housing exemplifies the disparity in the type of housing being built demonstrating that new, higher cost housing, is out of reach for many Angelenos.”

Thus, the LA Times would appear to have been intentionally publishing Alt-Facts that there was a shortage of housing and that shortage was pushing up housing prices. Omitted from the LA Times article was the fact that the City had demolished over 21,000 rent controlled houses since 2001 and that in 2013, the City was constructing only 37% of the housing needed for low income people. Those figures were verboten because people would be able to see that the only housing shortage was for the very poor and that was due to the City’s destroying their homes:

Then, we see the entrance of Donald Trump, who is his own 24 hr Alt-News Service via Twitter. I suspect that during his stay in LA as editor of Breitbart, Steve Bannon saw the extreme gullibility of readers of the LA Times. Although I’ve never spoken with Bannon, I fantasize that he was green with envy that the LA Times could publish Alt-Facts with impunity.

Under Trump-Bannon, however, Alt-News is no longer like your Grandfather’s Buick. His variant of Alt-News is more aggressive -- like a souped up Dodger Challenger without a muffler. His Alt-News is obviously fake. Maybe it was part the Revenge of the Nerds Syndrome. Sick and tired of the Alt-News of BS publications like the LA Times, he was going to use Right Wing Alt-News to destroy “News” itself.

This is a dramatic change. Bannon is not old man Hannity ranting stuff like the senile uncle one has to invite to Thanksgiving. Trump is not only Twittering Alt-Facts at us, but Bannon even has Missy Kellyanne Conway tell the entire world that they are Alternative Facts. Then, he sends out Herman Goebbles look-a-like Herr Stephen Miller commanding us not to question. Did Herr Miller start with “Actung, ich befehle Sie” or is that just my imagination?

Bannon has launched a war on Americans’ consensus of reality. Building upon over a 100 years of sophisticated Alt-News distorting reality so that the public would vote for it own demise, Bannon-Trump have made America unsafe for reality. Herr Miller is correct – Truth is what Trump says it is – do not question.

In what may be the most brilliant display of the destruction of reality came with Rachel Maddow’s March 14, 2017 release of Donald Trump’s 2005 Tax Returns. Had Maddow adhered to Honest Journalism 101, she would never have mentioned these phony documents. When one thinks of Ben Bradley, Bob Woodward and Carl Bernstein and their extreme efforts for confirmation, the rash stupidity with which Maddow hyped her having “Trump’s Tax Returns,” one feels sick. One never brings forth a document unless one has proof that the document is what it purports to be? There are accepted modes of confirmation. Step number one is to read, step number two is think. Standing alone, these two pages reeked of “set up.”

To aggravate this deplorable breach in journalism, David Cay Johnson tells Rachel that he has no way to authentic the documents since they “came over the transom.” In journalism, that ends the matter. Woodward and Bernstein did not print what Deep Throat said without confirmation.

One needs to emphasize the enormity of Maddow’s malfeasance. Even if it should later turn out that these two pages are genuine, that is not the real point which is: Maddow did not abide by the tiniest bit of journalistic ethics before standing before the entire world proclaiming these two pages to be genuine copies of Trump’s 2005 federal income taxes. In light of the favorable light in which the 2005 tax returns cast Trump, they are more likely Alt-Tax Return leaked by Donald Trump.

This sad episode shows how little regard people have for truth. We live in a world of Alt-Facts where honesty plays no significant role.

The use of Alt-Facts is ingrained in American life. The Trump-Bannon regime is forcing us to confront reality by its incessant and unrepentant use of falsehoods.

(Richard Lee Abrams is a Los Angeles attorney and a CityWatch contributor. He can be reached at: [email protected]. Abrams views are his own and do not necessarily reflect the views of CityWatch)