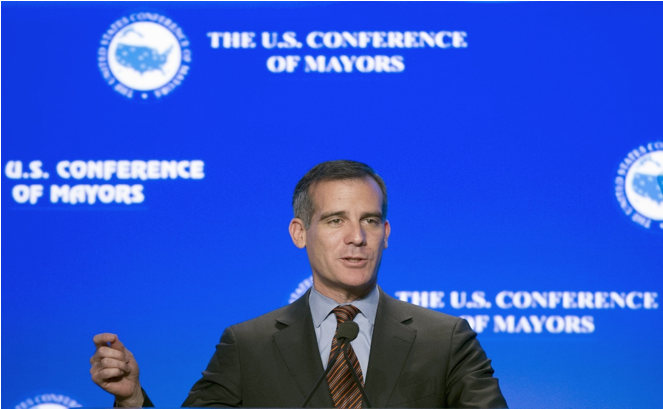 ELECTION 2017-“What’s the biggest problem facing LA today, and what would you do to solve it?” That’s the question Mayor Garcetti answered last week in a groundbreaking, single-question interview with the LA Times.

Check it out. You’ll know what we mean before you even hit “play.”

It’s not what the Mayor says in the video but what surrounds him, which are videos of the other mayoral candidates -- eight of the ten, to be precise -- answering the same question. Finally a clean shot for Angelenos to recognize the candidates if they fall over one.

And the mayoral videos are a hit.

The 2012 televised mayoral debate posted on YouTube (in two videos) has been viewed collectively 2131 times, and that’s over the course of three years.

By contrast, the eight, two-minute videos posted on the Times Opinion Facebook page have been viewed collectively 4130 times, and that’s after only ten days. (But that’s not because of the mayor, whose viewership is average.)

The televised debate, meanwhile, was a disservice to the public, excluding every candidate except for “the Big Four” (“no comment”), based on a criterion the moderator could not bring himself to state on air and which cannot be found on the website to which he directed the audience.

People are just excited to hear what the candidates have to say -- and they say really interesting things. We look forward to meeting them in person.

All this is great, but it’s just a start. And heads up to the rest of the press because you’re about to have a scrum of mayoral candidates knocking on your door. Two minutes is the magic number. That’s all we need. However you want to do it.

But we’ll be taking notes, so….