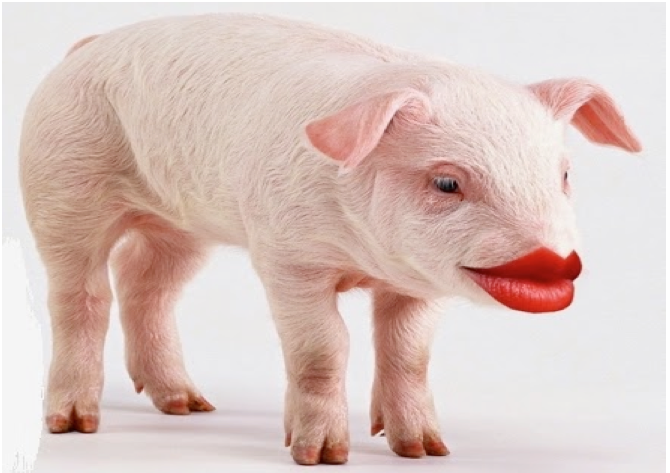 CORRUPTION WATCH-Finally, someone is opposing Eric Garcetti in his bid for re-election as mayor of Los Angeles in March 2017. It is Mitchell Schwartz with his new side kick, The Developers’ Pig, Erika G.

Erika G first appeared with candidate Mitchell Schwartz on January 4, 2017 in front of the Department of Water and Power building in downtown Los Angeles. I found Ms. G, however, to be so fascinating that I decided to interview her for this CityWatch edition.

First, I need to report that Ms. G clarifies that she is the former Developer’s Pig, but she is her own gal now. Her job was to help developers’ scarf up as many billions of tax dollars as possible. Ms. G explained, “Even a pig has to have some self-respect.” Adding that she thought her lipstick was just the proper shade of red, Ms. G complained that the Garcetti-DWP Bill of Rights was a lot of hog wash, and “I know hog wash when I see it.” She continued to explain that Los Angeles has become such a cesspool of corruptionism that she cannot stand it. “Development does not have to mean corruptionism,” she explained. 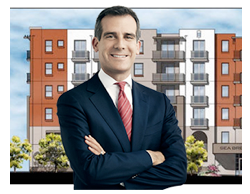 Ms. G continued that after wallowing in the developers’ muck all these years, she desired to take a bath so she trotted off to the DWP. “But at those prices, who can afford water?” she lamented. Ms. G related that the City Hall skims cash off the top of the DWP’s take from its customers. If the DWP hadn’t been paying tribute to the crooks at City Hall all these years, it could have afforded to fix the pipes beneath our streets without raising rates.” She added, “Every time you look at your DWP bill, you should realize that a considerable portion is being skimmed by City Hall. “Garcetti didn’t put that into his DWP Bill of Rights,” she snorted.

Ms. G said that as the Developers’ Pig, she learned a lot of the inside dirt which she’ll be sharing with voters in the upcoming weeks. “Where’s the missing $424 million from the Hollywood-Highland Project? Hiding with Judge Crater?”

Ms. G said the public wants answers to questions like, “Just what did Developer Leung buy with his $60,000 to Garcetti’s charity?”

Why did Garcetti give $17 million to CIM Group for their illegal project at 5929 Sunset Boulevard?

How do extortion and bribes interact with development projects in Los Angeles?

Asked what she could do to fix corruptionism in Los Angeles, Ms. G pointed out that the new mayor has great power. “Yes, Virginia, there is a U.S. cavalry to ride to the rescue,” Ms. G shared with us. “It’s called the FBI.”

Without going into detail, Ms. G said that we can see for ourselves that a new mayor will have great power. The new mayor will have access to all the city’s files including all the communications with the developers and their agents. The FBI has criminal jurisdiction over such corruption and Mitchell Schwartz, as the new mayor, can share all the information with the Feds. “I’m very good at finding dirt,” said Ms. G.

When queried about that the Schwartz Administration would be like, Ms. G cryptically replied with the Mel Brooks’ line, “May the Schwartz be with you.”