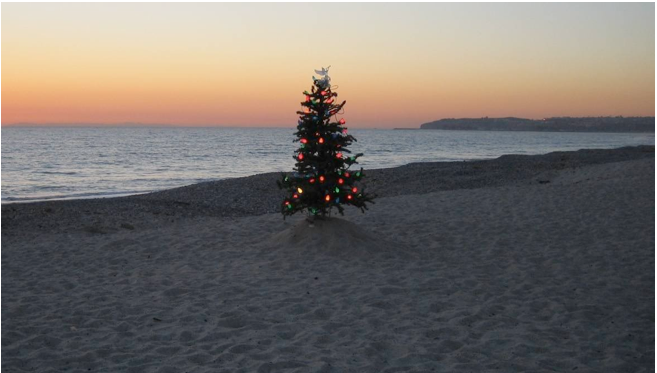 AND A PARTRIDGE IN A PALM TREE--I'm a typical American Jew--my tribe came up with most of the Christmas carols we love so much (we also came up with Superman and Batman ... so there!), and I just LOVE Christmas.  I love the lights, I love the spirit of giving and family togetherness, and I love the slowing down to just breathe a little.  I also appreciate the Christian spirituality, which really isn't so far removed from the rest of us.

But as a father and husband, a transportation/planning advocate, and a pro-family advocate (and that includes kids!), I've got my own "wish list" for the twelve days of Christmas.  I could have gone for a Hannukah/Chanukah/Hanukkah (choose your favorite spelling) wish list, but that would only be eight days ... and what fun would that be when I could have twelve wishes instead:

TWELVE parks for the City of Los Angeles--and I don't mean pocket parks, but rather BIG open spaces that is the size of about 1-2 blocks.  I'm spoiled by Mar Vista and Palms Parks, and I want a new one for each sector of the City, with a mega-big Downtown Central Park for the two districts serving most of the Downtown area (we could make this 13 for each district, right?)

ELEVEN days of a rescheduled LAUSD school year that allows for a school year starting closer to Labor Day (NOT mid-August, you knuckleheads!), and/or allowing for a balanced school year with a two week (or perhaps 10-day) break in the spring combined with a smaller winter break.  The LAUSD Board promised a fix to all this, and then they lied to us by reneging on that promise.

TEN Community Plans a year updated as is consistent with the Bylaws of the City of Los Angeles, to preserve single-family neighborhoods, place height limitations and direct moderate densification along our major commercial corridors to properly allow for an increased population.  No excuses!

NINE redeveloped industrial zones to create jobs for Angelenos and other Southern Californians. Industrial isn't always ugly, and even if some folks believe it is, then the jobs those zones create will mitigate for that "ugliness". Not everyone is a lawyer who will work at home--people need middle-class, sustainable, and stable careers involved with manufacturing.

SEVEN more required years of work before any City, County, or State public worker can retire with full benefits--unless these workers have either saved more, given up vacation time, are physically unable to work or be retrained for other jobs demanding less physical labor.  Maybe we all "deserve" to retire in our mid-50's, but we can't afford to pay for pensions as we're doing now.

SIX percent as the assumed earnings that public sector pension funds should presume before demanding that the taxpaying base be charged for the extra costs of pensions.  We're going broke, folks, and this isn't a game--unless city/county bankruptcies, and insufficient state funds to meet our budgetary requirements is something we all want to see more of.

FIVE percent switching from our K-12 budget to our state college budget, in that our bloated, horrifically and tyrannically self-serving public education unions would have to live within their means while allowing taxpayers contributing to our UC and Cal State colleges a chance to affordably pay for their children to get a college education.

FOUR new smart bus stations (not just benches or stops) each month for our most frequently-used bus connections to establish a roof/shelter, appropriate seating (or not) that doesn't encourage homeless encampments, advertisements for local neighborhood councils, LED announcements for when the next bus is coming, and with plug-in features for cellphones.  Bus riders deserve respect.

THREE stories as the goal for our City (with the exception of Downtown and a few major commercial corridors) to focus on as the limit for housing projects to achieve affordable and desirable housing for our growing population.  Unless we're talking luxury high-rises, anything over three stories isn't a home...it's a crud-hole.  STOP it, overdevelopers and enabling politicians!

TWO new county supervisors, and with a redistricting that allows for more appropriate representation for the geographies of our very large L.A. County...and knock it off, you racist cretins, if redistricting is something desired by ethnicity and not geography.  Our county and city is race-obsessed (a New Racism, if ever there was one) enough as it is.

ONE new wonderful Neighborhood Integrity Initiative to pass in the spring to put the brakes on overdevelopment and require a legal and sustainable and environmentally-friendly development process in the City of the Angels.

Merry Christmas, Happy Hanukkah, and Happy Holidays and New Year to All!

(Kenneth S. Alpern, M.D. is a dermatologist who has served in clinics in Los Angeles, Orange, and Riverside Counties.  He is also a Westside Village Zone Director and Board member of the Mar Vista Community Council (MVCC), previously co-chaired its Planning and Outreach Committees, and currently is Co-Chair of its MVCC Transportation/Infrastructure Committee. He is co-chair of the CD11Transportation Advisory Committee and chairs the nonprofit Transit Coalition, and can be reached at  alpern@marvista.org. He also co-chairs the grassroots Friends of the Green Line at www.fogl.us. The views expressed in this article are solely those of Dr. Alpern.)