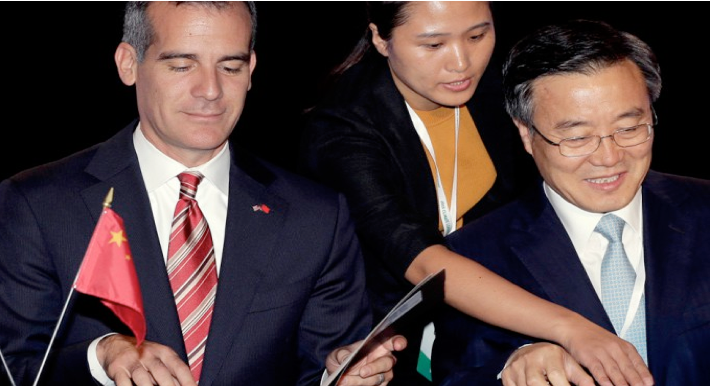 In an address to the C40 Cities Climate Leadership Group, Mayor Garcetti committed LA to being among the first cities to explore and pursue every possible strategy for doing its part to limit global temperature rise to 1.5°C — the scientifically accepted threshold for a dangerous level of planetary warming — as laid out in the Paris Climate Agreement. Mayor Garcetti has also instructed his Chief Sustainability Officer to analyze existing GHG reduction targets in the Los Angeles Sustainable City pLAn — including 80% GHG reductions by 2050 — and identify additional strategies to achieve a target that scientists view as critical to stemming climate change impacts that include sea level rise, extreme heat, and drought.

“Every city, every community, every individual has the power to fight climate change,” said Mayor Garcetti. “We do not need to wait for any one person or government to show us the way. Acting together as cities, we can set an example for our neighbors, spur clean energy innovation, clean up our air, and speed up the inevitable transition to a low-carbon, opportunity-rich future for us all.”

The Mayor also unveiled plans for Los Angeles, San Francisco, Portland and Seattle to leverage city vehicle fleets to demonstrate substantial demand for electric vehicle (EV) purchases from major auto manufacturers — potentially leading to orders for more than 30,000 EVs. Los Angeles is already home to the country’s largest municipal EV fleet, and has the most aggressive procurement policy of any city in the United States — requiring 50% of all annual sedan fleet purchases to be fully electric.

Mayor Garcetti and 39 other U.S. mayors in the Mayors National Climate Action Agenda (MNCAA) have signed an open letter to President-elect Donald Trump to declare continued action and collaboration toward fully implementing the Paris Climate Agreement.

“Simply put, we can all agree that fires, flooding, and financial losses are bad for our country, that we need to protect our communities’ most vulnerable residents who suffer the most from the impacts of climate change, and that we all need healthier air to breathe and a stronger economy —  rural and urban, Republican and Democrat  —  and in terms of our domestic quality of life and our standing abroad,” the MNCAA mayors wrote.

C40 is a network of the world’s largest cities committed to close collaboration and knowledge-sharing to drive meaningful, measurable action on climate change. At this year’s 2016 C40 Mayors Summit, city representatives and sustainability leaders are gathering in Mexico City to advance urban solutions to climate change.

(This article was provided CityWatch by the office of Los Angeles Mayor Eric Garcetti.)