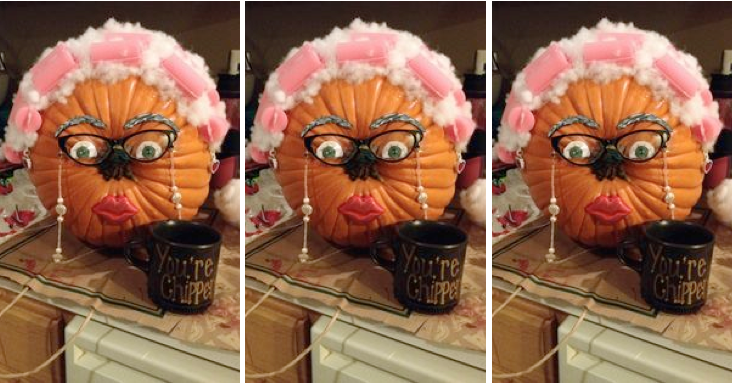 It's Halloween and the fate of the Republic is in our hands. A double whammy, if you dare.

There’s much talk about how little talk there has been about public education in the presidential election. I guess the Russians just aren’t interested enough in American education policy to dump emails on the topic.

One leaked email did have particular relevance to public education though. David Dayen in the New Republic calls it “the most important Wikileaks revelation.”

A month before the 2008 presidential election, a senior Citicorp executive sent his appointment picks to Obama advisor John Podesta. Those preferences included Arne Duncan as Education Secretary. Duncan, who put the public-education-as-a-competitive-marketplace on steroids. So destructive was Duncan that his legacy is that the decades-in-waiting revamp of the Elementary and Secondary Education Act removes most of the power from the Secretary of Education.

Flash forward to 2016, when some education activists are crying foul that their union leaders might be, well, leading. Randi Weingarten and Lily Eskelson Garcia appear to be having discussions about education with Hillary Clinton. For shame!

While many education advocates are grateful that the frontrunner’s advisors this time around include actual educators, the more militant activists see something nefarious. They could be relieved, though, that leaked emails show that the Clinton campaign recognized Rahm Emanuel as a liability for the civil war he has stoked against Chicago public schools. These are indicators that we might be in for some change of thinking about public education policy if Love Trumps Hate.

You do need WikiLeaks to see that education issues are out in the open in other elections.

Massachusetts is having a hu-u-u-ge public debate about lifting its charter cap, which even LAUSD ex-pat and Boston Supe Tommy Chang opposes. Elected officials in that state, from mayors to Senator Elizabeth Warren, oppose lifting the cap, and the massive out-of-state and decidedly right-wing money backing “Question 2” has raised eyebrows enough to show the charter agenda is about a lot more than charter schools.

In Oakland, the charter group deceptively named Parent Teacher Alliance (the same PAC that ran the disgusting campaign against LA school board veteran Bennett Kayser) gave money to an anti-rent control group. It’s connections like this that show the charter lobby has far bigger interests than putting students first, or in this case, even under a roof. 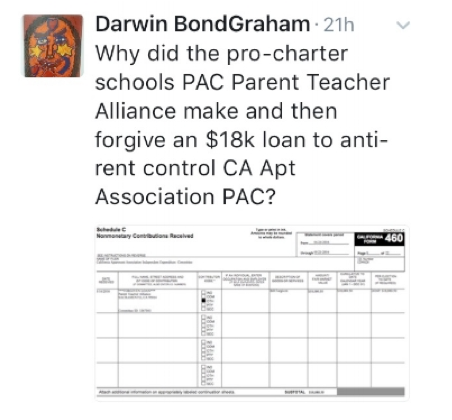 Salon reprinted a post from Capital and Main about what those billionaires really want out of the charter industry (and a third installment is coming soon).

Closer to home, local reporters continue to help the CCSA get its point across to the public. KPCC touted the highest priority of the charter lobby: to transfer the power of charter authorization away from those pesky elected school boards. Afterall, it would be a lot easier for the charter lobby to control one appointed state board than to pick candidates in so many messy local elections for school districts up and down the state.

That drew the ire of Curmudgucation, a.k.a. Peter Greene, who had a thing or two to say about Kyle Stokes’ framing of the board as the fox in charge of the henhouse. This notion is lifted right out of the charter lobby's playbook.

I’m no reporter, but, no, simply asking school board members for reactions to the CCSA's talking points does not count as in depth reporting.

The public deserves a fuller picture of the inherent conflict between the CCSA and LAUSD. The school board is elected by the public to oversee public assets and investments of the school district. The fact that the board is pushing back against the massive giveaway to charter school corporations is a result of voters throwing out the rubberstamping board members of yesteryear. Presenting CCSA's perspective without explaining that its mission is to displace the public school system is misleading at best.

The time is NOW to make it clear that our own elected leaders are the only officials who should authorize schools in our district. Tell your elected officials at every level how important this is. It's the week before a presidential election. Chances are, you'll be hearing plenty from them in the next few days. And the backers of the agenda to have someone else make those decisions are so wealthy, they could easily slap it on the next ballot.

LAUSD does not always make it obvious that we're looking out for our schools either. For example, why is this neighborhood school advertising Great Public Schools Now's takeover of the district as just another parent choice? Is somebody in LAUSD wanting to give away our schools?

It's confusing enough to find our who's on our side. Take a look at this convoluted web: 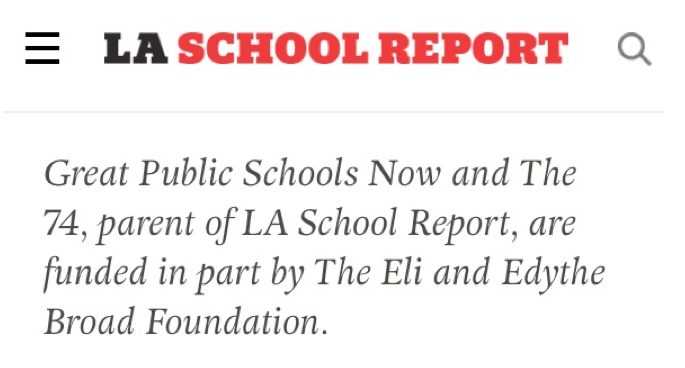 Button your hatches! In my neighborhood and all over the west side, the CCSA has paid parent organizers and a group called SpeakUp Parents! infiltrating grassroots school groups, promoting *choice* and trashing the district for being non-responsive to parents. Are they in your neighborhood yet?

Did you see this? PSconnect got mentioned in the Washington Post for fighting on behalf of Los Angeles public schools!

Please support our public programs. We really want to engage the community in discussion about the issues that matter for the survival of public education in Los Angeles. We've lined up awesome speakers! Can you donate $10 today?