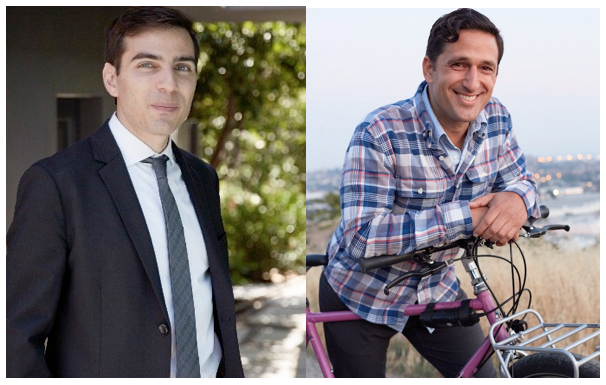 TRUE TRANSIT SUPPORTERS-I’ve been taking a bit more transit than usual these days, as a bit of a change of pace from pedaling the Brompton absolutely everywhere.

My changes of pace, by the way, never involve a private motor car, which I drive four or five times a year under marital duress; I’ve put in enough miles behind the windshield -- that is to say, over a quarter-million or so -- to know exactly what I’m missing by avoiding the driver’s seat, and it is absolutely nothing. Physical and emotional stultification just don’t tickle my innards.

So there I was on the Wilshire Rapid, making good time to my dentist’s office in SaMo, when we crossed Westwood Boulevard. And of course the intersection hosted a lineup of people on bikes, waiting to proceed to UCLA. A cyclist had just gotten off the bus, presumably for the same purpose; bikes were rolling up and down Wilshire; and the bike racks around the intersection were full to overflowing.

It naturally brought to mind the lack of bike lanes connecting UCLA with the new Expo Line station at Westwood. This vacuity comes to us, of course, courtesy of chair-warmer District 5 council member Paul Koretz, who has been kowtowing so vigorously to a cabal of Cheviot Hills homeowners that he probably needs a live-in chiropractor. The Chevioteers failed in their attempt to block the entire Expo Line -- yes, they tried to hold the entire western half of LA County hostage to their fear of “those people” crowding onto the train to steal their porch decks -- but cyclists are an easier target than ethnic groups, especially since “cyclist” is often (in white pseudo-suburbia) a code word for “dark.”

Saving car lanes and parking was the ostensible excuse, but that excuse flew out the window when Ryan Snyder presented a bike lane plan that removed no car lanes or parking, cleverly entitled the “Remove Nothing Plan.”

“Remove Nothing went nowhere. Koretz and his puppeteers ignored it, and Koretz went further, saying he would permit no study to be made of any plan including bikeways of any sort on the southern portion of Westwood.

People will be riding bicycles on Westwood anyway, and probably slowing traffic in a way they wouldn’t with a bikeway in place. Angelenos old and young, of every shade, will want to get from the Expo Line to UCLA, and, of course, the many delectable restaurants along the way. Fewer will choose to do so lacking a bikeway; a number of those will opt to use cars, further clogging traffic. Stoopid, ain’t it? Opportunity misplaced.

I won’t call it a lost opportunity, though, because I think we can find it again, and soon; it hasn’t been lost, but simply hidden from view for a while. After all, Jesse Creed is running against Koretz for the council seat in CD5, and he is a strong supporter of transportation choices, including bikeways. He himself endeavors to pedal anywhere within a two-mile radius of home.

Remember that, come March and the election. If you live in CD5, Creed’s the real deal. (Photo above, left.)

Naturally, if you live in CD1, the home district of this blog, its Joe Bray-Ali, running to retire “Roadkill Gil” Cedillo. (Photo above, right.)

If you live anywhere else, send a little cash to these two gentlemen. Two more progressive voices added to Huizar’s on the city council might be enough to transform LA. No more rubber stamp votes against the future! Bray-Ali and Creed for City Council!

Grass roots vs. trickle down: which side are you on?

(Richard Risemberg is a writer. His current professional activities are focused on sustainable development and lifestyle. This column was posted first at Flying Pigeon.) Prepped for CityWatch by Linda Abrams.