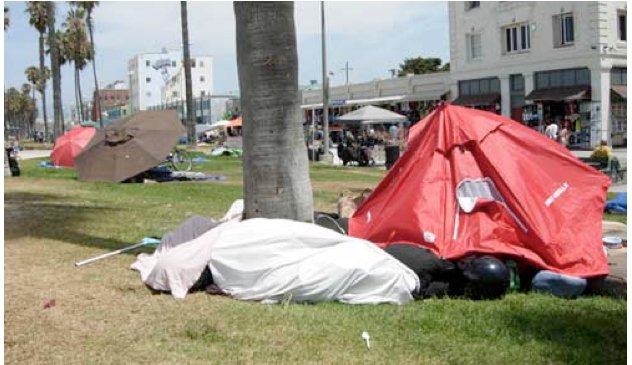 Since the camp was on Cal Trans property, we asked for and received support from our State Assembly Member. The CHP posted warnings before arranging for the removal of the personal items and trash – there was a considerable amount of the latter.

I was not around to witness the intervention, but there is every reason to believe it was handled as responsibly as possible. No complaints were filed; no reports of violence or excessive force.

The North Hollywood side of the 170 has a homeless problem of its own, too, especially along Tujunga Avenue, where a dozen or so RVs and vans have become permanent fixtures, and homeless prowl the grounds of the Amelia Earhart Regional Library.

While I am pleased by the removal of the Valley Village Park camp, I acknowledge society’s failure in dealing with the underlying problem.

The knee-jerk reaction would be to cast a vote for the city’s proposed $1.2 billion bond measure, the objective of which is to acquire land and construct housing. It is certainly preferable over a parcel tax, but the cost ultimately still flows through our property tax bills.

But I am not ready to support handing the City Council (or the County Supervisors, for that matter) massive amounts of money when there is no outline or plan to organize, manage and, most importantly, perform timely audits of effectiveness. I would feel a little optimistic if the activities were supervised by financially responsible officials – competent individuals, say someone comparable to City Controller Ron Galperin. Unfortunately, there isn’t enough of Ron to go around.

Whatever the plan, if it does not recognize the distinct challenges posed by the two major component groups of the homeless population – economic victims and those afflicted by mental illness or substance abuse – it is doomed to fail. The plan must allow for triage: the chances of helping the former group are far greater than the latter. $1.2 billion may sound like a lot, but it is less than $50K for each of the estimated 26,000 homeless. How much housing and services can $50K buy?

We need to focus, then, on making the maximum impact and accept the fact there will be many who are beyond assistance. I am referring to the persons who require institutionalization. Sadly, our laws prevent involuntary medical intervention.

Progress has its own issues, too. There is truth to the line from the film Field of Dreams, “Build it and they will come.” Even if we achieve a degree of success, there is a risk: we will create a magnet for new waves of homeless persons from other regions, which would offset, if not overwhelm, our capacity to deal with the problem.

Triage is the practical approach, then. Help the homeless in manageable increments. Also, a one-size-fits-all style of housing will not work. Everything from dormitories to well-organized, military-type camps must be considered. Experimentation will be required. We should not hand over a billion dollars until officials can provide evidence of success on a limited scale first.

Lastly, we must not dig ourselves a deeper hole. It is absolute insanity to encourage the destruction of serviceable, affordable housing units, as the city presently does. I was heartened to hear the news that the Neighborhood Integrity Initiative received many more signatures than necessary to qualify for the March 2017 ballot. Without it, our elected officials would be content to create the next generation of homeless in exchange for campaign contributions from developers.

And you are unlikely to find a homeless politician in this city or any other.