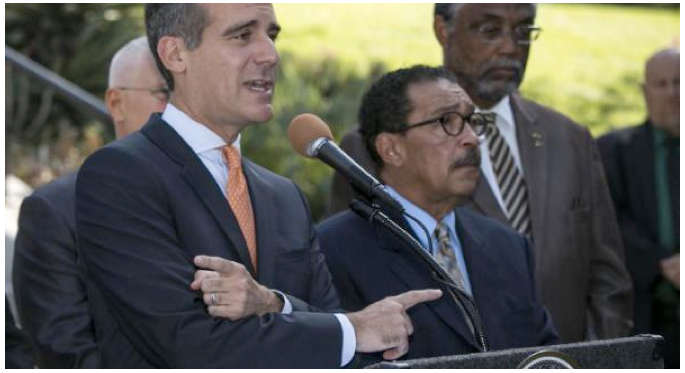 CORRUPTION WATCH-Eric Michael Garcetti is the City of Los Angeles’ current mayor. Garcetti was first inflicted upon us in 2001, as councilmember for Hollywood’s Council District 13. Starting in 2006, Garcetti was President of the City Council until 2012, when he stepped down to run for Mayor. Thus, Eric Garcetti is LA’s longest serving elected official.

When Garcetti arrived, Los Angeles was progressive and full of hope. It was the #1 destination city in the entire nation. Now, Los Angeles is more than half way through its second decade of decline. We have gone from the most desirable urban place to live to the least desirable.

For some reason, Angelenos fail to understand the connection between massive corruption and LA's shrinking influence in American life. They are oblivious to the fact that corruption drives away business. When businesses leave, we lose workers; and with the departure of professional and middle class business workers, our tax base suffers.

Employers know what is happening, even though Angelenos are sleep walking through life. One reason for the different perceptions is that most employers look at mathematics when making decisions. Angelenos, on the other hand, look at traffic. If traffic is bearable, then things must be OK.

Angelenos who realize that LA has the worse traffic -- not only in America but also Europe -- lull themselves into complacency thinking that more subways will solve traffic congestion.

What Angelenos do not realize is that traffic improves when people move away and the type of people we lose is very important. Los Angeles no longer attracts the smartest and brightest in the leading sectors of the economy. We have fallen to #60. Our low ranking is not due just to our density and high cost of living. San Francisco places #2 and it, too, is dense with a high cost of living. New York ranks #14 and Chicago is #43. Yes, with its cold, wind, snow, and incessant murders, Chicago still beats out LA. Check out this recent article on NewGeography.com by Joel Kotkin and Michael Shires.

When employers look at an urban area, they assess a multitude of factors but they always project decades ahead. They do not want to relocate again in 10 to 20 years. They seek stability and permanence. They want a place to "bet on" and Los Angeles is a bad bet!

We have a mayor and city council that wage war on the vital facets of the good life which all significant businesses need in order to attract and retain highly qualified employers: (1) decent single family homes and (3) decent schools.

After fifteen years of Garcetti, we need a new mayor. The next mayoral election is March 2017, which in political life is just around the corner. At that time, the Neighborhood Integrity Initiative will also be on the ballot so that we can all focus on Garcetti’s manic obsession to Manhattanize Los Angeles.

But who could run? Yikes! There is no one. Here are three who have bellied up to the bar.

First, we have Michael Schwartz. Ho hum, there is really nothing bad to say about Michael.

Second, we have YJ Draiman, who is a curious person. His son, David’s, father was born in Israel, but apparently YJ was not. How does that work? Enough with all the closets already. Oh yes, here’s what YJ says about himself: “YJ Draiman is a former Real Estate developer with over 20 years’ experience; he has worked extensively in gentrifying neighborhoods.” Wow, with the NII and YI on the same ballot, this should make the election interesting. (NII = Neighborhood Integrity Initiative to slow down development corruptionism in LA.)

Third running is Steve Barr, who has apparently confused the City Council with the School Board. Why?

The one thing these three candidates have in common is that none of them will be LA’s next mayor. That leaves us searching the LA City Council for someone.

Bonin? A nice guy who also believes that LA should become Manhattan and that an annual subway deficit of $8 billion would be a good idea. He wants more bike lanes in major thoroughfares to maximize the air pollution that cyclists inhale and to further aggravate traffic congestion.

Koretz? He’s been around and has too much baggage.

Krekorian? He tore down Marilyn Monroe’s home rather than let it be moved to a safe place. He’s dead meat.

What could a new mayor do?

Facing the LA City Council which operates as a criminal enterprise in violation of Penal Code § 86, the mayor has very little power. He can veto projects but with “unanimous voting,” anything can be passed. He can appoint certain department heads, but developers will still purchase bogus EIRs which the City Council will approve.

The only real power a new mayor would have is what Teddy Roosevelt used so well -- the bully pulpit. A new mayor would have the platform to advocate for reform. The City Council structure needs to be re-done so that vote trading is structurally impossible. The mayor could place “Quality of Life” as Los Angeles’ top priority rather than its current goal: the City’s Manhattanization and developers’ profits.

No mayoral candidate is thinking of making Quality of Life even a factor in the City’s decisions and virtually no Angeleno is bold enough to set forth the radical idea that people matter. Instead, there is near universal agreement that we need to destroy the homes of poor people and give billions of dollars to real estate developers. Welcome to favela LA.

(Richard Lee Abrams is a Los Angeles attorney. He can be reached at: [email protected]. Abrams views are his own and do not necessarily reflect the views of CityWatch.) Edited for CityWatch by Linda Abrams. -cw