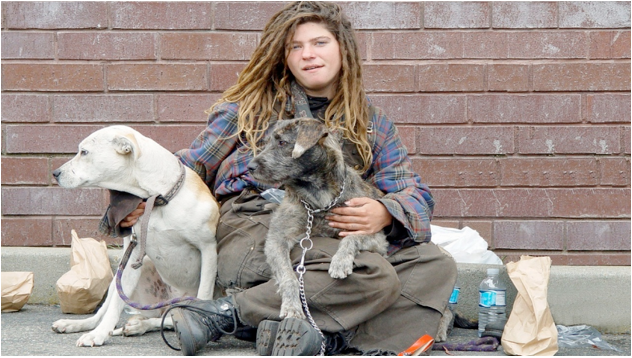 Here are some of the highlights of the program, which has very noble -- albeit idealistic -- goals:

"Pets and homelessness are linked in many ways," we are told. “People living on the streets often rely on their pets for emotional support and companionship. Low-income families struggling to pay rent often also struggle to care for their beloved family pets." Thus, resources and services will be provided "to enable more people and their pets to stay housed. Fewer pets will enter the Los Angeles shelter system and fewer unwanted litters will be produced.

“ICLC, DDR and LAAS want to make it known that no matter what a person's housing or financial situation there are ways [to] keep pets with their people.”

This statement is a little unsettling because, although it does not directly say so, it implies this is always advisable.

It is unclear what legal services Inner City Law Center will be providing to homeless pet owners -- but it is hoped there will be an emphasis on legal responsibilities of pet ownership, including public health and safety and humane care. The only description is that, “ICLC will provide space at its office on Skid Row.” (The Inner City Law Center website lists only one office at 1307 East Seventh Street.)

The Pet Resource Center will be open one day per week and will be run by volunteers for Downtown Dog Rescue, a highly respected organization headed by Lori Weise, who has dedicated over 20 years to providing assistance -- with an emphasis on spay/neuter -- to the pets on Skid Row, in all downtown LA areas, and also in Compton.

Here is the list of services offered by the Pet Resource Center:

This program will only reach a few of the thousands of homeless persons in LA with pets, but it promises tremendous benefits.

It also poses important questions to residents and taxpayers of Los Angeles.

Do you think homeless people should have dogs/pets?

This question was posted recently on the Weddingbee.com site by a woman in NYC, who explained:

“I don’t think homeless people should have dogs. I live in NYC, and there are a lot of homeless people, and a number of them have dogs. While most of their dogs are very well behaved, my dog and I got attacked by an unleashed pit bull owned by a homeless person. I sustained a bite. The homeless person didn’t have any vaccination records for the dog. Of course the dog didn’t have any rabies shot tag. He didn’t have a cell phone that we could reach him on. I asked the police to help us, but they said they couldn’t do anything. We called center for disease control and reported the incidence. I couldn’t give them any information about the dog, except for its name and the owner’s name, no known address. I had no health insurance at the time (working a contract job and not married), so I couldn’t afford the $10,000 rabies shot. The CDC told me that the dog had to be observed 10 days after the bite to make sure it didn’t know any symptoms of rabies, and if it didn’t, I would be fine. . . .What happened is probably an anomaly, but that’s the main reason why I don’t like seeing homeless people with dogs. What do you bees think about this?”

Most responders felt that the value to the homeless person of having a pet far outweighed any occasional transgression that affected a human or another animal.

However, most also had the opinion that the homeless owner is “saved” by the pet, that the pet has a great life of attention, is often “fed before its owner eats,” and/or that having a pet causes a homeless person to be more responsible because of he or she has someone to love.

Is a dog/pet’s life with a homeless person humane?

In his photo series, Skid Row Stories,” a vignette by John Huang describes a homeless woman whose life included tragic physical and emotional abuse since childhood. He wrote,“‘I thank God for everything,’” she told me as she shared her dog food with other Skid Row residents who couldn’t afford to feed their pets today. She leaned forward from her wheelchair and bent down to kiss her dog. 'I love animals,' she said. 'They're always there for you.'"

He later added: “Update: I visited Cheryl to give her some supplies. Sadly I found out her dog was stolen. Part of the reality of being homeless.”

Cheryl’s dog (a mid-size terrier) may have been stolen. Or, it may it have been left unleashed and unattended and wandered or run away. The presumption that it was stolen relieves her of any responsibility or guilt for the loss. Homeless people often have a series of dogs.

One of the issues that MUST be addressed in any program involving the City issuing microchips and “registrations” for the homeless is that the dog is often someone’s lost pet which was found and not reported or taken to the shelter, as required by law, to be redeemed by a grieving owner.

Will any pet discovered to have a prior microchip or license be impounded for the legal notification period (to allow transfer of title) before LAAS issues a new “registration” to the homeless person?

Does anyone want to think of their lost pet tied in -- or to -- a shopping cart being pushed down a trash-filled street by someone who may be unable to care for him/herself?

Los Angeles Almanac reports that in 2015 the homeless demographic in the City of Los Angeles showed the following characteristics:

Will the Inner City Law Center's attorneys assure that animals whose legal ownership is being given to a homeless person through their program receives the same standard of treatment required of other pet owners?

If the homeless pet owner neglects the animal, abuses it or beats it during a fit of rage, will ICLC take action to have the helpless creature removed and the owner prosecuted or banned from having another animal? Or, will their duty be to the person who was 'temporarily out of control' and should be allowed to keep his/her pet?

An LA Times article, “Hounding a Homeless Man into Giving up his Dogs,” portrayed the 2014 struggle by compassionate and concerned animal rescuers to have a Pit Bull and her ten puppies removed from a homeless man, Gerrick Williams, who was keeping them in a cardboard box on the sidewalk.

Even though City officials were inundated with emails alleging that Miller was operating a puppy mill for profit, General Manager Brenda Barnette said LAAS could not seize the dog and her 10 puppies because they were not “illegal.”

A few days after agreeing to allow the shelter to temporarily hold the dogs for him, Miller was arrested on a drug possession charge and sentenced to a year in a rehabilitation program. He told the Times reporter by phone, "This is a lot better than the streets."

A shelter employee described the mother Pit Bull as “shy and her belly and teats sagging from having litters.”

"If people are struggling, homeless and have addictions, another responsibility is not appropriate," Whitney Hope Smith, a rescuer who videotaped Miller's camp, told the Times. "It's very easy to give a sob story for homeless, but the endgame for the animals isn't pretty."

What Do You Think?

There is no question it is good to have spay/neuter, vaccinations, micro-chipping and licensing easily available for pets of the homeless. But how will these voiceless animals be protected, if necessary, from the actions or inactions of those who are mentally unstable, irresponsible or cruel after they are granted legal possession by the City and their whereabouts is unknown?

Another serious concern is who would be held liable if dogs the City assists in placing and "registering" with the homeless attack, injure or kill other animals or a human?

Important basic questions that have not been debated by the public are whether the homeless should be held to the same or lesser standards of care and responsibility for pets, and who will speak for these animals’ legal rights to safety and humane treatment?