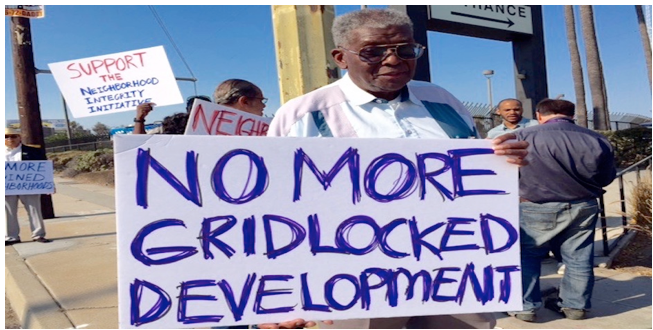 VOX POP--The Coalition to Preserve LA announced Wednesday that the Neighborhood Integrity Initiative is heading for the March 2017 ballot, marking an unprecedented push by residents to take control from for-profit developers who are wielding far too much power over what Los Angeles becomes.

Backers of the citizen initiative today delivered just shy of 104,000 signatures to Los Angeles City Hall, nearly double the number required, and predicted that their measure will easily qualify for the ballot.

At a press conference in South Los Angeles at the site of the illegally approved mega-development known as the Cumulus Skyscraper, residents of Baldwin Hills, West Adams and nearby areas condemned City Hall’s rigged development system.

Dove Pinkney, a member of the Crenshaw Subway Coalition and the longstanding New Frontier Democratic Club, said of Cumulus, “The community should not be overwhelmed by people who are just in it for the money.” Veteran Los Angeles Sentinel columnist Larry Aubry warned, “There’s a corporate takeover of Los Angeles,” underway by developers. Aubry said that City Hall’s rigged system is hurting residents not just in South L.A., but citywide.

Damien Goodmon, a key supporter of the Neighborhood Integrity Initiative and executive director of the Crenshaw Subway Coalition, said, “Development should be for us. Development should not displace us. Folk are getting pushed out because the City Council is busy building luxury housing.”

The March 2017 measure directly targets the City Council’s failure to plan for the city’s infrastructure, parks, and housing needs, and its severe bending of the rules to approve mega-developments that overwhelm local streets and destroy neighborhood character.

The Council’s failure to create and follow a modern “General Plan” common in well-run cities, and the City Council’s back-room dealmaking with wealthy luxury housing developers, have led to widespread destruction of affordable housing — while creating a massive luxury housing glut in Los Angeles.

According to the city Housing Department’s own data, L.A. has a staggering 15% to 20% vacancy rate in the thousands of luxury units built in the past 10 years. Yet overall rental vacancy rates are just 2.7%, and even people with good jobs can’t afford a place to live.

The City Council and city planners have allowed the demolition or conversion to condos of 22,000 affordable housing units since 2000, the city’s data show, much of it standing in the way of luxury housing developments. The real estate industry has showered the City Council and mayor with money — including $6 million in campaign contributions since 2000.

Opal Young, a member of the Baldwin Hills-Crenshaw Homeowners Coalition, said of the planned Cumulus skyscraper, which does not include any affordable housing, “The building that is proposed to be built totally overwhelms the community.” It would soar 320 feet in a neighborhood of single-story homes and two- to four-story businesses and apartments. The skyscraper would be surrounded by a fortress-like complex of 10-story luxury office towers.

Nearby resident Nadine Angele said that allowing developers to radically alter a community’s character is no way to create a livable city. Angele said the Los Angeles City Council and mayor hold “a trusted position. They should be ashamed for approving a 320-foot tower. It’s going to push local diversity out.”

Darren Starks, president of the Baldwin Neighborhood Homeowners Association, and Clint Simmons, a member of Expo Communities United, both touched on the massive gridlock the skyscraper will bring to already overwhelmed streets including La Cienega, Venice, Jefferson and Washington boulevards.

Yet, Starks said, “When this project was initiated, we residents were never contacted.” Simmons, an engineer, slammed the project as “a community wrecker” filled with luxury housing — some place the future rents at $4,000 per unit — not intended for people in the community.

Residents from other parts of Los Angeles spoke in solidarity with local residents, including Luis Saldivar, a member of the Hollywood United Neighborhood Council.

Saldivar said, “We’re displacing people in Los Angeles [ranging] from South Central to the San Fernando Valley. You need to plan before you build. You can’t build, build, build.”

The Neighborhood Integrity Initiative has attracted donations from more than 200 small givers citywide averaging about $25 each, as well as $20,000 from former Mayor Richard Riordan, who calls the current City Hall planning system “a train wreck.” The organized opposition to the Neighborhood Integrity Initiative, led by the Chamber of Commerce, has attracted a handful of donors — two of them billionaire developers.

About 30 of the measure’s supporters last week met with Mayor Eric Garcetti to provide him an opportunity to announce his own long-promised reforms of the broken system at City Hall.

Jill Stewart, campaign director for the Coalition to Preserve LA, said Wednesday, “We appreciated the meeting with the mayor, but since April, Mayor Garcetti has not announced any notable reforms that would alter the Wild West system that’s destroying neighborhood character, displacing thousands of people, and wiping out precious older affordable housing.”

The March ballot measure requires the City Council to immediately begin writing a “General Plan,” and to include the communities in creating 35 Community Plans that address and create a plan for the city’s aging infrastructure, overtaxed safety services, sewers, water supplies, parks and housing needs. It would ban developers from choosing the consultants who write the Environmental Impact Reports for their own proposed projects, an obvious conflict of interest. The measure would place a two-year timeout on City Council back-room deals that let a small cadre of developers get around the rules.

(Patrick Range McDonald writes for the Coalition to Preserve LA)

Join our citywide, grassroots movement by clicking here right now to donate any amount you wish, and follow and cheer our efforts on Facebook, Twitter and Instagram. You can also send us an email at [email protected] for more information.